Hasbro has a bright future ahead of it.

Recently, toy maker Hasbro (HAS -0.65%) released its second-quarter results. It's year-to-date revenue and net income increased 6% and 120%, respectively. These results stem from Hasbro's many strengths. Let's check them out and discern whether or not Hasbro is worth a closer look by Foolish investors.

The brand blueprint
Hasbro's results demonstrate its strong ability to execute on its brand blueprint. Specifically, the brand blueprint involves product innovation, digital media, lifestyle licensing, and entertainment experiences designed to "immerse" the consumer. In other words, the company takes its brand portfolio and leverages it in many directions via product refreshment, online engagement, branding of lifestyle products, and immersing consumers in experiences such as blockbuster movies and television.

On that note, the best and most famous example involves Hasbro's Transformers brand, which dates back to the 1980s. On June 27, Transformers: Age of Extinction was released, and it grossed $891 million so far at the box office, according to Box Office Mojo as of this writing. Transformers contributed greatly to the 32% growth in Hasbro's boys' segment in the most recent quarter.

Hasbro's revenue typically performed well in years right after the release of a Transformers movie in 2007, 2009, and 2011 (chart below). This year will be no different. Consumers see these alien robots on the huge screen and then rush out to buy the toys or encourage friends and family to buy them for the holidays. 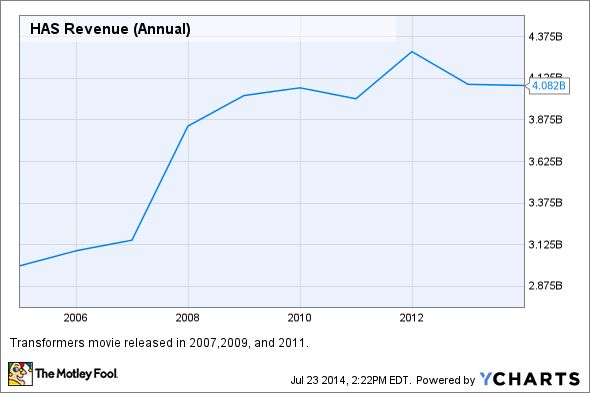 Magic: The Gathering represents another strong brand that Hasbro executives tout as "release driven," which means that it provides a stream of revenue relatively immune to the holiday ups and downs. Magic: The Gathering also engages the consumer face to face and online. This product line remained even this past quarter as fans anticipate the release of the core 2015 set.

Improved Hub profitability
Hasbro owns a 50% interest in a television network called The Hub, which serves an important function in the "immersive entertainment" portion of the brand blueprint. It airs content both old and new based on its popular toy line.

In the most recent quarter, Hasbro's portion of The Hub's profit amounted to $2.3 million. The increase in popularity contributed 5% to the overall increase in Hasbro's operating profitability. This represents an important development in that Hasbro can keep using this network to promote its products.

Foolish takeaway
Hasbro executives feel good about the long-term prospects of the Transformers franchise, especially in China and they plan to expand its distribution to that region over time. Moreover, Hasbro possesses a strong portfolio of brands. The transferable nature of the brands from one generation to the next should ensure superior shareholder growth over the long term. All of these facts make Hasbro worth a closer look by Foolish investors.