Americans are, to put it simply, leading increasingly urban lives. With this key shift in mind, Wal-Mart Stores has begun crafting a strategy to adapt to this important trend and set itself up for continued success in the future. More importantly, this has important ramifications for investors going forward.

A trend tells an important story
Prior to looking at specifics for how Wal-Mart will situate itself in large cities in the future, let's first take a look back at how Wal-Mart has fared with changing store-format strategies in the past. While past events don't guarantee future results, they're a good indicator.

Wal-Mart's discount stores launched in 1962. They averaged 106,000 square feet, and they were successful.

By 1982, baby boomers (born between 1946 and 1964) were beginning to consume and buy homes in the suburbs. This led to Wal-Mart launching its 182,000-square-foot super-centers. Once again, Wal-Mart was successful. The economic boom that followed in the 1980s and 1990s aided Wal-Mart's growth.

In 1998, Wal-Mart wanted to prepare for the future. It launched its first Neighborhood Market (averages 38,000 square feet). It took a while for Neighborhood Market to gain traction, but it has since seen 46 consecutive quarters of comps growth (comps are sales at stores open at least one year.)

Its Walmart Express stores (averages 15,000 square feet) were launched in 2011, and according to Wal-Mart, the pilots have gone very well.

Last year, Wal-Mart launched its college-focused stores (Georgia Tech in Atlanta and University of Arkansas in Fayetteville, Ark.). No results on the college stores have been provided yet, but that's not the point.

The point is that Wal-Mart has succeeded with every format it has launched. Sometimes, it takes years for that success to be recognized. This is why so many people and investors think Wal-Mart is a company on the decline. Its growth is certainly not going to be as strong as in the past, but Wal-Mart should be capable of adapting to an increasingly urban world. In addition, these aren't the kind of stores you would expect. One key example is provided below.

Sleep upstairs, shop downstairs
Did you ever think you would see a day when someone would want to live in a Wal-Mart? The H Street, NW Wal-Mart in Washington, D.C. (83,000 square feet) isn't your average Wal-Mart.

Did you notice the picture at the top of this article? That's what the outside looks like. But that's not what might shock you. The picture below shows the deck and rooftop pool above that Wal-Mart: 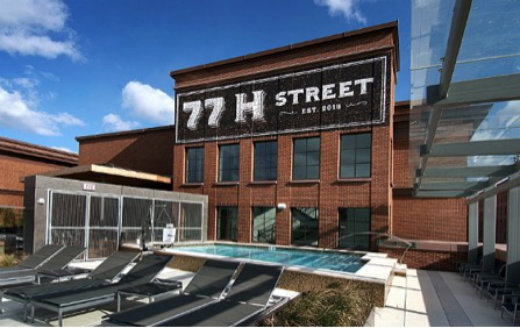 This 303-apartment building also comes with a fitness center, lounge area, a Starbucks, a bank, and a separate entrance for residents. Since this Wal-Mart offers more food than a supercenter, convenience is optimal. In addition, the move looks smart when one considers all the pedestrian traffic the store will attract.

Wal-Mart has another urban store on Georgia Avenue, NW in Washington, D.C. It's 102,000 square feet on 4 acres with an underground parking garage and easy access from the sidewalk. Wal-Mart plans on opening four more urban locations in Washington, D.C. in the near future.

Race to concrete
Wal-Mart isn't the only big-box retailer looking to take advantage of the trend toward urban living. Target has taken the same approach. At the moment, Target (NYSE:TGT) has eight CityTarget stores, and it will soon open a TargetExpress in Minneapolis.

With many retailers downsizing due to the ever-growing popularity of online shopping, it makes sense for Target to go urban. This could eventually lead to a reduction in big-box suburban locations, which would free up capital for newer small-box urban locations.

However, for Target this is still a test. It has no plans on opening any CityTargets in 2014, which seems like a disciplined approach. If the locations that exist are successful, then Target will expand. If not, it can make adjustments before expanding. Not expanding into urban areas would likely be a major mistake.

The dilemma for Target is that it's once again behind Wal-Mart. Target entered the small-box market two years ago, whereas Wal-Mart has been experimenting with small-box stores since 1998. On the other hand, despite the data breach, consumers see Target as offering a more enjoyable shopping experience.

The bottom line
Though it's difficult to see now, the most likely long-term outcome is that both Wal-Mart and Target close under-performing suburban locations and use the freed up capital to invest in their small-box stores. Given living trends, this should lead to increased foot traffic and sales as well as lower costs due to the smaller sizes of the stores.

The key challenge will be getting the merchandise to the stores and consistently selecting the right merchandise for limited shelving space. In the end, brand strength for both companies should carry them through any merchandising missteps.

Twenty years from now, Wal-Mart and Target should still be successes, but they will be very different from how they operate today.