Please ensure Javascript is enabled for purposes of website accessibility
Free Article Join Over 1 Million Premium Members And Get More In-Depth Stock Guidance and Research
By Dan Moskowitz - Jul 31, 2014 at 9:00AM

Promotions are good for shoppers, but they’re not good for retailers. Home Depot has managed to avoid this path despite the hesitant consumer, which is potentially good news for investors.

Generally,big-box retailers Wal-Mart Stores ( WMT 1.08% ) and Target ( TGT -1.86% ) must offer everyday low prices and promotions in order to drive traffic and sales at their physical locations. When this happens, margins contract, which then negatively impacts the bottom line.

Fortunately, Wal-Mart and Target both have future growth channels in e-commerce and small-box stores, but having to rely on promotions to drive traffic and sales at physical stores still acts as a large weight suppressing potential for these two massive retailers.

If you look around the retail space, you will see that  most retailers must rely on promotions in order to drive traffic and sales in today's consumer environment. However, Home Depot ( HD 1.93% ) doesn't fit into this category. Here's why.

Healthy promos
Home Depot offers promotions, but it negotiates deals with its suppliers well. By buying in bulk, it saves on costs and drives productivity in supplier factories. These savings are then passed on to the customer but not to the extent that it significantly impacts margins.

Thanks to a healthy business and a housing market that's holding its own, Home Depot doesn't need to offer promotions on much merchandise like other retailers. It relies on some promotions to drive people into its stores. Those customers are then likely to purchase higher-margin items.

Below is an excellent example of how Home Depot has managed to drive margin expansion better than other big-box retailers over the past five years: 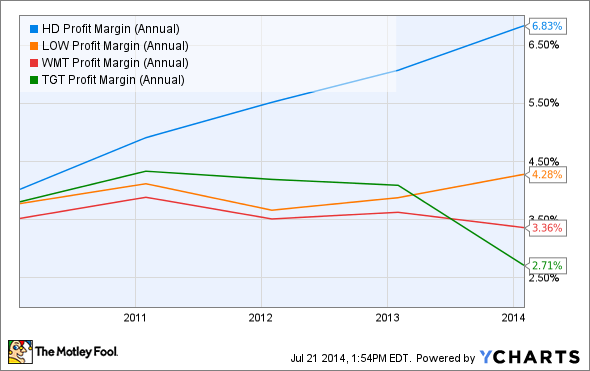 Target's overall performance has been affected by poor performance in Canada, the recent data breach, fierce competition, and a myriad of other factors. Wal-Mart wants to offer the lowest prices, which has the potential to contract margins if it can't cut costs. But don't look too far into this metric for Wal-Mart since it relies primarily on volume. As far as Lowe's ( LOW 1.00% ) is concerned...

Home Depot vs. Lowe's
Lowe's has been performing well, but it's been trailing its larger competitor Home Depot. Not the least of which are returns on invested capital, free-cash-flow growth, and dividend growth.

Here are the return on invested capital and free-cash-flow growth results over the past five years for the two home improvement retailers: 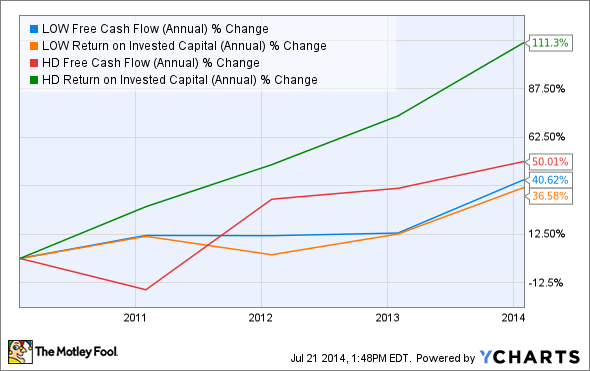 Dividend growth over the past five years: 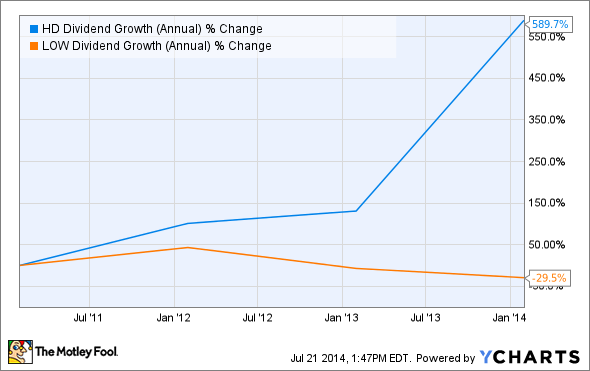 Managing margins and shareholder returns
In the first quarter, Home Depot delivered a gross margin of 35% which, while representing a 5 basis point increase over the same period last year, is essentially unchanged.

This isn't exciting, but it can be for a company that just generated $2.6 billion of operational cash flow in one quarter, with $1.25 billion going to share buybacks and $646 million going to dividends. Going forward, Home Depot aims to increase its dividend annually while using excess liquidity to buy back shares. Those buybacks are important because they reduce share count and improve earnings per share.

Additionally, Home Depot has cut management bonuses, leveraged hourly pay, and is focusing on expenses controls in all aspects of the business. This is part of the reason first-quarter net earnings came in at $1.4 billion versus $1.2 billion in the previous quarter.

The Foolish bottom line
Home Depot is an extremely well-run company. It is capable of weathering the storm for its investors by returning excess capital in the form of dividends and buybacks. If you ignore external factors and focus on Home Depot's performance versus its peers in the current economic environment, then it's a clear winner. It has managed to avoid the fate of many retailers that have gone down the road of promotional initiatives in order to boost sales. This fact, coupled with the company's solid profitability, makes it worthy of a closer look by Foolish investors.