Home Depot (NYSE:HD) and Lowe's (NYSE:LOW) are both well-run companies, but they're also both susceptible to what takes place in the housing market.

Why the housing market matters
There are many different ways to look at housing, but the most important metric is home price appreciation. If home prices are appreciating, then people are more likely to purchase and invest in homes.

In addition, these homeowners and investors will spend money on repairs and upgrades. Of course, the home price appreciation seen today is subtle compared to the housing bubble of the mid-2000s. However, this could be seen as a positive.

Many people assume this means that there's more room for growth in home price appreciation, but mortgage rates are more likely to increase than decline in the future, which would put pressure on housing.

Taken altogether, this can get confusing. That's why it makes sense to listen to someone who likely has a better view of the domestic housing market than 99.9% of the U.S. population. The head of the largest improvement retailer: Home Depot.

Mr. Blake's key points
Frank Blake is the chairman and chief executive officer of Home Depot. According to him on the company's first-quarter conference call, 2014 is still seeing home price appreciation overall (domestically), yet home prices are still very affordable. However, what is perhaps his most important point, as well as what could lead to Home Depot and Lowe's weathering any housing market setbacks, is the fact that U.S. homes are aging quickly. When houses age, they require more repairs. This leads to more consumer visits to Home Depot and Lowe's.

Blake also made several key points about the housing market during the company's 2014 European Investor Meetings presentation on June 2. In regard to affordability, it's still high but trending downward.

In March, 33% of transactions were all-cash, which is higher than the 30% all-cash transactions seen in March 2013. All-cash purchases are often made by investors and high-end consumers. With home prices affordable, it makes sense for investors and high-end consumers to take advantage of the opportunity. This could also relate to Home Depot's first-quarter big-ticket sales.

In the first quarter, transactions for tickets that surpassed $900 increased 2.5%, with HVAC, pro sales, and appliances as the big drivers. Additionally, sales from large pro customers (spend more than $10,000 per year at Home Depot) grew more than twice the company average.

These might seem like small points, but they're not whatsoever. Transactions for tickets that surpass $900 and sales made to customers who spend more than $10,000 per year represent 20% of total U.S. sales each.

While it has been mostly good news up until this point, there are potential concerns. According to the Leading Indicator of Remodeling Activity, solid growth is expected in the home-remodeling market this year, but momentum is expected to moderate in the fourth quarter.

On the other hand, on Home Depot's first-quarter conference call, the chief financial officer stated that the fourth quarter should be Home Depot's strongest for the fiscal year. Also remember that Home Depot didn't meet expectations in the recent first quarter due to severe winter weather. Therefore, it should be easy for Home Depot to show year-over-year improvements in next year's first quarter.

Internal factors rule
Since the housing market plays a big role in the performance of the home- improvement stores, you should be aware of what's taking place and what's expected.

A quality management team will be capable of maximizing potential during good times in the housing market and weathering the storm during bad times. One way to determine the efficiency of upper management is to see if revenue growth is outpacing growth in selling, general, and administrative expenses.

Home Depot's performance over the past five years: 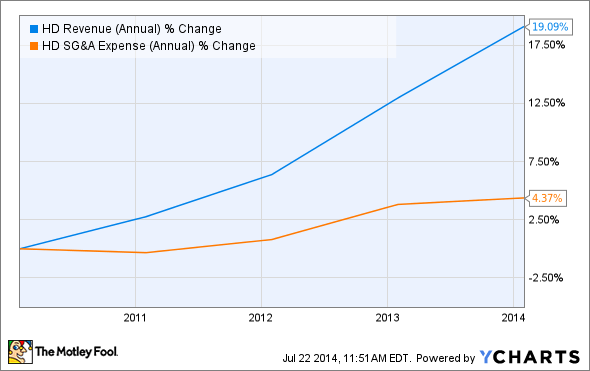 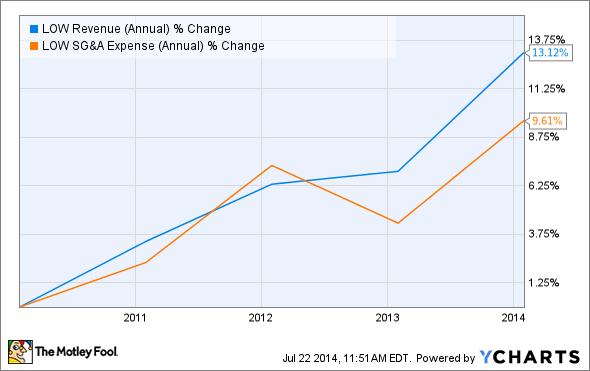 As usual, Home Depot and Lowe's are both impressive, but Home Depot is a little stronger. The company remains well positioned to take advantage of not only home upgrades but an ever-expanding housing market.

The bottom line
Home Depot and Lowe's are susceptible to swings in the housing market. Fortunately, both are well-run and efficient companies. That said, Home Depot is slightly more efficient, which should lead to better navigation through troubled waters. Home Depot has been, and should remain, a top-quality option for long-term investors.