There are many reasons to be more bullish on Home Depot (NYSE:HD) than Lowe's (NYSE:LOW), especially for the near future.

Home Depot offers stronger comps and net earnings growth, and its cash flow generation and return on invested capital are also more impressive. However, it's possible that Lowe's will outperform Home Depot over the long haul for one reason - the Millennial generation.

Urban Versus Suburban
Many millennials (born between 1977 and 1995) prefer urban living to suburban living. With high student debt loads and limited wage growth opportunities, millennials aren't eager to purchase a home. And after witnessing what happened with the housing bubble in 2006, they probably don't trust the stability of the housing market. What does this mean?

First, if more millennials are choosing urban lives (no home or car ownership required), then it could negatively impact the housing market in the future. This would be bad news for home-improvement stores. Second, many millennials who can't afford to live urban are living with their parents. This is also potentially bad news for the housing market and home-improvement stores down the road. But don't take my word for it; listen to Frank Blake (CEO of Home Depot) himself.

Deciphering Blake's comments
During Home Depot's first-quarter conference call, Blake stated that he expects long-term home-price appreciation. However, he has also seen a dramatic drop in household formation since the housing bubble as well as a substantial increase in people between the ages of 18 and 35 living at home.

Blake sees this as a positive because if the job market recovers, it will lead to pent-up demand for homes. He might be correct, but this is an optimistic assumption.

Fortunately, the impact of the millennials wouldn't impact the housing market for many years since there's still a very low supply of homes, which when combined with many wealthy baby boomers and investors bodes well for the housing market. Therefore, Home Depot and Lowe's might still perform well over the next several years, especially with many existing homes aging quickly, which leads to an increased need for repairs. However, there will come a day when millennials are extremely important to home-improvement retailers. Which begs the question, how will Home Depot and Lowe's adapt to this brave new world?

It better be good
The future of home improvement retailing, as the millennial generation becomes increasingly important, will hinge on social networking and technology.  This is where there's a large divergence between Home Depot and Lowe's, and it's one of the few areas where Lowe's is better situated for the future.

The first thing you need to understand is that 40% of Home Depot's sales come from people spending at least $900 per year. These are mostly professional contractors, not everyday consumers.  Therefore, it makes sense that Home Depot offers a Pro Xtra loyalty program, which now has more than 1.5 million members. Pro Xtra provides customers with the following: discounts on useful business services, exclusive product offers, and streamlined and receipt tracking tools.

Notice the exclusive email offers and special promotions. According to a recent study conducted by Barkley, 50% of millennials will go out of their way to look for frequent shopper reward programs. Additionally, only 43% of millennials will continue to buy brands they grew up with.

It's all about the deal for this demographic, which represents $1.3 trillion in consumer spending annually (21% of consumer spending) and 25% of the population. In other words, it wouldn't be difficult for Lowe's to steal millennial customers from Lowe's or simply to get to them first. Lowe's already has a big advantage with its MyLowe's rewards program.

Numbers to know
Prior to making your investment decision between these two home-improvement behemoths, you should know that Home Depot is currently outperforming Lowe's in several key metrics. These include free cash flow and return on invested capital: 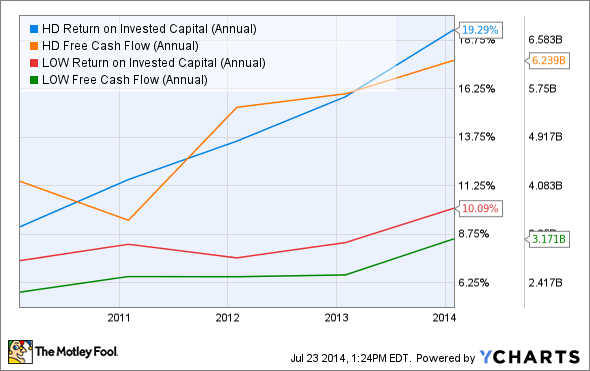 If Home Depot continues to outperform Lowe's in these areas, then it will lead to more opportunity in organic and inorganic growth as well as more generous capital returns to shareholders via dividends and share buybacks. Furthermore, Home Depot delivered first-quarter year-over-year comps growth of 2.6% during a difficult winter (severe weather), whereas Lowe's only saw comps grow at a 0.9% clip.

The bottom line
Home Depot is a stronger company than Lowe's at the moment, but Lowe's has set itself up well for the most important -- and largest ever -- consumer generation. If you're torn about where to invest, Home Depot has more potential now and for the next few years, but keep an eye on developments surrounding the way each company attempts to capture (and keep) millennial consumers.