By now, most people know the story of Microsoft's (NASDAQ:MSFT) "lost decade." Generally referencing Steve Ballmer's reign at the company and hallmarked by a market capitalization stuck in reverse, it's a cautionary tale of a company becoming too complacent and overly wedded to a core product.

However, as is true in many cases, common conceptions are misconceptions. And while mistakes were made, the shocking cause of Microsoft's "lost decade" isn't Steve Ballmer – it's actually Microsoft investors.

Perhaps it's time to admit that Ballmer's time at Microsoft wasn't a disaster. Source: Wikimedia Commons

In defense of Steve Ballmer

Steve Ballmer is in many circles considered an affable second-place finisher. He's a real-life version of Charlie Brown, with Apple's Steve Jobs pulling the football out from under his kick at the last minute. And to be fair, he's done some things to deserve this caricature – among them, laughing at the iPhone when it was in the nascent phases and spearheading the Surface RT disaster that resulted in a $900 million writedown.

But that doesn't mean Ballmer didn't have successes. After taking the reins of Microsoft early this century, he grew revenue 10% a year, from $23 billion in 2000 to $62.5 billion in 2010. Not only that, he grew Microsoft's bottom line 7% per year and instituted a dividend policy that went from $0.08 a share (split adjusted) in 2003 to $0.52 per share by 2010. Overall, this seems like a solid, albeit not flashy performance. However, as far as market capitalization goes, this is what happened to the company: 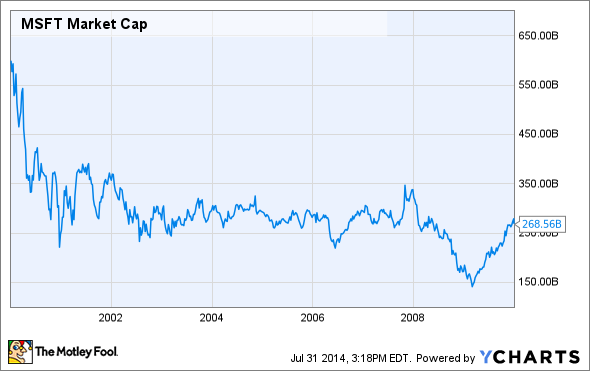 A victim of the times ... and past success
In many aspects, Microsoft was a victim of the times and its own past successes. The PC revolution of the '90s continued a tremendous period for the software king, forming one part of the "Wintel monopoly" -- with Intel supplying the chips and a multitude of OEMs -- Hewlett-Packard, IBM, and Dell -- providing the finished product. The company was such a formidable foe in operating systems, the U.S. government eventually filed an antitrust suit against Microsoft for anti-competitive behavior.

Not only that, it was a time of "irrational exuberance" (read: bubble) in the tech markets, with any company with the words "net" or ".com" in them becoming overnight successes. A great example of the times was AOL's purchase of Netscape, paying $4.2 billion for a mere browser. It seemed as if Silicon Valley was minting millionaires daily.

Wall Street and Main Street got the memo; they may have not understood the technology, but they understood a hot investment. By 1999, Microsoft was valued well more than a half-trillion dollars, clocking in as high as $620 billion. Bid up by aggressive and irrational investors, Microsoft traded at more than 70 times earnings. In order to bring its PEG, or price-to-earnings growth, ratio down to one, it would have to grow earnings an astonishing 70% per year over a five-year period. That's a tall order for any company, let alone one that reported $8 billion in net income in fiscal 1999. 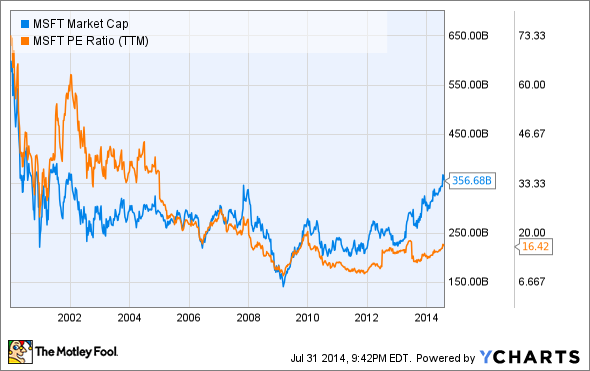 You want 70% growth; I'll give you 7%
Eventually, the bubble burst. A minor recession, Sept. 11, and several high-profile tech failures forced investors to look at tech companies with a more critical eye. As a result, Microsoft's lofty valuation tumbled.

In the meantime, the company's performance was a mixed bag. XP's late 2001 launch was considered a success, the company launched the Xbox video gaming system, and the antitrust case was finally decided. On the other hand, operating income barely budged. It came in lower than the 2000 total in two out of the next four years, and it was barely higher the other two.

Net income growth during the first half of the decade was hard to come by. Hurt by legal settlements and losses on the cable investments more than core operations, Microsoft's net income didn't exceed its 2000 total until 2005.

By 2006, Microsoft traded at a more reasonable P/E ratio of 20 times earnings. Although the company started to perform well financially in the latter part of the decade, investors have a new "can't miss" tech company: Apple.

Constant fears of the PC's decline, a protracted recession, and growth concerns drove Microsoft's market cap to $150 billion -- nearly 75% lower than its all-time high in 1999, although net income is 50% higher. Since then, Microsoft has continued its amazing run and has rebounded to a $350 billion company.

Final thoughts
While it is easy to blame a CEO for a company stuck in reverse, it isn't always right. Microsoft's "lost decade" can be thought of as almost a case study of fear and greed. And while he could be faulted for many things, Steve Ballmer did an admirable job running the company, all things considered. Irrational investors are more to blame for Microsoft's sluggish performance by bidding it up to stratospheric levels, not Steve Ballmer.