This was written by brothers and Fool co-founders David and Tom Gardner.

Twenty years ago today, on Aug. 4, 1994, The Motley Fool was born online. We'd started a year before as a print newsletter for friends and family. It was truly motley: lead essays about movies or sports backed up by several pages of stock picks at the end. Over the course of the year leading up to our debut on America Online, we spent increasing amounts of time online, participating in investor discussions on AOL and Prodigy (anyone remember Prodigy?). We found ourselves totally attracted to this new online medium where we could interact much more quickly and intelligently with a growing community of Fools. This growing community prompted the AOL Finance team of Rob Shenk and Katherine Borsecnik to invite us out to lunch, and plans for keyword FOOL were not just made, but in the months following enacted. 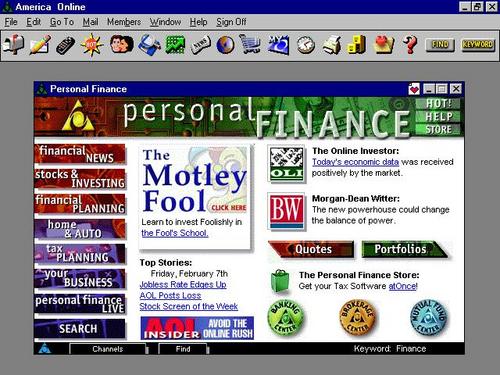 That first day, we started the "Fool Portfolio": $50,000 of our own real money to be invested in a totally transparent and educational way. Our aim was to demonstrate that we "mere" individual investors could and would beat the market over time. "You can too!" we said, both on our site and then increasingly through our Simon & Schuster books and the coast-to-coast Motley Fool Radio Show, where some of you first found us. The notion that you could beat the market with confidence was a radical proposal at the time. To many still getting (improper) teaching today, it may still seem radical. But from the earliest days of the portfolio, with stocks we picked based on great ideas and information coming in from a growing network of Fools nationwide, beat the market we did.

Our first stock picks were AOL and some Dow dividend heavyweights, and from there we went on over the years to buy some great long-term winners like Amazon, Amgen, eBay, and Starbucks, some non-long-term winners like Iomega and Celera (amazing but not sustainable), and some downright bad stocks like Excite@Home and 3Dfx. As the stock market hit crazy highs in early 2000, that $50,000 touched a high of just about $1,000,000 for an overall return of 20 times our money. Then everything started falling.

The market came down, the Internet reversed from growth to decline, and our business model -- free ad-supported market advice -- came down with 'em. With the Nasdaq (and all our stocks, too) more than cut in half, it wasn't exactly an easy move to shift our business in 2002-03 from free to premium advice. But we had to, so we chose to close down our beloved "FoolPort," by then known as the "Rule Breaker Portfolio" (and including a talent-laden team headlined by Jeff Fischer), in order to restart again with the new services for which people would actually pay. (They're the services you know today, starting with Motley Fool Stock Advisor.)

And so that portfolio into which we poured our capital and our blood, sweat, and tears -- which started exactly 20 years ago today and was in a sense the first prominent effort on the Internet to provide accountable, winning stock market advice -- closed, in March 2003. Even though it was down two-thirds from its highs, the annualized return from 1994-2003 was 20.16% vs. 9.07% for the S&P 500 with dividends added.

The FoolPort had some cool innovations. In the most un-Wall-Street-like way, we announced every pick we made ahead of time, allowing our viewers to "front run" us if they wanted to; we didn't buy until at least 24 hours later. We were trying to disrupt the financial world and its tendency to take action first and let the public know later. We're still doing that, with services like Motley Fool One and Supernova always giving members a full day first to pick up any new recommendation we make and will later act on. We also supported every stock with its own discussion board; we know, no big deal today. But back then all kinds of skepticism were   heaped on "chatter" in "chat rooms" in "cyberspace" and The Motley Fool was made to sound like we were stretching the outer limits of the investment galaxy with this bleeding edge commitment to community intelligence. 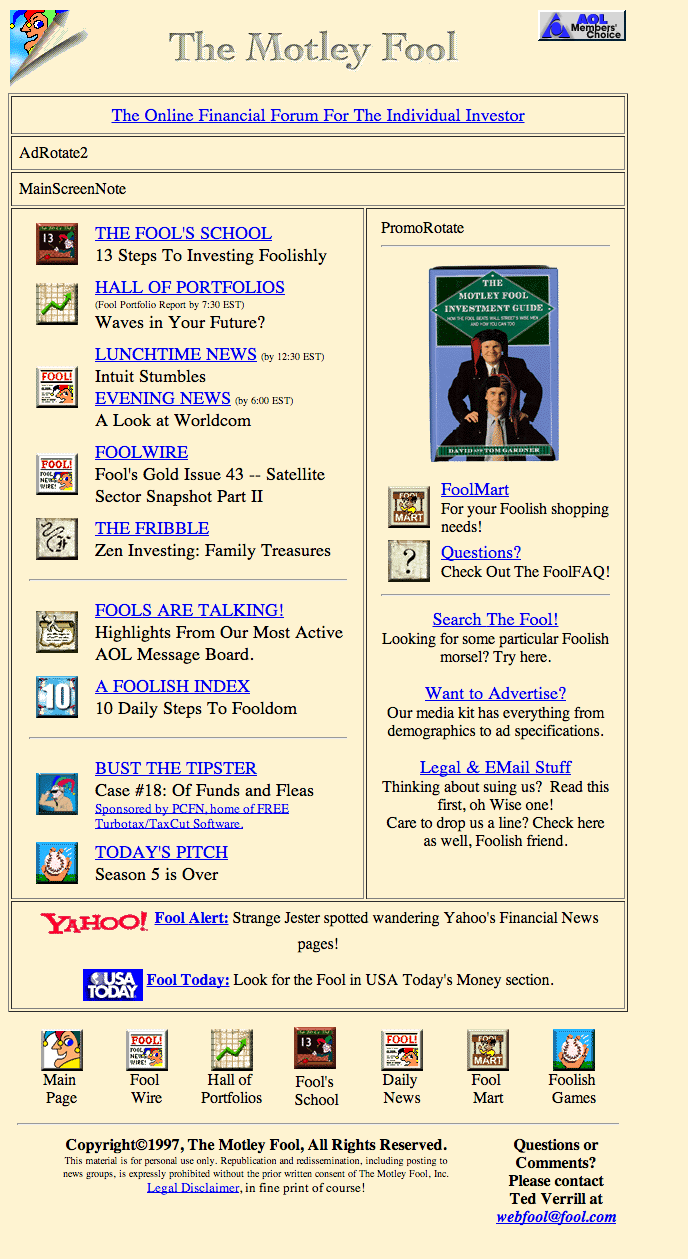 In celebration of this special day 20 years ago, our investment team (thank you, Yervand Khoranian) went back and took the portfolio as it stood in March 2003 and carried the positions right through forward, to today. The question is: Had you just bought and held that portfolio beyond its close on Fool.com and stayed invested till today, how would you be doing?

The results are below, and speak for themselves to the power of Foolish investing:

Thank you to all our 1994-2003 early Fools who helped create from the outset the world's greatest investment community. To the next 20 years, Fool on!

Put on some Pearl Jam and relive the '90s! Here's the Fool Port's past in full Foolish display: