Please ensure Javascript is enabled for purposes of website accessibility
Log In Help Join The Motley Fool
Free Article Join Over 1 Million Premium Members And Get More In-Depth Stock Guidance and Research
By Lee Samaha - Aug 4, 2014 at 11:30AM

Why, and how, airlines in North America are set for levels of profitability they haven't seen in years, and what it means to Boeing.

According to the most recent industry data, airlines in North America are set to have a highly profitable year in 2014. In fact, the trend appears to be strengthening. This is good news for full-service airlines such as American Airlines (AAL -2.19%) and Delta Air Lines (DAL -1.43%), and also for budget carriers such as Southwest Airlines (LUV -1.38%) and JetBlue (JBLU 1.39%). It's also good news for passengers, as airlines tend to upgrade their fleets when the going is good. So, what is the evidence that North American airlines are doing better, and what does it mean for The Boeing Company (BA -2.41%)?

A Delta Boeing 757 taxies prior to takeoff.

North American airlines set for a great year
The International Air Transport Association, or IATA, is the single most important trade association in the airline industry. Its biannual "Airline Industry Economic Performance" report outlines various forecasts for the airline industry. I've selected some data from previous IATA forecasts to demonstrate how the outlook is strengthening for North American airlines.

First, let's look at how the outlook for airline profitability in 2013 changed as the year progressed. To read this chart properly, consider that in September 2012, the IATA forecasted that full-year 2013 airline profitability in North America would be $2.9 billion. Fast-forward to last December, and the forecast has doubled to $5.8 billion. Also note that Europe's outlook went from a negative to a healthy plus, but the Asia-Pacific region declined. 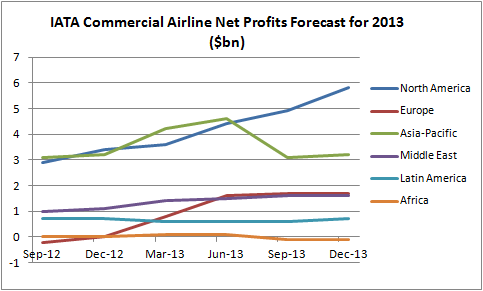 Furthermore, the positive trend, at least for North America, has continued this year. The following chart outlines IATA forecasts for all of 2014. 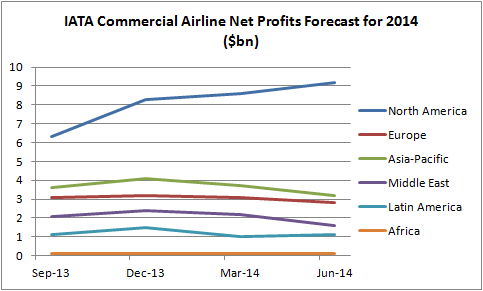 It's clear that the outlook for North American airlines is strengthening.

Why North American airlines are outperforming, and what it means for Boeing
There are three factors to consider here, and the first two are somewhat connected. First, jet fuel costs have been held down, partly as a consequence of U.S. oil production increases resulting from investment in shale oil. Second, airlines are running increasingly fuel-efficient aircraft. A combination of lower fuel costs and higher revenue means North American airlines are becoming more profitable.

Note in the following chart how airline fuel costs have fallen in the past two years, and how fuel consumption is significantly lower than it was from 2000 to 2008. 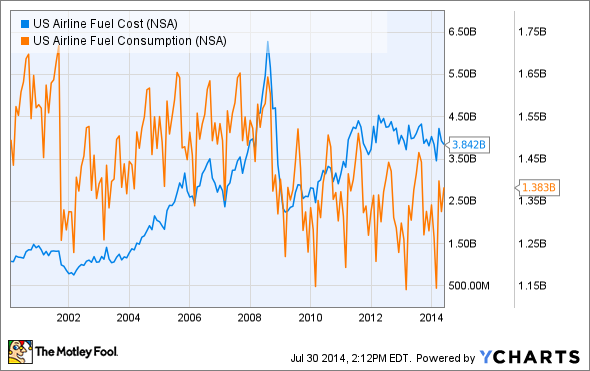 The third reason is that major North American airlines have held back on adding significantly more flights. Capacity growth allows for more passengers, but can put downward pressure on ticket prices. 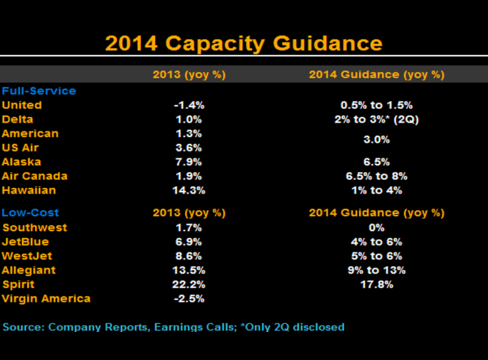 But that doesn't mean Boeing can't make money. On the contrary, full-service airlines, which aren't adding new capacity at the same rate as low-cost airlines -- are due to receive delivery of more narrow-body aircraft than low-cost airlines are in 2014. Note the fifth column in the following Bloomberg chart. Full-service airlines need to spend to replace their fleets and take advantage of new fuel-efficient airplanes from Boeing and Airbus. 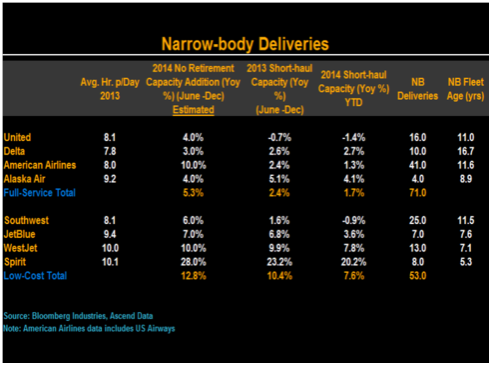 Finally, the historical data suggests that when the airline industry increases profits, Boeing increases its order book. So, look out for a strong order book from Boeing in 2014. 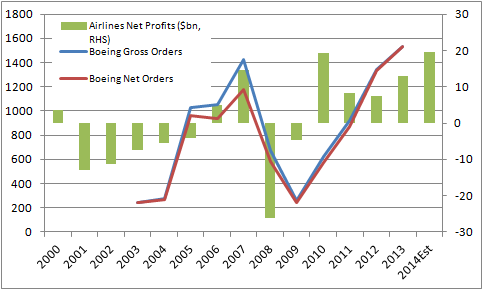 The bottom line
All told, North American airlines look set for a great 2014, and conditions appear to be trending in a positive direction. A combination of lower fuel costs, more efficient aircraft, capacity restraints, and good end demand is helping American carriers move toward an exceptional year. Good news for the airlines, and good news for Boeing.