You are your own worst enemy.

I flew from San Francisco to Washington, D.C. this weekend. Sitting next to me was a woman, probably about 30 years old, who shook so much during takeoff that her knee hit mine several times. She did the same thing in the middle of the flight when we hit a little turbulence. She whispered "Thank God" as we landed.

She was clearly terrified of flying. But when we arrived in Washington, she walked to the curb, got in a car, and drove off.

This reminded me of a section from Gerd Gigerenzer's book Risk Savvy:

How many miles would you have to drive by car until the risk of dying is the same as in a nonstop flight? I have asked this to dozens of expert audiences. The answers are all over the place: one thousand miles, ten thousand miles, driving three times around the world. However, the best estimate is twelve miles. Yes, only twelve. If your car makes it safely to the airport, the most dangerous part of your trip is likely already behind you.

This has been a deadly year for air travel, with more than 700 fatalities in the last four months. But more than 700 people die in auto accidents every five hours.

Ebola has also been in the news this week, scaring people around the world. Ebola has killed 1,590 people since it was identified in the 1970s, according to the World Health Organization. Measles -- which faces a vaccination backlash -- kills about as many people every 96 hours.

The craziest thing about risk is that people fear what's rare and unknown much more than they fear things that are common but deadly.

People aren't stupid. The problem is that our educational system has an amazing blind spot concerning risk literacy. We teach our children the mathematics of certainty -- geometry and trigonometry -- but not the mathematics of uncertainty, statistical thinking. And we teach our children biology but not the psychology that shapes their fears and desires. Even experts, shockingly, are not trained how to communicate risks to the public in an understandable way. And there can be positive interest in scaring people: to get an article on the front page, to persuade people to relinquish civil rights, or to sell a product. All these outside causes contribute to the problem.

Several other causes contribute to the problem of what I'd call scaring yourself stupid.

Storytelling. Every teenager can tell you the story of the Titanic. But many educated adults have never heard of the 1987 sinking of the ferry MV Dona Paz, which killed almost three times as many people, a quarter of them children.

Some tragedies become famous because they made good stories independent of their actual damage. The result is that certain things we're most scared of aren't that big a deal, while things we're oblivious to can be major risks.

Gullibility during times of fear. People are more likely to believe lies, misconceptions, and fairy tales when they're scared or facing an uncertain outcome. In his 1841 book Extraordinary Popular Delusions and the Madness of Crowds, Charles Mackay wrote:

During the Great Plague of London, in 1665, the people listened with avidity to the predictions of quacks and fanatics. Defoe says that at that time the people were more addicted to prophecies and astronomical conjurations, dreams, and old wives' tales than ever they were before or since.

This helps explain why so many investors became end-of-the-world goldbugs in 2008. Uncertainty makes you believe things you would have ignored under a more rational state of mind.

Culture. Germans and Austrians are generally terrified of nuclear power and radiation. Most of Europe has banned X-ray scanners at airports over cancer fears. Austria built one nuclear power plant in the 1970s, but voters shut it down before it ever operated.

Americans and the French, on the other hand, could not care less. The French embraced nuclear power long ago, and Americans X-ray and CT scan with abandon.

Some things may seem risky or harmless not because you've evaluated the facts, but because you were born into a culture that told you a story one way or the other.

The unfamiliar. Mapmakers once wrote "Here be dragons" over unexplored areas. The unfamiliar is viewed as risky even if you have no evidence that it is.

If hundreds of thousands of people die from heart disease every year, the risk might actually seem diminished, because you become desensitized to its regularity. But if one person dies from Ebola, it is front-page news, only because it's rare. People would rather do something very risky but common (eat a poor diet) than something trivially dangerous but less common (flying). 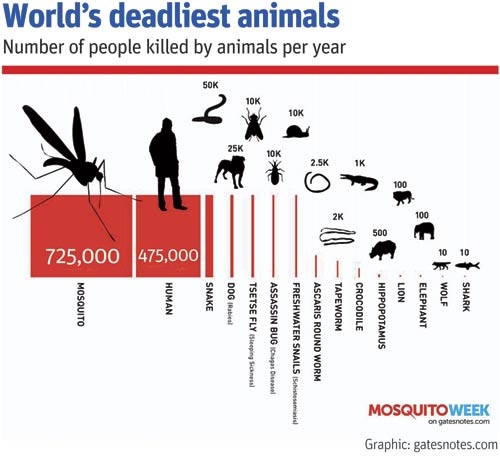 Nobel Prize-winning psychologist Daniel Kahneman once explained a version of this flaw: "A reliable way to make people believe in falsehoods is frequent repetition, because familiarity is not easily distinguished from truth. Authoritarian institutions and marketers have always known this fact."

Statistical blindness. Gigerenzer writes about a farmer asking a veterinarian about surgery risk to one of his cows:

Ben, the owner of the farm, asked how likely the cow was to have problems after the surgery. Trying to put it in terms that he could relate to I said, "If we did this procedure on 100 cows, I expect about 10 to 15 would not completely recover within a few weeks of surgery." He paused a moment and said, "Well that's good because I only have 35 cows."

We generally just suck at math.

Americans were widely worried about growing government spending in 2009. After the federal government passed a $3.5 trillion annual budget to mass protests, a group of economists asked 1,000 Americans a simple question: "How many millions are in a trillion?" Only 21% answered correctly. The rest either didn't know or answered wrong. Most Americans were worried about spending $3.5 trillion, but most had no idea how much a trillion actually was.

Financial adviser Carl Richards says "risk is what's left over when you think you've thought of everything." Wherever you're not looking, or not thinking, that's where it is.