Yet another tainted meat scandal threatens to damage U.S. food operators beyond repair

Caught up once more in a tainted-meat scandal in China, Yum! Brands (YUM -0.70%) may suffer more consequences than just having its feathers ruffled. It could be the start of a prolonged slide in its operations and a secular decline in its stock's value. It's not alone in this crisis, as both McDonald's and Burger King were swept along by it, too, as were other eateries including Starbucks and pizzeria Papa John's.

Yum!, though, having been there once before, and still operating on shaky legs from trying to regain its financial footing in a region that accounts for more than half its revenues and 40% of its operating profits, has seen its sales -- and perhaps worse for its long-term prospects, its reputation -- substantially damaged by the fallout, and investors are right to wonder how well it can recover.

An undercover report by Chinese media in late July revealed Shanghai Husi Food, a division of U.S.-based OSI Group, and a major supplier to U.S. fast-food restaurants in Asia, was found to be mixing fresh meat with meat that had gone past its expiration date at levels apparently beyond the Chinese company's acceptable limits. The resulting shockwave was immediate and severe: Yum! reported that the scandal shook consumer confidence in its brands, causing a "significant negative impact" to its same-store sales at both its KFC and Pizza Hut chains..

McDonald's also said in an SEC filing that the effects rippled across the region, with restaurants in China, Japan, and elsewhere suffering "a significant negative impact to results." Guidance that the company had only just given on achieving comps that were expected to be relatively flat could no longer be trusted.

So far, Burger King and Starbucks haven't issued operational updates, and though they and Papa John's have all reportedly cut ties to the supplier, it's doubtful anyone can hope for better results.

Yum!, not surprisingly, was one of the first to immediately sever its relationship with the supplier, having suffered through a year-long slog of falling sales from a separate tainted-meat scandal. Same-store sales plunged 36% at one point at its Chinese KFC restaurants, and they were only just recovering. Last quarter, comps jumped 15%, leading to a 21% surge in revenues.

Still, Yum! was skating on thin ice as it was, and now all of its efforts at salvaging its reputation seem to have been for naught, a situation the fast-food chain recognizes as it says it's reserving all its legal options till after China's regulatory agencies conclude their investigation.

McDonald's is likely to be similarly damaged, as its Asia-Pacific, Middle East, and Africa segment accounts for around 25% of its revenues, and Starbucks has been pushing to have China become its largest market outside of the U.S. Papa John's says its company-owned stores in China represent more than a quarter of its international revenues, and Burger King has cited 15% of its restaurants in China as of the end of last year.

While it's clear all of the companies will feel the scandal's effects, it's Yum! Brands that will be skewered the worst. 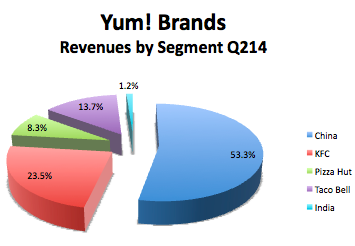 Yum! was expecting per-share earnings growth to exceed 20% in 2014 primarily because it anticipated China's operating profits would be above the ongoing growth rate of 15% this year.

Equally worrisome is the fact that mixing expired and fresh meat together was apparently tacitly approved by Husi Foods, and according to state-run media reports, there was even a manual detailing the appropriate ratios to use. Lack of trust among local processors runs rampant with consumers, who've turned to international brands for quality, and Tyson Foods has gone so far as to build out a whole chicken farm operation in China to keep close tabs on food quality throughout its entire supply chain, since plant inspections there often amount to little more than honor systems.

Of course the more immediate concern is that U.S. fast-food operators will see their Chinese operations damaged, and Yum! Brand's reputation may be beyond repair for far longer. Those companies that built up their businesses and profits by international expansion may now need to come with a "Made in China" warning label.