The media often depicts big oil companies such as ExxonMobil in a highly negative light -- awash in profits taken from consumers who suffer under the thrall of high gas prices. That's understandable given that 19 of the 25 highest annual profits ever recorded came from big oil companies; seven of those from Exxon, whose 2008 $45 billion annual profit is the largest in world history.

Furthermore, the media likes to quote the astronomical sales figures generated by these companies' scale. For example, ExxonMobil is the fourth largest oil company in the world, just behind the Saudi, Russian, and Iranian national oil companies.

This generates impressive sales figures as high as $500 billion in a single year. 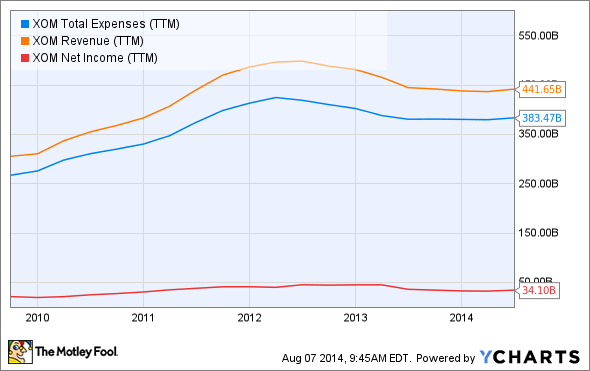 However, note Exxon's sky-high expenses and that its profit margin is actually just 7.7%. In fact, the average profit margin for the oil industry is just 5.2%,lower than other industries such as telecommunications (at 7.7%), banking (13.7%), or tech (17.1%).

The truth is that big oil companies are struggling to achieve growth in an age of climate change concerns, stricter environmental regulations, and exponentially rising costs. In this article I'd like to highlight two major growth challenges to big oil and why the industry's days of market-beating growth may be numbered.

Production growth slowing in an age of diminishing returns
The world may be awash in oil, with as much as 7 trillion to 10 trillion barrels left in the ground in the form of conventional deposits, tar sands, shale oil, and kerogen; however, the cost of getting those resources out of the ground is climbing fast. 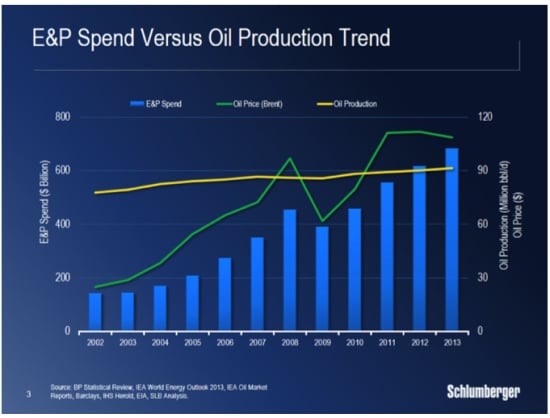 In the last 11 years, oil and gas exploration and production budgets have grown by 15% annually, a total of 400%, to $650 billion per year. Yet, over the last decade oil production is up only 15%.

One might think that shale oil, the cause of America's record energy boom, might be a solution to big oil's production growth woes, yet shale oil is only 5%-10% recoverable using standard technology. In fact, since 2004 the returns on investment for oil companies drilling for shale have declined by from 25%-30% to 10%-15%, owing to higher cost and first-year decline rates as high as 90%. 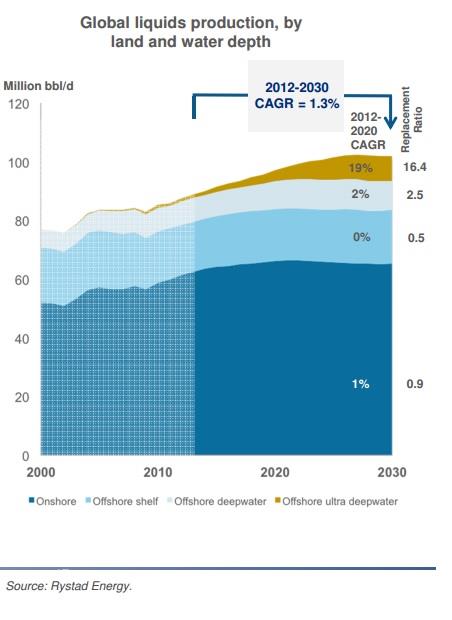 Once again the problem here is cost. To safely drill 40,000 feet under the ocean, in up to 12,000 feet of water, requires the latest technology. Seventh generation UDW drill ships cost around $638 million to construct and as much as $653,000/day to charter. In fact, ExxonMobil is set to pay offshore driller Seadrill $950 million over the next four years for the use of just one UDW drill ship.

There's also the fact that not all big oil projects work out. BP's Muckluck well, drilled into the North slope of Alaska, was a dry hole that cost over $1 billion to drill ($2.47 billion in today's money).

Law of large numbers catching up with big oil
A second major problem for big oil is its immense scale makes it hard for new projects to move the needle, in terms of production growth. For example, ExxonMobil is planning on spending $193.3 billion between 2013 and 2017 in capital expenditures to maintain production as well as on 24 new projects.

Yet despite that herculean effort, Exxon is forecasting flat 2014 production and just 4% annual growth in oil output between 2015 and 2017 (1% increase in gas).

Even when a project can be found to move the needle, costs can often soar out of control. For example, Chevron's Gorgon LNG (liquified natural gas) export project was supposed to cost $37 billion. That estimate has risen 46% to $54 billion and the project won't be complete until 2015.

According to Dr. Evans Gyasi, a researcher from the University of Warwick (UK), 80% of global oil and gas projects result in cost overruns -- by an average of 40%.

Solutions?
Big oil companies such ExxonMobil, Chevron, BP, and Royal Dutch Shell have nearly all trailed the market in the last five years. 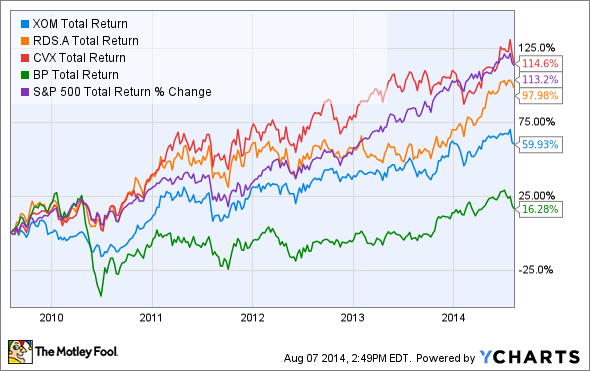 To help grow profits big oil is attempting to better control costs and invest smaller resources more efficiently. For example, Chevron has a plan to grow production by 20% over the next four years while keeping its capital expenditures constant. Similarly, Exxon's growth plans, mentioned earlier, actually represent a 13% decrease in annual spending for the company.

Another option for growing earnings per share is stock buybacks, which these four companies have been doing aggressively, to the tune of $27.4 billion over the last year alone.

Foolish takeaway
Big oil may have the biggest absolute profits in the world but in terms of profit margins and growth it's a brutal industry to be in. Slowing production growth and soaring costs are just two risk factors that threaten to bring the days of market-beating growth to an end unless cost control measures and stock buybacks can restore growth in earnings per share.