The $8.5 billion merger of Dollar Tree (NASDAQ:DLTR) and Family Dollar (NYSE:FDO.DL) remains on track, and odds are that leading deep-discount chain Dollar General (NYSE:DG) won't make a counteroffer -- despite continued speculation that it might do just that. The fact that the rumor persists suggests that some underlying value can still be found in these dollar store chains, but don't discount the risk that these stores may have already seen whatever growth they were going to achieve.

Dollar for dollar
The idea of combining Dollar General and Family Dollar always seemed to make a lot of sense, and was what billionaire investor Carl Icahn had in mind when he seized a large 9.4% stake in the latter, demanding it put itself up for sale. Despite the size the combined company would assume, there was little concern it would run afoul of antitrust regulators because the industry is so broad and fragmented. There was also little chance a "dollar" store would mark up prices so much that it could unfairly profit at the expense of its rivals.

But Dollar General passed on the opportunity and then announced its CEO would retire next year, all but assuring it wouldn't (or couldn't) make an offer. You don't change horses in midstream, and a merger is complicated enough without having to deal with a new executive trying to learn the ropes at the same time.

However, one reason behind the undying speculation that Dollar General might yet step up is that if it doesn't do so now, the combined Dollar Tree-Family Dollar would be too large to be bought up later.

The deal will create the largest dollar store chain, with more than 13,000 stores in 48 states and annual revenue in excess of $18 billion. That will put it ahead of Dollar General, which operates some 11,300 stores in 40 states and collected revenue of $4.5 billion last year.

Pennies on the dollar
Even if the General doesn't make a bid, there's still a growth story in dollar chains. Wal-Mart (NYSE:WMT) has recognized this value and accelerated plans to roll out additional smaller-format stores that can more effectively compete against the dollar chains. The retail giant has always been the lurking threat to the fragmented market, and is also seen as a potential bidder for Family Dollar. Wal-Mart could leapfrog its efforts to expand its Neighborhood Market stores into more areas.

The megaretailer hasn't made any such indication it wants to acquire Family Dollar, but Wal-Mart has lost share in recent years to the dollar chains. If it sees a larger Dollar Tree as a continued threat, an even better option might be making a play for Dollar General, which is the industry leader and in better shape operationally than Family Dollar. Wal-Mart could hit the ground running by scooping up the General without having to fix a broken environment.

Break the buck
This further underscores why industry growth persists no matter who buys whom. Icahn saw Family Dollar as broken, saying that it "consistently underperformed its peers on most, if not all, operating metrics," including revenue growth, same-store sales growth, sales per store, sales per square foot, and more. While Dollar Tree imposing a better management structure on Family Dollar should improve the situation, that does not happen overnight. And that needs to occur at a time when the economy, though still in a funk, slowly improves and expands.

Consumers went down-market during the recession, accounting for the growth the dollar stores enjoyed (and why Icahn excoriated Family Dollar's management for failing to capitalize on it). Shoppers will only stay there for so long, though, before they want to start upscaling again. 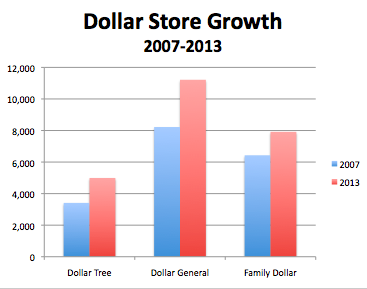 Since the recession, the big three deep discounters have grown their store counts from 18,000 across the country to more than 24,000 locations. Wal-Mart recognized the opportunity and is responding to it by opening up more new smaller stores than large supercenters, and other mass retailers have taken notice as well. During this time Target opened its small-format CityTarget and recently went even smaller with a prototype TargetExpress concept store.

Additionally, the convenience store has become a popular destination for consumers looking for, well, convenience and a quick-trip opportunity. These retailers have also bulked up their offerings and are becoming a growth market in their own right.

Penny for your thoughts
I don't think the dollar store concept is played out by any means yet, and a newly enlarged Dollar Tree going head-to-head with Dollar General will provide competitive benefits to consumers. Yet the stores may soon reach a saturation point that size alone might not be able to breach.