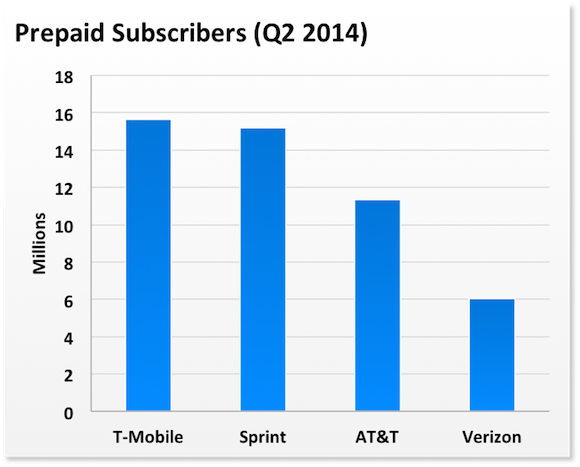 It's only been a matter of days since Sprint (NYSE:S) reportedly abandoned its efforts to acquire T-Mobile (NASDAQ:TMUS). Still, that isn't stopping T-Mobile CEO John Legere from jabbing at his company's larger rivals -- and former suitors.

T-Mobile notes that the prepaid mobile market is becoming increasingly important. It's true that postpaid subscribers tend to pay more each month on average, but it's also true that there are more subscriber growth opportunities right now in the prepaid segment, since carriers have been focusing so heavily on the postpaid segment for years.

Acquiring prepaid growth
AT&T's (NYSE:T) acquisition of Leap Wireless and its Cricket brand was partially intended to grow its position in the prepaid market (with the other and more important part being spectrum). AT&T subsequently shuttered its freshly launched Aio Wireless prepaid brand -- which no one had ever heard of -- and consolidated its dozens of subscribers under the Cricket umbrella.

It's worth acknowledging that T-Mobile's strong position in the prepaid market is largely thanks to its 2013 merger with MetroPCS. MetroPCS had long catered to the prepaid crowd, and T-Mobile added 8.9 million prepaid customers as a result of the acquisition, which closed in April of last year. That's well over half of its current prepaid subscriber base.

That call might not even be all that bold. T-Mobile could very easily overtake Sprint to become the No. 3 carrier in the U.S. when you consider each carrier's current trajectory -- the company is catching up fast. 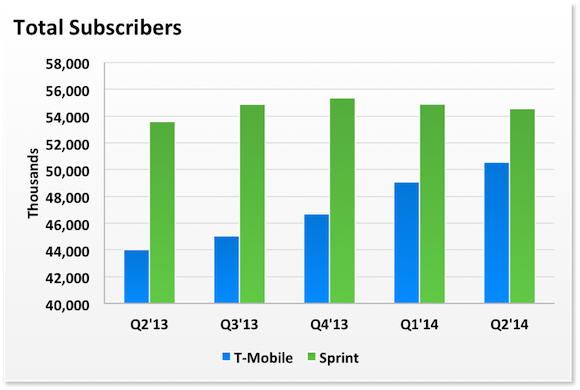 Sprint is entering a time of uncertainty, as is usually the case when a company replaces its CEO. It's entirely possible that incoming CEO Marcelo Claure will spearhead a successful strategy to grow Sprint's customer base, but it's also possible that he won't. The point is that there is risk associated with C-suite management changes, and the transition comes at a time when T-Mobile is crushing it on all fronts.

Are we there yet?
T-Mobile has been on quite a journey in recent years, but its turnaround is well under way. The failed AT&T acquisition in 2011 helped bolster T-Mobile's cash and spectrum positions in a big way, which ended up enabling T-Mobile to finally score Apple's iPhone. That filled a major hole in its phone lineup. Verizon also swapped some spectrum with T-Mobile to appease regulators, who were scrutinizing a separate spectrum transaction that Big Red was looking to complete.

All the while, John Legere has become the very public face for T-Mobile, aggressively marketing (and cursing) his way to glory.

T-Mobile spent years bleeding customers to larger rivals, but now it's become the fastest growing carrier in the U.S. The Un-carrier has added over 1 million net new customers per quarter for the past five quarters.