The quiet Dublin street seen here is actually a bustling avenue of American business. At least 10 U.S. corporations have incorporated themselves in Dublin with official addresses on or very near Fitzwilliam Place. I'm talking about drug manufacturers, insurance companies, and even tech giants basing their tax bills on Irish law while running their businesses from American soil. By doing so, they're giving their tax bills a massive haircut and boosting their bottom-line profits by millions of dollars every quarter.

The strategy is known as a tax inversion, and it's a hot topic right now. If you're looking for an indication of just how inflamed the discussion is, both Jon Stewart and Stephen Colbert have made fun of the strategy recently. That's a big stage for a pretty obscure business strategy.

The tax-efficient strategy involves an American company buying a smaller business headquartered somewhere like Ireland or the Netherlands, where corporate tax rates are lower. The smaller and more tax-efficient subsidiary then takes official control of the larger business, moving the nexus for tax calculations abroad. At least six such deals currently are under way -- and I'm just counting companies large enough to rank on the S&P 500 index.

How big a difference can these tax moves make to a company's bottom line? Let's look at some historical examples.

One of the most recent tax inversion transactions occurred in 2012, when industrial titan Eaton (NYSE:ETN) moved its taxable base of operations from Beachwood, Ohio, to Dublin, Ireland.

Eaton bought its Dublin-based rival in electrical supplies, Cooper Industries, for $11.5 billion in cash and shares. Technically, the buyout created a new holding company with headquarters in Dublin. The stock still trades on the New York Stock Exchange, and all official filings are stamped with the Dublin address. This new entity immediately shouldered official control of the entire businesses of Eaton and Cooper, but the operational headquarters never left Ohio. Even the former Cooper operations have contact addresses and phone numbers in Ohio and Texas -- not Dublin.

So Eaton most definitely pulled a tax inversion. Did it make a difference? I'd say so.

In 2011, which was Eaton's last full fiscal year before closing the Cooper deal, the company set aside $201 million for income taxes on pre-tax income of $1.55 billion. That works out to an effective tax rate of 12.9%. It's a far cry from the official 35% American corporate tax rate, thanks to a bevy of deductions and tax credits.

But moving to Ireland kept the tax man even further away. In 2013, Eaton only earmarked $11 million for tax payments on $1.88 billion in pre-tax earnings.

Bottom-line earnings arguably gained from the newfound tax efficiency -- something like $230 million. 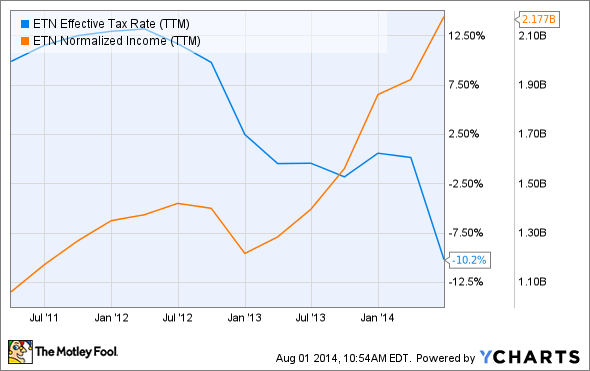 One could also look at an industry with only two serious competitors, in which one took the lower tax rates abroad and the other stayed incorporated in America.

I'm thinking about computer hard drives. After a bevy of buyouts, the names to consider in this space are Western Digital (NASDAQ:WDC) and Seagate Technology (NASDAQ:STX).

Both companies have their operational headquarters in California. Seagate hangs out in Cupertino, at the heart of Silicon Valley. Western Digital's officers prefer the even sunnier skies in Irvine, on the south side of Los Angeles.

Like many American corporations, Western Digital is officially incorporated in the business-friendly district we know as Delaware. The company claims 78% of its sales outside American borders, putting much of its income in tax-friendlier markets. Like all tech companies, Western Digital also enjoys an even larger number of innovation-based tax credits than Eaton ever did. Its effective tax rate was a measly 7.7% in the 2014 fiscal year, reported last week.

The Cupertino-based company has bounced around various tax-efficient incorporation sites over the last decade, with a long stint in the zero-tax Cayman Islands. But regulations changed in the Caribbean paradise, and Seagate found a new reportable home in -- yup -- Dublin, Ireland. Seagate's Dublin address is a comfy five-minute walk away from Eaton's taxable center.

In the just-reported 2014 fiscal year, Seagate rode its Irish connection to a net tax credit of $14 million on $1.56 billion in global sales. That's the net result of Ireland's low 12.5% corporate tax rate, along with Seagate's arsenal of tax credits and deductions.

Seagate's negative effective tax rate is not a fluke, but rather a sustainable trend. Try as it might, Western Digital can match its rival's tax efficiency only in extreme cases, such as when Seagate took a one-time tax hit in 2011 for its move across the Atlantic. 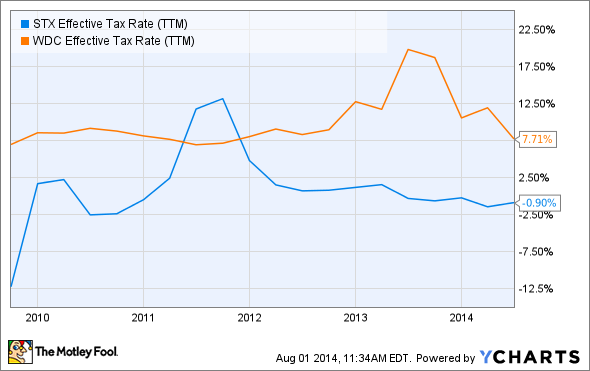 That's why Chiquita Brands International (NYSE: CQB) wants to move to Ireland. The fruits and vegetables distributor currently labors under a 41% effective tax rate, so it could use the Emerald Isle's lower base tax.

Walgreen (NASDAQ:WBA) is heading to Switzerland for much the same reason. The Swiss corporate tax rate has fallen from 21.3% to 17.9% over the last eight years, while the convenience retailer sends 37% of its pre-tax earnings to Uncle Sam these days.

Then again, 100% of Walgreen's sales come from its all-American store chain. The company holds a 45% interest in a much smaller U.K. and Latin American drugstore chain called Alliance Boots, but the income from that foreign adventure amounts to a rounding error on the income statement.

Buying out the rest of Alliance Boots would place as much as 25% of Walgreen's sales outside American borders, opening the door to a much bigger global market. And Alliance Boots just happens to have its headquarters in Bern, Switzerland. Completing this partial buyout could be the ticket to much smaller tax bills.

The Foolish (tax) takeaway
Tax inversion moves can put a big dent in corporate tax bills, providing a large boost to after-tax earnings. If Western Digital could reduce its income tax to zero, it would have added $0.11 per share to its fourth-quarter earnings -- a quick 9% improvement.

Are these businesses simply fulfilling their duty to shareholders, or are they stealing tax dollars from the American government? That's an ethical quandary for you to ponder. For some, the tax-reduction strategy makes Seagate a better investment than Western Digital. For others, Eaton and Walgreen become "sin stocks," balancing the bottom-line benefits against patriotic scruples.

But there is no question whatsoever that tax inversions can boost bottom-line earnings. Even Stephen Colbert and Jon Stewart would agree, while gleefully ripping into the moral structure behind the strategy.