Users aren't so happy about having to download a separate Facebook Messenger app. Despite the criticism, unbundling apps is still the right strategy in the long run. 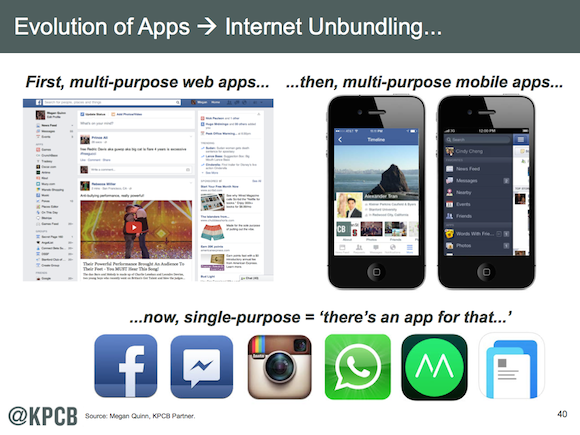 There is a broad trend unfolding with the evolution of app design, one that favors single-purpose stand-alone apps. Single-purpose apps are better suited for mobile use since they offer a faster and more efficient way to accomplish specific tasks. No one wants to spend extra time digging around in a multipurpose app to find what they're looking for.

As Facebook (META -0.42%) CEO Mark Zuckerberg told The New York Times in April, "In mobile there's a big premium on creating single-purpose first-class experiences." In no uncertain terms, Zuckerberg laid out a strategy for "unbundling the big blue app" into distinct single-purpose apps. That's why it shouldn't have been much of a surprise when the company said last month that it would force users to download a separate Messenger app, unbundling that functionality from the core Facebook app.

On the last earnings conference call, Facebook noted that users send over 12 billion messages per day on Facebook, and that Messenger has now reached 200 million monthly active users, or MAUs. That doesn't include the over 500 million MAUs for recent Facebook acquisition WhatsApp. Facebook has added numerous functions to Messenger, including voice calls and group chats. The app has now risen to the No. 1 free spot in Apple's App Store charts.

There are two recurring themes among the app's critics: People are uncomfortable with some of the permissions that the app requests, and they absolutely hate the fact that they're forced to download it in the first place.

Some of the fear regarding permissions is misplaced, though. For instance, in order to make voice calls or video chats you naturally must grant the app access to your device's microphone. Yet some fear Facebook is indiscriminately eavesdropping. Facebook explains exactly why it needs these permissions, but National Security Agency-invoked privacy fears are still at the top of everyone's minds these days.

Facebook is taking Messenger very seriously as part of its broader messaging strategy, which is why the company just poached David Marcus from eBay's PayPal division to run Messenger. Zuckerberg even hinted that eventually Messenger would have some type of overlap with Facebook's payments business, which makes perfect sense given Marcus' background.

The $19 billion price tag for WhatsApp is further evidence of just how important messaging is to Facebook's global ambitions. Facebook will operate two distinct brands and services, and Messenger and WhatsApp cover different bases. WhatsApp is more popular in emerging markets as a true SMS replacement, while Messenger is a cross-platform service that offers different usage models.

Facebook will also compete with other tech titans. Apple continues to build out iMessage and will begin syncing SMS messages to Macs in OS X Yosemite. Google also recently consolidated all of its disparate messaging services under Hangouts. None of these companies have monetization strategies in place for messaging services, but the WhatsApp deal still shows there's quite a premium just for users.

Is unbundling a mistake?

Despite user backlash about Facebook's unbundling, this trend isn't going to disappear anytime soon. Facebook says users can receive messages 20% faster by using the Messenger app, as opposed to the core Facebook app. Even LinkedIn is following in Facebook's footsteps, launching a single-purpose Job Search app earlier this summer.

There will always be skeptics to changes in the status quo, particularly when that involves shifting away from familiar usage models. That doesn't mean the strategy is inherently incorrect. While I may have initially doubted Zuckerberg's status as a visionary leader, the young CEO has proven he is exactly that. Despite the backlash, unbundling is the right way to go for a mobile company like Facebook.

1 Semiconductor Stock That Should Be on Your Radar