When Pioneer Natural Resources (NYSE:PXD) reported its second quarter results on August 4, investors initially sold off the stock. That's surprising in more ways than one. The company reported adjusted second quarter earnings of $195 million, or $1.35 per share, which actually beat analysts' estimates of $1.28 per share. Further, the company narrowed its 2014 production growth guidance range from 14%-19% to 16%-19%.

The only notable miss was on the revenue side, where the company fell about $10 million short of what analysts expected to see this quarter. The revenue miss, however, is pretty meaningless for an oil and gas company. So, if anything, investors simply sold off what is viewed by analysts as a richly valued stock as market troubles on the day the company released earnings exacerbated any existing negativity on the revenue miss -- sending Pioneer Natural Resources stock down by more than 5%.

However, beyond the headline numbers there was one important number buried within Pioneer Natural Resources' earnings report that investors cannot afford to miss. With each passing quarter the company becomes stronger in its belief that it is sitting on 10 billion barrels of recoverable oil and gas in its position in the Permian Basin. That is a huge step up from the 845 million barrels of oil equivalent, or BOE, of proved oil and gas reserves the company held at the end of last year. The company is basing its recoverable resource number on the estimated ultimate recovery, or EUR, it has been seeing from the horizontal wells it is drilling in the Permian Basin.

What is EUR and why does it matter?

The estimated ultimate recovery, or EUR, of an oil and gas well is the amount of oil and gas an energy company like Pioneer Natural Resources expects to extract over the lifetime of a well. It's a critical number in determining the return a company will earn when it drills a well. Because of this, the higher the EUR, the better the well.

In Pioneer Natural Resources' case, the company reported that its EURs in the Permian Basin continue to average 1 million BOE in the Wolfcamp B zone. That's a lot of oil and gas. In fact, it is well above what companies in the Bakken Shale and Eagle Ford Shale are seeing these days. For example, the average EUR of Continental Resources' (NYSE:CLR) oil wells in the Bakken Shale is just 603,000 BOE. Meanwhile, Devon Energy's (NYSE:DVN) top wells targeting the Eagle Ford shale in DeWitt County and Lavaca Texas see EURs of 850,000-950,000 BOE and 400,000-500,000 BOE, respectively.

Pioneer Natural Resources' position in the Permian Basin, however, consists of more than just the Wolfcamp B zone. The company is also experiencing strong well results from the Wolfcamp A and D zones, as well as the Lower Spraberry Shale. As the following slide notes, the EURs from these zones are ranging from as low as 650,000 BOE to well over 1 million BOE. 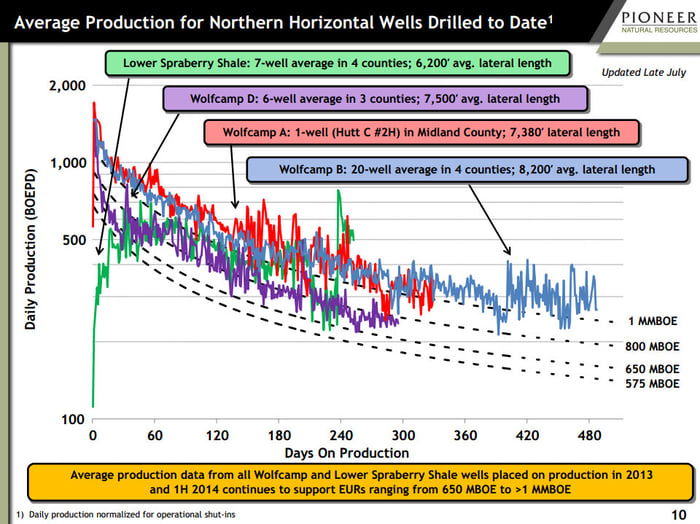 In addition to that, Pioneer Natural Resources is also appraising results from the Middle Spraberry Shale and Jo Mill intervals. While the results of both intervals have been mixed, the company is seeing its best wells produce really strong EURs. In the Jo Mill the two best wells look to produce an EUR of 800,000 BOE, while the best Middle Spraberry Shale well looks like it's on pace to produce 700,000 BOE, as noted in the following side. 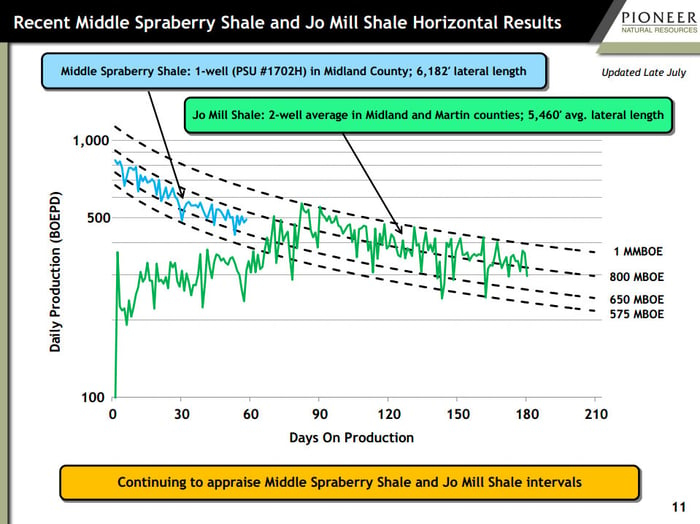 Because of these high EURs, as well as the fact that several layers of energy-rich shale plays are stacked on top of each other, many companies are suggesting that the Permian Basin could become the best shale play in the country.

Lots and lots of growth ahead for investors
Because of continued strong well results Pioneer Natural Resources remains on pace to more than double its 2013 production by 2018. Further, the company believes that its current position in the Permian Basin offers more than a decade's worth of growth as it works to unlock the more than 10 billion barrels of oil and gas underneath its vast acreage position. The company's second quarter earnings release highlighted the fact that the EURs from Pioneer Natural Resources' wells continue to be on pace to produce lots and lots of oil. Needless to say, because of this, the long-term growth story remains very well intact.