What you need to know about investing in silver.

Mankind has been mining silver for more than 5,000 years. It is believed to have first been mined in what is now Turkey. Through the centuries it became an important trading component especially along the Asian spice routes. Today, silver is not only important for the value it holds but for the vast array of usages derived from its versatility.

What is silver and why is it important?

Silver is a soft and shiny metal that has the highest electrical and thermal conductivity of all the metals, as well as being the most reflective.

Because of its physical properties silver has a range of industrial usages. It's used to make coils, solar panels, water filtrations, electrical contacts and conductors, specialize mirrors, window coatings as well as being used in photographic film and X-rays. In 2012 44% of the world's silver supplies were used in industrial application while another 5% was used for photography. In addition to those uses silver's natural beauty is why it is used to make jewelry, ornaments as well as high-value tableware and utensils, hence the name silverware. Jewelry making consumed 17% of the silver supply in 2012 while 4% of the silver supply was used to make silverware.

On top of that silver has value as a precious metal. As an investment it's found in coins or bullion bars as a storage of value. In 2012 nearly 9% of the silver supply was used to make coins and metals while investors scooped up 15% of supply as it was turned into physical bars to store wealth and act as an inflation hedge.

What is the history of silver?

Silver was an important metal to the ancients. Greece mined silver and used it to grow its empire. Later the Romans mined it and used to for trade. But silver really took off in 1492 when the New World was discovered as it was loaded with the precious metal. The Spanish found more silver in the Americas than they could have ever imagined. Between 1500 and 1800, Bolivia, Peru, and Mexico accounted for 85% of the world's silver production and trade.

Since then new silver discoveries have been made around the world along with new uses for the versatile metal. Currently Mexico leads the world in silver production as it produced 169.7 million ounces of it in 2013. It was followed by Peru, China, Australia, and Russia.

Silver's price is largely a result of supply and demand because more than half of the world's silver supplies are either for industrial uses or for other practical purposes. But because it is a tangible asset and recognized as a store of value its price can be affected by other factors such as inflation, currencies, interest rates, and global economic fears. This has caused its price to have notable peaks as investor demand has pushed its price higher at times of fear and inflation as noted on the following chart. 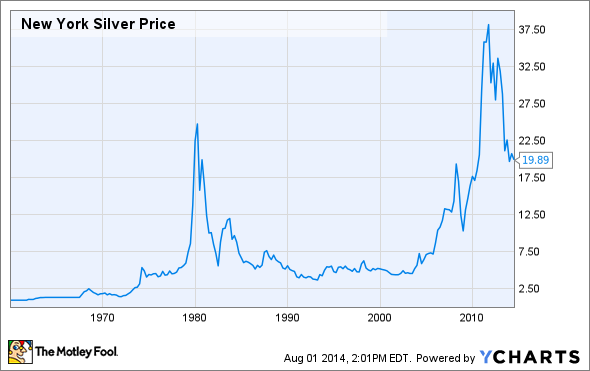 How many ways are there to invest in silver?

While buying bars of silver and having them locked in a vault is one way to invest in silver it's not the most practical investment method for the average investor. Buying items made of silver like silverware, tableware, ornaments, or jewelry, for example, are very practical purchases that also act as an investment in silver.

In addition to that buying silver coins is another way to invest in silver in small doses. In Canada, for example, the Silver Maple Leaf coin is legal tender, while in Utah silver is also legal tender and can be used to pay debts.

In addition to that investors can buy Exchange Traded Funds that are invested in physical silver. This saves an investor from the inconvenience of storing physical silver bars as well as providing them with daily liquidity to easily sell their silver holdings when the need arises. Silver exchange-traded funds have become popular with investors because of the ease of buying and selling.

Finally, investors can also invest in the stocks of silver mining companies. These companies typically mine silver and other metals like gold, copper, and zinc so there is some added diversification. But there is also added risk as these companies might not trade lock step with the price of silver as miss management or higher costs could impact the investment.

Why invest in silver?

In some ways silver is seen as an alternative to investing in gold because both store value. In fact, since the Roman times the price ratio between silver and gold has been closely watched to determine which investment is a better value. Because of this the same factors that drive investors into gold -- namely concerns about inflation -- also drive investors to silver. But because of its industrial value silver's price is affected by economic expansion, which is why the case can be made that it's a better hedge against inflation during times of expansion because of the increased demand for silver from industrial users.

Whether as a hedge against inflation or to profit from an economic recovery silver holds a lot of value for investors. But the combination of silver's industrial value with its value as an inflation hedge still creates a lot of volatility within the price of silver, especially in today's fast paced exchange-traded funds marketplace. That's why in many ways one of the best ways to invest in silver is to simply enjoy its beauty through practical long-term investments like jewelry, which is an investment that loved ones can treasure for years to come.