Pending home sales data is weak and the Case-Shiller house price index is declining, so is the U.S. housing market set to turn downward?

Followers of the housing market got spooked a couple weeks ago by some data suggesting the market was in trouble. First, the recent pending home sales data from the National Association of Realtors showed a 1.1% decline, when economists had forecast a 0.5% increase. Second, the S&P Case-Shiller 20-city house price index declined 0.3% on a monthly basis, when economists had predicted a 0.4% increase. Is it game over for the U.S. housing market?

U.S. housing affordability and homeowner vacancy rates
There's no doubt that the housing market has slowed from the strong growth it saw in 2013, but that doesn't mean it's about to crash. On the contrary, there are four key reasons the market is likely to improve.

First, despite the talk that rising mortgage rates will choke off demand, housing still remains relatively affordable. Take a look at the National Association of Home Builders/Wells Fargo housing opportunity index -- the higher the number, the more affordable housing is. 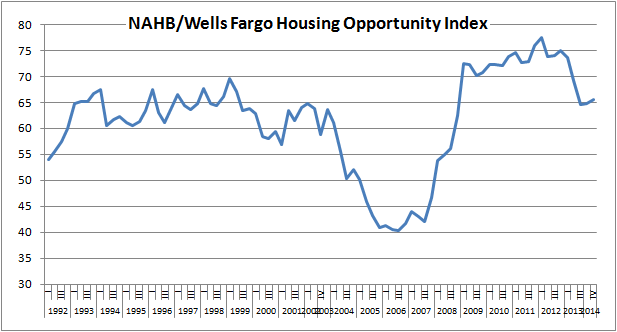 Affordability fell in the second half of 2013, but on a historical basis, it's still supportive of good growth in the housing market. Readers can see that, according to the index, housing is more affordable than it was for most of the 1992-2009 period. 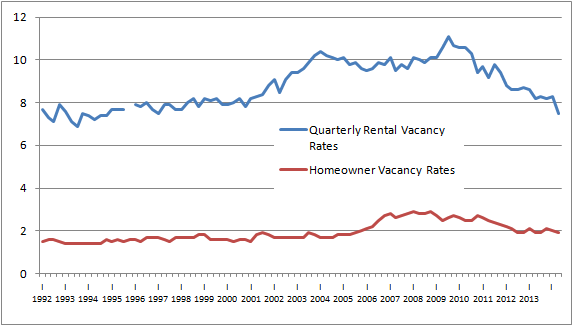 Low vacancy rates imply a housing market where fewer properties are available for rent or sale. In other words, a market where renters and buyers may be pressured to pay more to rent or buy a property. If vacancy rates keep falling, housing demand will surely strengthen.

Towards a sustainable housing market recovery?
Third, it's obvious that rising mortgage rates have affected affordability, and it's likely that they've negatively affected the ability of some mortgage holders to keep up with payments. However, one of the key things for a sustainable recovery is that the banks don't suffer loan losses from failing mortgages. The bad news is that, in response to rising mortgage rates, banks have tightened their lending standards, making it harder for people to get mortgages.

Data from the Federal Reserve Senior Loan Officer Survey shows how demand for prime mortgage loans -- mortgages given to the most credit-worthy borrowers -- has weakened in 2014, while lending standards have tightened as banks protect their balance sheets by being more careful with issuing mortgages -- not good for the housing market in general. 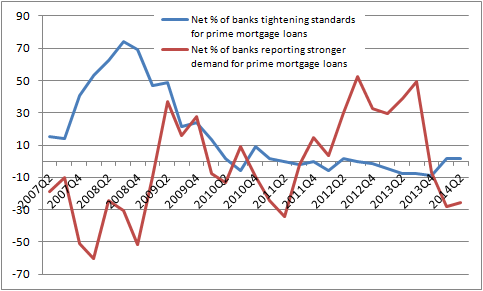 The short-term effect is likely to be negative, but the important thing for a sustainable recovery is that the banks remain in a position to lend as employment continues to recover. Indeed, a recent article in the Financial Times discussed how the six biggest U.S. banks "collectively reported credit losses equal to 0.6 percent of total loans, down from a credit crisis high of 3.3 percent."

In a sense, it's better for the housing market to experience a slower rate of growth from time to time. The reason being that nobody wants the banks to get into a 2008-type of scenario where a period of runaway growth would encourage them to issue a lot of debt that would turn bad. The usual outcome of which is that banks stop lending altogether. Arguably, it's better to have a slow period of growth, in order to make sure that the recovery lasts longer. According to the FT, the good news is that the banks are in good shape to lend.

Fourth, there is strong anecdotal evidence to suggest that the underlying dynamics remain positive. For example, home goods stores such as Home Depot and Lowe's have remained upbeat on housing.

Where next for home prices and the housing market?
The banks' tightening of lending standards -- making it harder for individuals to get mortgages -- is an obvious setback, but it could prove to be a short-term event, provided the economy continues to recover. Housing affordability remains supportive of an increase in house pricing, and vacancy rates suggest that underlying demand remains in place for a recovery.

Ultimately, the conditions are set for long-term growth, even if the market has weakened in 2014. Investors should look for banks to start loosening lending standards as the market recovers from a slow period of growth caused by the initial increase in mortgage rates.

As long as employment gains remain assured, and mortgage rates don't rise too much higher, it's not a good idea to bet against the housing market.