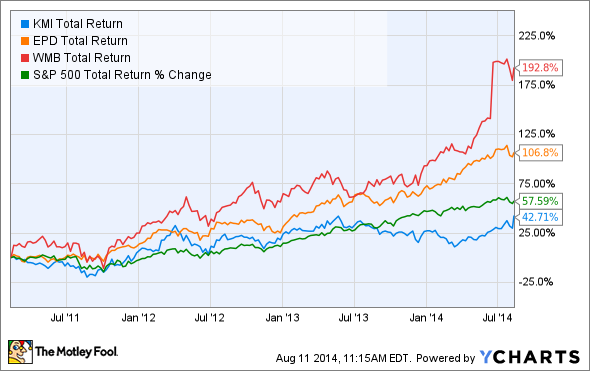 In the past I've written about how Kinder Morgan's $30.4 billion in current and potential expansion projects will be enough to ensure strong distribution growth and market outperformance for decades to come. I've also written about how a potential Kinder Morgan merger could greatly increase growth, should it ever occur. Well on Sunday night news broke that Kinder Morgan was consolidating all its MLPs under its parent company in the second largest energy merger in history (the 1998 Exxon and Mobil merger worth $110.1 billion in 2014 dollars remains the largest).

Terms of the deal
The $71 billion deal is composed of $40 billion in Kinder Morgan Inc shares, $4 billion in cash, $27 billion in assumed debt.

Existing shareholders of Kinder Morgan's MLPs will receive the following premiums for their units (based on friday's closing price):

Existing unit holders of Kinder Morgan Energy Partners and El Paso Pipeline Partners are allowed to choose to receive payment in both cash and Kinder Morgan Inc shares or all cash. 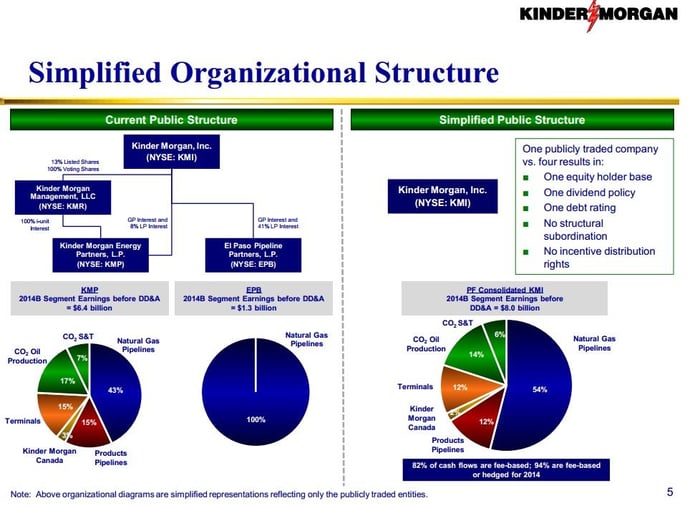 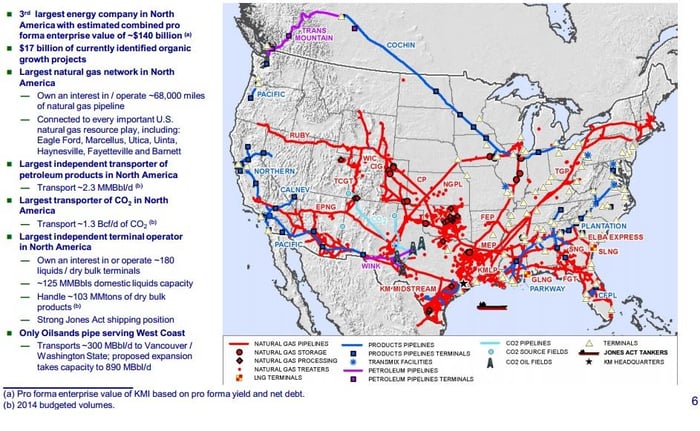 With 80,000 miles of pipeline and 180 terminals, the merger will create the third largest energy company in America by enterprise value ($140 billion) or fourth largest by combined market cap ($92 billion) -- behind only ExxonMobil, Chevron, and ConocoPhillips. The deal is set to close by the end of the year pending regulatory and shareholder approval.

Why the deal is great for investors
There are three reasons why existing shareholders should be overjoyed by this deal.

First, it greatly lowers Kinder Morgan's cost of capital by eliminating El Paso Pipeline Partners and Kinder Morgan Energy Partners' incentive distribution rights and structurally subordinated debt. It will also save Kinder Morgan about $20 billion in taxes over the next 14 years.

The second reason to celebrate this merger is that Kinder Morgan plans on turning on the growth engine in a big way, with plans to "to pursue expansion and acquisitions in a target-rich environment," according to founder, chairman, and CEO Richard Kinder.

In fact, there are a combined $1.5 trillion in potential acquisition and investment targets for Kinder Morgan to pursue through 2035 including over 120 MLPs with total enterprise values of $875 billion and $640 billion in expected midstream infrastructure investments.

Organic growth projects and accretive acquisitions are the name of the game when it comes to growing dividends and distributions, and that is where this merger should make income investors happiest.

Dividend growth restored
Kinder Morgan has announced its intentions to raise its 2015 dividend by 16%, with subsequent 10% annual raises through 2020. 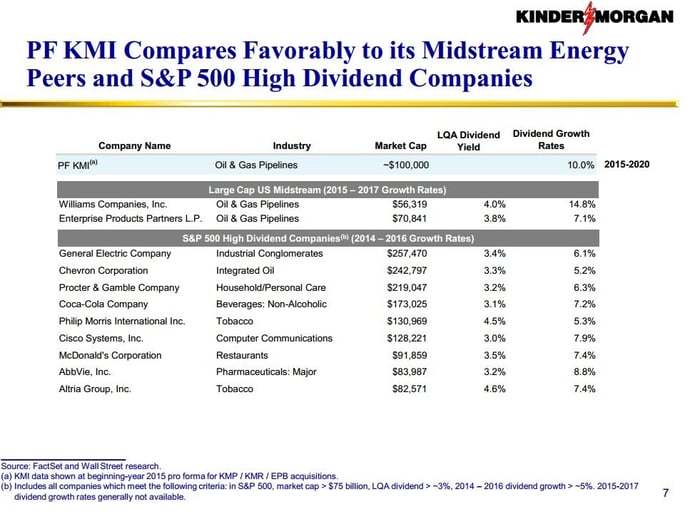 However, Kinder Morgan isn't just for dividend seekers. Because of management's long-term dividend visibility, we know that Kinder Morgan's dividend is expected to be around $3.22/share at the end of 2020. This provides an 8% future yield that is likely to see shares appreciate in value perhaps faster than dividend growth.

In fact, strong capital gains are likely due to the fact that Kinder Morgan has met or exceeded its dividend/distribution guidance in 18 out of the last 19 years.

With Kinder Morgan's dividend growth plan expected to result in $2 billion in excess dividend coverage by 2020, an anticipated six-year coverage ratio of 1.1, and a 94.7% success rate of meeting or beating distribution/dividend growth guidance, actual dividend growth may prove to be higher than advertised.

Foolish takeaway
Kinder Morgan's exit from the MLP industry it helped pioneer is a surprise, but one that's very likely to benefit current investors in both Kinder Morgan Inc and all its MLPs. The new Kinder Morgan is likely to achieve sustained and strong dividend growth that will not just generate strong income over the next decade, but also strong capital gains should Kinder Morgan live up to its historical precedent of beating dividend growth expectations. Long-term investors of all kinds should consider this bluest of energy infrastructure blue chips for their portfolio.