Just about everyone in the West wants nothing to do with this guy right about now, and it's not because he's still doing Fonzie impersonations after all these years.

Between the downed Malaysia Airlines flight and the recent escalation of military activity on the Ukrainian border, Russian relations with the West have really jumped the shark, but the one group that doesn't want to give up on Russia is Big Oil. And for good reason; prospective oil formations such as the Bazhenov shale are enormous, and to walk away from them now could be a major hit to these companies. Let's take a look at why this prospective shale formation is one of the major reason why Big Oil wants to keep the happy days going in Russia.

Not many places can be called "big as Bazhenov" 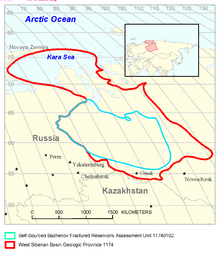 Extent of the Bazhenov Shale (image courtesy US Geological Survey)

Ever since the shale oil and gas boom took off in the U.S., oil companies and investors have all been wondering where the next great shale boom would take off. China, Argentina, and Australia have all had their moment in the limelight, but more and more the signs of the next big boom in shale production seem to be coming out of Russia, thanks to its massive formation -- the Bazhenov shale.

Just about every figure used to describe the Bazhenov shale formation is staggering. The Western Siberian Basin -- the home of the Bazhenov and other shale formations in the region -- is over 850,000 square miles. That's more than all of Alaska and California combined. According to the Energy Information Association, there are about 1.5 trillion barrels of oil equivalent trapped in the Bazhenov, and more than 80% of it is oil. According to the EIA, about 75 billion barrels of that oil are technically recoverable, which gives an overall recovery factor of about 6%. Thanks to some advancements in shale technology in the U.S., recovery factors are improving to double digits, which means a lot more oil coming from this area.

Reducing Reserve Costs
Fields of this size don't come along every day, but they are the ones that can really move the needle when it comes to proven reserves and production for an integrated oil and gas company. In recent years, Big Oil has struggled to obtain new reserves in a cost effective manner compared to the smaller independent producers that have had so much success in shale already.

This shale formation is likely one of the few places that these companies can obtain new reserves on the cheap. Many of the other major projects these companies have in the works are in remote places like deepwater offshore and the Arctic, which are considerably more expensive to implement. Also, this part of Russia has been producing oil for many years, so there is much less infrastructure needed to bring it online.

On top of its size, this shale formation is really a place where Big Oil can make its mark when it comes to shale. That's a large part of why just about every major integrated oil and gas company -- Exxonmobil, Royal Dutch Shell, Total, and Statoil -- all have signed joint ventures with Russian companies in the Bazhenov. Although U.S. shale drilling has not been the most profitable venture for these companies, they all have gained some level of expertise in the hydraulic fracturing process; something that almost no Russian oil company has.

What a Fool Believes
Sure, companies like Exxonmobil and Shell may not be super excited to be working in Russia right now because of unstable political relations, but the potential of places like the Bazhenov shale are just too good to walk away from. If these companies were forced out by sanctions from the West or potentially from Russia, it may not show up on an income statement any time soon -- except maybe BP, as it has a near 20% stake in Rosneft -- but it would have a serious negative impact on the future of these companies. As long as they are able to stay in Russia, they will, and anyone who has a financial stake in one of these companies should be happy about it.