If you want to understand how pervasive advertising is these days, you needn't do much more than open your eyes and look around. Whether it be on your television or computer, billboards, the radio, park benches, or perhaps the T-shirt you're wearing, advertisements are everywhere.

Without advertising it would be extremely difficult, if not impossible, for businesses to differentiate themselves from the competition and bring in new customers. Being such a vital component to corporate growth, this implies that advertising companies could make for sound investments -- but only if you understand the basics of how the advertising industry works.

Here, we'll explore those basic concepts and discuss some of the advantages and headwinds the advertising industry faces.

What is the advertising industry?

In its simplest form an advertisement is mass media content intended to persuade consumers to take action on a product or service. Advertisements act as the calling card for any business, conveying in an often concise manner what a business does and how it can help a consumer. In return for paying the content provider a fee to post its advertisement, the company behind the advertisement hopes that its message will create an increased need for, or consumption of, its service or product, ultimately boosting its top- and bottom-line results and more than making up for the cost of its advertising campaign.

Currently, there are dozens upon dozens of different ways to advertise, some of which have been mentioned above. The most common sources are television broadcasts, newspapers, magazines, radio, websites, and freestanding billboards.

How big is the advertising industry?

In order to understand how big the advertising industry is, we first have to understand its history. For that we have to go all the way back to 2000 B.C. (yes, 2000 B.C.!), to a time when Egyptians carved public notices in steel. The appearance of more modern forms of advertisement, such as print ads and advertising targeted at a branded product, made their debut in 1472 and 1661, according to InfoLinks.

Further down the road, in 1920 and 1941, we'd witness the emergence of the first form of radio and television advertising, which today makes up a sizable chunk of the advertising landscape. Finally, in 1994, early Internet adopters would discover the first advertising banners on Web pages -- a day many Internet users now rue.

In other words, advertising has been an essential component of human history for the past four millennia. Though advertising isn't strictly business-related in nature (e.g., political advertising), the past century and a half allowed the modern landscape of business advertising to take shape as various modes of content distribution -- newspapers, radio, television, and now the Internet -- were invented, allowing business messages to reach further than ever.

Based on figures from Statista, there were more than 12,000 advertising agencies in the United States in 2010. More amazingly, this figure actually shrank from 2008, possibly as a result of the Great Recession, but potentially also a factor of the fierce competition for ad dollars within the industry.

Advertising is also a very lucrative industry. Through the first six months of 2011, based on statistics from Kantar Media, U.S. companies spent a whopping $71.5 billion on advertising!

How does the advertising industry work?

The advertising industry is pretty straightforward, with three primary participants: the business doing the advertising, the content provider, and the consumer.

Businesses will pay a content provider a fee for space on their platform, be it a park bench, a billboard, a radio advertisement, or perhaps a commercial on TV or on online.

The fees that content providers charge vary wildly based on the size of the audience and the known demographics of the audience. Generally speaking, businesses that are advertising want to know as much as possible about the make-up of the content provider's audience so that they can optimize the ad in question to exact as much of a response as possible. Content providers that are more in touch with their audience (e.g., have extensive data analytics) and which boast a sizable reader/listening/viewer base are more likely to be able to charge a premium to businesses to host their ad.

The end of the chain involves the customer who is viewing the ad. The goal, once again, being to persuade the customer to take action, thus vindicating the reasoning behind the ad for the business and hopefully boosting profits for both the company behind the advertisement as well as the content provider who was paid to host the ad.

What drives the advertising industry?

Now that you have a better understanding of how the advertising industry operates, let's have a look at some of the key drivers that affect its performance.

Take global advertising and marketing solutions provider The Interpublic Group as the perfect example. Interpublic, as you can see below, lost about three-quarters of its value between 2007 and 2009 as businesses cut back on advertising spending in light of the Great Recession. However, you can also see that Interpublic's shares have outperformed the benchmark S&P 500 since the U.S. economy hit its trough. 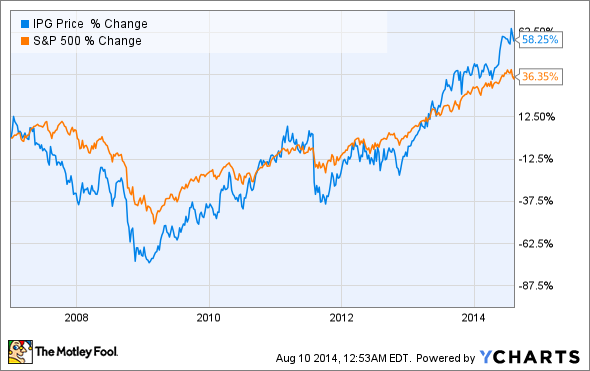 The role that content mediums play is constantly evolving and providing advertisers with a number of markets and content mediums that are largely untapped, representing an impressive growth opportunity and industry catalyst.

The largest online advertisers in the world are still in their infancy with regard to understanding how to monetize their mobile advertising platforms. In addition, higher-growth emerging market regions where content is sparse (i.e., where there is little access to Internet or television) presents a multi-decade growth opportunity for advertising expansion.

Perhaps the biggest headwind for advertisers is the sheer cost of innovation: The landscape of advertising is never static. The costs for billboard operators to transition from poster billboards to digital billboards and the adoption of mobile advertising platforms are two examples of the high costs associated with the industry that have the potential to weigh on profits.

In addition to Interpublic, noted above, three other notable pure-play companies you can invest in within the advertising space are Lamar Advertising (NASDAQ:LAMR), Omnicom Group (NYSE:OMC), and CBS Outdoor Americas (NYSE: CBSO).

Beyond pure-play advertisers, investors can also gain partial exposure to the sector through content providers such as Google (NASDAQ:GOOG)(NASDAQ:GOOGL). Google is the dominant player in the PC-advertising market, though Google is by no means wholly reliant on pure advertising revenue for its survival.