While EOG Resources did deliver an upside surprise to second quarter earnings, that wasn't the biggest surprise the company gave its investors this quarter: It also announced another big boost to its dividend, as well as announcing the addition of another crude oil play to its inventory of high-returning well locations. Both come as surprises, because EOG Resources already boosted its dividend 33% this year and just last quarter announced the addition of four new crude oil plays. Investors weren't expecting similar announcements anytime soon.

EOG Resources' dividend is better than it looks

At first glance EOG Resources' dividend looks rather pathetic. The company's stock yields just 0.62%, which in some instances is less than an investor can earn by simply putting their money in a savings account at the local bank. That's despite the fact that EOG Resources has raised its dividend 16 times in the past 15 years, and by a compound annual rate of 23%. Clearly, the culprit behind the low yield isn't stingy management, but instead a steadily rising stock price. Just take a look at the following chart: 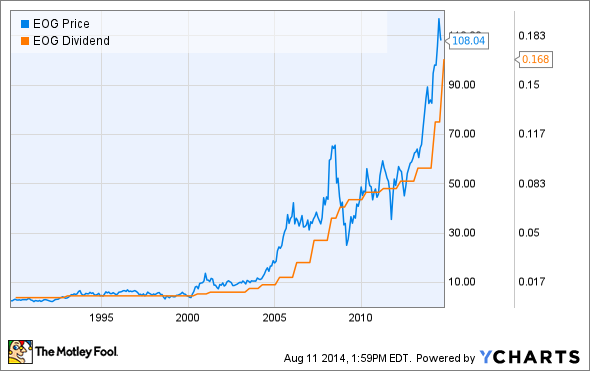 A new addition to the family
The other surprising news this quarter was the addition of the Second Bone Spring Sand to the company's portfolio. As the chart on the next slide shows, this play is below the company's Leonard Shale and above the Wolfcamp in the Delaware Basin.

While EOG Resources isn't yet sure how many oil and gas wells it will be able to drill in this part of the play, it does expect to earn high rates of return on the wells it is able to drill. The company expects to spend about $6 million to complete wells in the play, which are expected to produce about 500,000 barrels of oil equivalent apiece and earn a 100% after-tax rate of return. That's the sweet spot for the company's high-return drilling program.

The addition of the Second Bone Spring Sand marks the fifth new oil play the company has added to its drilling inventory this year. Last quarter the company added four new Rocky Mountain oil plays, which included the Codell, Niobrara, Parkman, and Turner. The addition of these plays, along with the rest of the company's portfolio of opportunities, provides it with 15 years' worth of drilling at its current pace. That's up from a 12 year drilling inventory last year at this time.

Investor takeaway
EOG Resources surprised investors with earnings that were even better than analysts were expecting. However, the biggest surprises were the company's second dividend boost this year, and the addition of another new oil play. Those two announcements suggest that EOG Resources stock still has plenty of upside for long-term investors.