This article originally appeared as part of ongoing coverage in our premium Motley Fool Rule Breakers service...we hope you enjoy this complimentary peek!

It hasn't been a knd year to shareholders of ExOne (NASDAQ:XONE), our leading industrial 3-D printer. Shares are down 50% in 2014; the last two times quarterly reports were released, the stock dipped an average of 13%. And if that weren't enough, almost half of the company's shares are currently being shorted.

But because we're long-term investors, we know that this is the price we pay for investing in companies with disruptive technologies. If you own shares, or are considering adding them to your portfolio, here are three big metrics to watch.

I'm on my first metric and I'm already contradicting myself!

Yes, we're long-term investors, and no, we shouldn't worry too much about meeting Wall Street expectations in any given quarter. That being said, with so many shares being shorted right now, the stock is bound to make big moves after earnings are released. How the company performs versus those expectations will determine which way the stock moves.

Analysts are expecting ExOne to report a loss of $0.13 per share on revenue of $12.1 million. It's important to remember that ExOne is a small company selling machines that go for over $1 million each. If a customer dragged its feet in on an order until after the end of the quarter, it could have an outsized effect on these results -- while not really reflecting any weakness in the business.

Perhaps more important will be the company's guidance for the rest of 2014. Analysts expect ExOne to show a loss of $0.45 per share on revenue of $55.5 million for the year.

I would argue that the revenue figure is the most important, as ExOne has been investing heavily in a new initiative -- ExCast. Though it will benefit the company in the long run, ExCast is going to cost a pretty penny over the short term.

2. ExCast: the hook in capturing OEMs
At first, ExOne believed that it could sell its printers to foundries. But management -- perhaps naively -- failed to recognize that the technology would undercut all of the proprietary knowledge foundries have built up over the years. They wanted nothing to do with the printers.

That meant ExOne had to shift its strategy and focus directly on original equipment manufacturers, or OEMs. It's no easy task to convince an OEM to fork over millions for a new, and relatively untested, 3-D printer. So to grease the wheels, ExOne made the decision to focus on Production Service Centers, or PSCs, -- dubbing the strategy "ExCast."

To be clear, the company is still as focused as ever on selling the actual printers themselves. But ExOne realizes that it needs to build out a base of production centers that can help get their product in the right hands before printer sales will really take off.

This strategy means that OEMs can order parts to be printed using ExOne's technology without having to pay for the printers up front. It allows businesses to get a taste of what the technology can do in a low-risk environment. If the experience goes well, companies will see that paying for a printer of their own is more cost-effective, leading to future printer and parts sales.

As you can see, PSC growth was slow until last quarter, when it picked up by 32%. 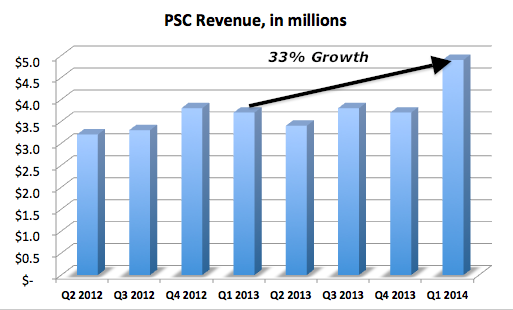 Investors should look to see if the company will continue that trend. If PSC revenues increase by at least 25% during the second quarter, it would bring segment revenues to approximately $4.2 million. Investors should use that figure as a rough guide to see if customers are taking advantage of PSC to test ExOne's printers out.

Furthermore, investors should listen in to the conference call. ExOne has stated that it wants to, "vertically integrate [the full value chain of ExCast] under ExOne leadership and control." That includes everything from printing a mold, to metal casting, to a final shipment to ExCast customers.

3. Ironing out the mistakes
Some things a company can control, some things it can't. As Dave Meier pointed out last quarter, there were two significant events that dinged the company's earnings release. First, it was unable to book a large order from a Russian customer. Management said that it would be pushed out until the second quarter. Because of that, printer revenues actually contracted instead of expanding.

Second, the company was forced to pay for mistakes made by a foundry in pouring castings for Sikorsky Aircraft. The cost of reprinting the molds and expediting the shipments cost the company five percentage-points in gross margins.

Though ExOne made the right move with Sikorsky, and can do little about the timing of Russian orders, it would be nice to see management smoothing out these processes. I'll be listening closely to the conference call to see if there were any other delays, or fires to be put out this quarter.

ExOne Co Earnings Preview: Get Off Your Pins and Needles and Watch These 3 Metrics @themotleyfool #stocks $XONE Next Article
Current