For the third-consecutive quarter, J.C. Penney (OTC:JCPN.Q) notched higher revenues and comparable sales. Though it's still printing losses on the bottom line, this department store retailer is in a much better place than it's been for a long time, and has earned the trust investors have placed in it.

It looks like blue skies ahead for the once-troubled department store retailer.

Penney reported net sales of $2.8 billion, a 5% increase above the $2.66 billion in the year-ago period, as comps increased 6%, and improvements were made in clearing out its clearance items. Where once it had to give away the store to get people to come in, the retailer has apparently been able to become a little more selective.

Equally important for Penney was the continued strength of online sales that jumped nearly 17%, to $249 million. The omni-channel approach it has undertaken continues to get results, and helps fill in the gaps that still need to be plugged in in its bricks-and-mortar operations. Orders are growing not only from those that were placed on the website, but also placed in the store. With just 30% of orders picked up in the store, it has an opportunity to use that to drive traffic higher. 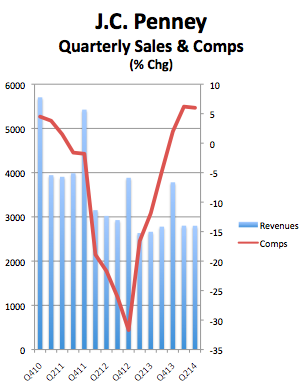 What we're seeing is steady improvements all across the board, but particularly in profit margins, which have fattened up nicely. Gross margins, for example, improved 640 basis points from the same quarter last year, but were also 290 basis points higher sequentially from the first quarter.

This sets up Penney to be well positioned for the back-to-school season, which we're really in the midst of at the moment. Week 26 of the year is the retailer's second-biggest week of the season, only behind Easter, and it enjoyed double-digit comp growth. With July ending well, it's only right that Penney should be hopeful about what the immediate future brings.

It's forecasting comp growth for the third quarter to be a four-peat, rising once again by mid-single-digit levels with second-quarter gross margins of 36% to be repeated, as well. For the full year, comps ought to be up by like amounts, but gross margins should be significantly improved from 2013. Perhaps, more importantly, J.C. Penney should be free cash flow positive once more.

Obviously, though, the department store is still in turnaround mode While it has significantly improved its financial position -- it's liquidity is such that the $500 million credit line it added earlier this year (consolidated, really) will be truly advantageous inventory-wise as it moves toward the Christmas season -- there are headwinds that still need to be addressed.

For example, its kids department has been a disappointment, the home store was a drag, and footwear and handbags both needed work. They've all got new teams that are leading them forward, and brands like Disney are solid performers in kids. The home store was up double digits, and its in-store business rose 25% from last year. They're not where they need to be, but certainly seem to be on their way.

Penney is no longer needing to mark merchandise down to fire-sale levels.

Home, for example, is heavily represented in its clearance numbers, but clearance, as a whole, was down $125 million year over year. Penney isn't trying to get to zero clearance -- just to its historical levels -- where it controls the message, and the margins.

Traffic, however, remains an issue, and it was down, once again, in the quarter. It's an issue, however, that's plaguing everyone in the industry, and both Macy's (NYSE:M) and Kohl's (NYSE:KSS) have experienced the same effects. Even so, Penney is stealing share from them and, as its traffic was sequentially better, it finds itself well ahead of Kohl's, at least, which seems to be stuck in the same rut that mired Penney. Its comps were negative, once more -- the fourth-straight quarter it's seen a decline.

In short, J.C. Penney is on the road to recovery. It's attracting new customers, and winning back ones that previously fled, noting that credit penetration is up 160 basis points from last year, while its known customers are up 25%. That heralds continued improvement going forward, which ought to give investors confidence that the third time is truly the charm.