Handbag maker Coach (NYSE:TPR) has often appeared directionless, a brand without cohesion that lacked a way to connect with the consumer. The company is throwing a lot of ideas at the wall lately hoping something sticks, but instead all it's really done is give off mixed messages that have confused consumers and may undermine any chance of a turnaround.

The Coach handbag in its native environment.

On the one hand it says it's been too promotional, its bags too ubiquitous, and that its outlet stores undercut the premiums paid by consumers at its full-price stores. As a result, it's closing 70 stores, a fifth of its North American footprint, scaling back to holding just two semi-annual doorbuster sales each year, and changing its positioning from one of "accessible luxury" to "modern luxury."

That could be a fruitful pursuit because Coach's bags above $400 comprise 21% of sales, up from 16% a year ago. Indeed, handbags above $600 were its strongest price point, but hand in hand with that change in its core message is a conscious decision to become both a dual-gender brand and a "lifestyle brand," one that sells key fobs, shoes and fragrances right along with its handbags and leather goods.

Living la vida loca
That sounds good for a company targeting the aspirational customer, but maybe not so much for one seeking to be a premium goods destination. No longer is it "a leading marketer of modern classic American accessories," but rather it is one featuring "modern luxury accessories."

That's a subtle but important difference especially when it doesn't have a marquee name on the masthead to bring people into the "lifestyle." Where Michael Kors (NYSE:CPRI) and Kate Spade (NYSE:KATE) can turn to their company founders to attract consumers to their brand extensions of stationery, personal organizers, pajamas, and eyewear, Coach has had to rely upon the hired help to generate the same cachet.

Last year Stuart Vevers joined the fold as Coach's top designer, taking over for Reed Krakoff, who bought out his namesake brand from the handbag maker after 16 years of service as its creative director.

Don't discount the impact of sales
After years of leading the market with growth that exceeded the industry norm, now it's Kors and Spade who are recording substantial gains in both sales and comps. Still they're also seeing their stocks decline because of the discounting they've had to engage in, something Coach investors are all too familiar with.

So, it's a bit of a problem across the industry, but Coach compounds it by offering conflicted signals about what it's going to do, and then fails to connect with consumers anyway.

Logo-heavy gear like this hasn't sold all that well.

How gauche!
According to its own marketing research, Coach has the top mind-share with consumers in three of the five categories associated with the emotional attributes of a brand, but comes up short in what may be regarded as two of the most crucial areas.

Carrying a Coach handbag apparently makes a woman feel confident, put together, and complete, which is all fine and dandy, but it falls down on being fashionable and sophisticated. For a fashion-oriented company to not be seen as fashionable is a huge hole it needs to fill.

I would imagine an accessories maker like Coach could actually stumble badly on the first three so long as a customer views its products as fashionable and sophisticated. You could overcome your other shortcomings because fashionability  would allow you to play toward your entire catalog of products, helping you sell more accessories to create a total package.

But Coach has gotten it backward: Because its handbags aren't viewed as fashionable, there's little it can sell to make up for that and the whole suffers.

Even in its fastest-growing market, China, clouds are forming. It continues to post double-digit growth, that's true, but the rate of that growth is falling dramatically. And with the country suddenly experiencing its own economic slowdown -- China's central bank said extension of new credit fell in July to its lowest level since the global financial crisis and its housing sector is much worse than it's previously let on -- the probability that Asia won't be able to prop up Coach's business much longer looms large. 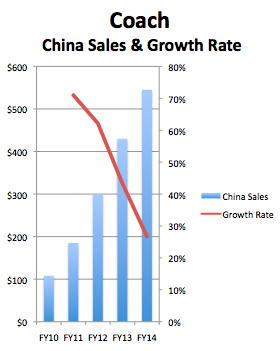 Similarly, men's sales is another trend the leather goods maker is counting on to keep it going, but as we've seen with China sales, the rate of growth is falling precipitously. Coach has also pushed out to 2017 when it believes men's will hit $1 billion in sales annually, suggesting a compounded annual growth rate of 12% or so, and falling to 10% within the next five years. 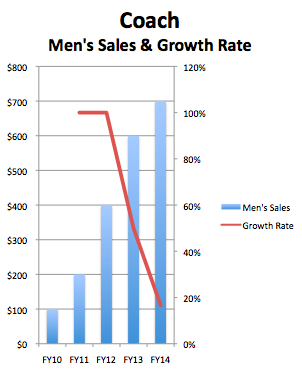 What this tells us is that Coach's North American business is a shambles, and despite the seemingly robust growth in China and for men's goods globally, there is significant deceleration under way. Of course, no retailer can continue growing at exponential rates, but that's just the point: Coach can't count on these two avenues to bolster its business any longer, which calls into question whether its stock can sustain its current levels.

There's still room below
Looking at both trailing and estimated multiples, shares of the handbag maker don't look overpriced, but when you compare it to its sales and its forecasted growth rate, Coach shares look very rich.

In short, Coach needs to decide exactly what part of the market it wants to be in, play to its strengths there, and stick to it. As it is, the scattershot approach it seems to be taking will only serve to confuse consumers more.