Time is a funny thing. Months and years seem to fly by. Yet days at the office can move so slowly.

But when it comes to investing, sometimes a simple chart can reveal why time can be such a valuable resource, yet at the same time, a terrible thing to waste.

Imagine if I told you $200 a month could be turned into $5 million. You'd likely think I was crazy. But as you can see in the chart below, it's not only possible, but some could even argue it's probable: 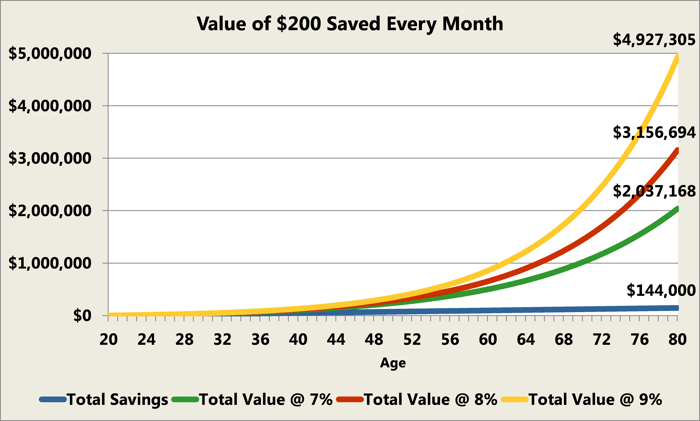 The chart is showing what $200 put into an S&P 500 index fund through a retirement account each and every month beginning at age 20 and stopping at age 80 would be worth after decades and decades of patient saving and investing. Of course we can't project what the future returns will be, but you can see the remarkable growth even at a very conservative 7% annual interest rate.

All of this is to say, projecting you'll see an average return 9% over such a massive period isn't some pie-in-the-sky assumption, it's a reality. 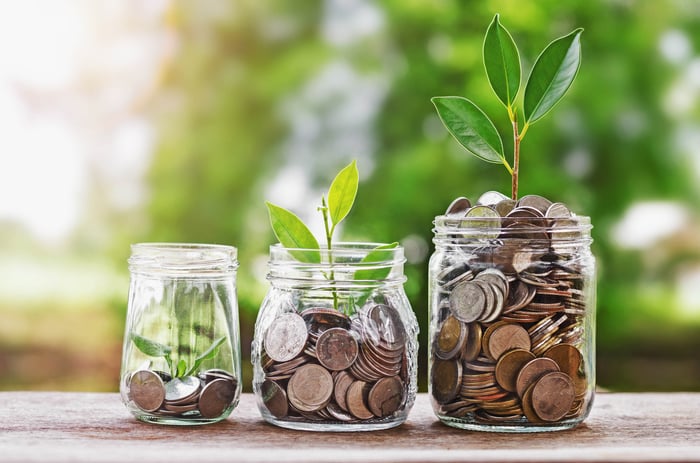 The thing is though, $200 a month sounds like a lot. Yet in small steps, you can get there.

According to the latest data the average American made roughly $46,500 a year. That means saving a little more than 5% of what you earn would equal to $200 a month.

But even more realistically, that means saving $6.58 each day.

In 2012, Americans spent nearly $20 a day on things like eating out, apparel, and entertainment. Sure there's fun to be had, but isn't possible to eat in a little more, or perhaps get the $1.29 movie from Redbox instead of a $10 ticket at the theater? Maybe it's a question of whether or not you really need that new shirt or if you just want it, even if it's marked on sale.

Instead of going to a sit-down restaurant for lunch and getting a $10 meal, a $2.50 Coca-Cola, and leaving a 20% tip -- so you're out $15 plus tax -- maybe you should head to a Chipotle or a Panera Bread. Or next time you're at the supermarket, buy the store brand peanut butter instead of Jiff. They're just peanuts.

Or instead of getting the Spinach Feta Wrap and a Venti Skinny Vanilla Latte at Starbucks you stick to a Multigrain Bagel and a Grande Brewed Coffee, saving you $4.50. Maybe it's time to hold off on the newest pair from Nike, or perhaps wait until next summer for the latest handbag from Michael Kors.

Heck, thinking big, maybe instead of an Acura, you could get a Honda.

When we really sit down to look at what we need, versus what we want, saving $6.58 a day may be easier than we think.

Having 60 years to save is easier said than done, and as you can see, starting early is the key to this scenario. If you wait 10 years, the total amount you save out of pocket falls by a little more than 15%, but the value of your investment is cut in half thanks to the powerful work of compound interest.

But there's always time to catch up, and you shouldn't be discouraged. You can nearly match the returns if you double your savings from $200 to $400 starting at age 30.

As they say, there's no time like the present to start saving and investing. You'll be glad you did.