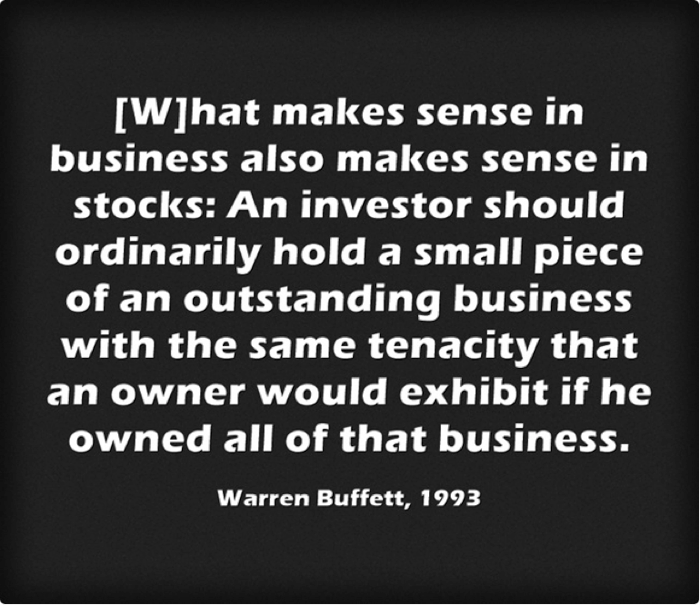 Warren Buffett once compared his stock-picking style to his shopping habits, noting, "I like buying quality merchandise when it's marked down."

Sounds simple enough, right? Like the frugal shopper in all of us, Buffett loves finding a good bargain.

In investing, however, the Oracle of Omaha excels where the rest of us so often stumble: Once he commits his money to a stock, he cherishes that ownership interest like few other shareholders. This long-term perspective provides ample time for Buffett's businesses to flourish, thereby compounding the money that Berkshire Hathaway (NYSE:BRK.A)(NYSE:BRK.B) makes from his stock picks.

In 1993, Buffett described why this unique level of commitment makes sense in his letter to shareholders, as conveyed in the quote shown above. The charts that follow reveal why other investors should take a page out of Buffett's book.

Shareholders' shrinking attention span
It would be difficult to single out one trend as the most important change in the investing field during the past half-century, but the dwindling attention span of investors would definitely rank near the top.

From 1960 to 2010, the average holding period for owners of NYSE-listed stocks shrunk from 8.3 years to a mere six months. Here's what that looks like in a simple bar chart: 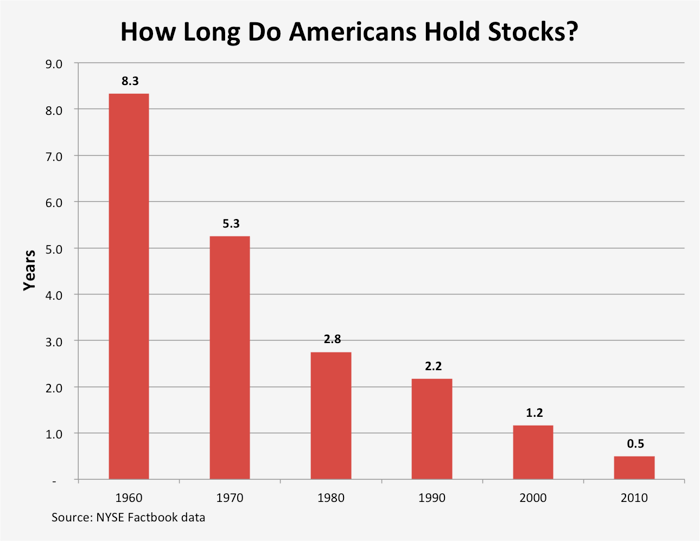 In other words, Americans once held on to their stocks like they held on to a reliable car -- for the better part of a decade. Fast-forward 50 years, however, and our thinking as it relates to those two assets has diverged dramatically. We're ready to replace a long-term investment with a new security every six months, or around the time that new-car smell is just starting to fade.

To witness such a steep decline is nothing short of astounding. Since the 1960s, not a whole lot has changed in terms of what stock ownership offers to investors. We continue to purchase shares that entitle us to a fraction of a company's future profits. Those companies allocate resources to operations or long-term projects and pay out the remainder to shareholders. As profits grow, we realize a gain in our asset value or receive proceeds in the form of regular dividends, just as we always have.

Meanwhile, business cycles have not shortened, but instead they follow the same typical four-to five-year pattern of contraction and expansion. That's a trend that's more or less remained constant for 160 years.

The act of trading, of course, has changed significantly. Even the nonprofessional investor can conduct cheap, real-time trades today, and he can do so from almost anywhere in the world with the use of a smartphone. But reduced friction in trading can hardly be blamed for such a profound shift in our investment approach.

The main culprit here is a radically different perception of what stocks and the market as a whole represent. A dense cloud of short-term thinking appears to have blurred the vision of many investors, while disciples of the buy-and-hold approach -- including Warren Buffett -- have been able to remain above the fray. As our time frame contracts from years to months, Buffett's found success in a holding period that can often be measured in decades.

The simple genius behind Buffett's approach
Take a look at the chart below. What it shows is how starkly different Buffett's approach is from the average investor's. Not only has he clung to some of his most famous stock picks, including Coca-Cola and GEICO (which Berkshire now owns outright), but the average holding period across all of Berkshire's common stock investments is an eye-popping 20 years. In today's market, that's 40 times as long as the typical investor's holding period! 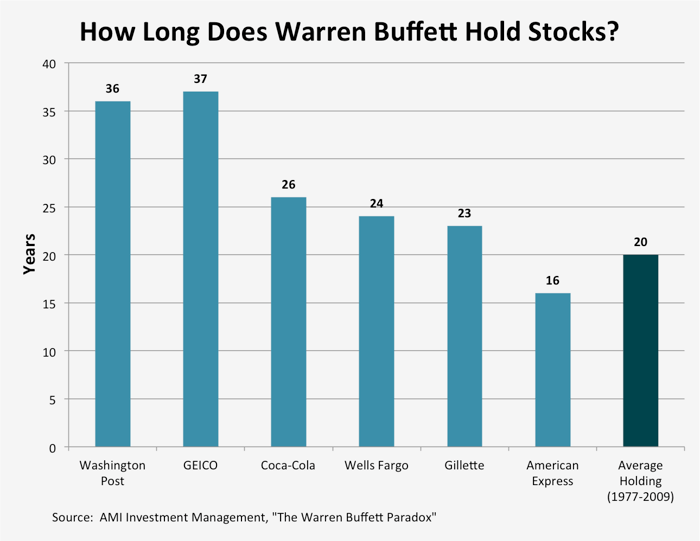 As always, what's particularly impressive about Buffett is his simple approach and consistency, even when he sees the rest of the herd moving in a different direction. The data reflected in the chart above includes every common stock investment made by Berkshire from 1977 to 2009, a period of time when the behavior of most investors was changing considerably. Throughout that time frame Buffett stuck to his guns, and he had a simple rationale for doing so.

Instead of thinking like a trader, Buffett adapted a true owner's mentality. Even when Berkshire owned only a tiny slice of a company's common stock, Buffett pretended as though he owned it all. By putting himself in the shoes of an owner, Buffett acted like one. Here's how he described this tactic in his 1993 letter to shareholders:

A parent company that owns a subsidiary with superb long-term economics is not likely to sell that entity regardless of price. "Why," the CEO would ask, "should I part with my crown jewel?" Yet that same CEO, when it comes to running his personal investment portfolio, will offhandedly -- and even impetuously -- move from business to business when presented with no more than superficial arguments by his broker for doing so.

In acting like an owner, Buffett hardly ever follows those temptations, and this strategy has served him quite well. Recent data show that the average investor's 30-year annualized return was a meager 1.9%. Meanwhile, Berkshire's compounded annual gain since 1965 is a staggering 19.7% annualized.

Buffett's owner-centric strategy might be as rare as a black swan riding a unicorn these days, but the results speak for themselves. If you want to rid yourself of the temptation to hop in and out of the market, think like Buffett does. Think like a real owner.