America's oil production is on a roll. After peaking in November of 1970 at 10 million barrels per day (bpd) and declining for nearly 40 years to a low of just 5 million bpd in 2008, today's oil production has soared 67%. The Energy Information Administration (EIA) is expecting another 13.6% increase by 2016 to 9.5 million bpd, before production tapers off in 2020.

This miracle has been made possible by soaring shale oil production out of Texas and North Dakota, which saw their production levels jump 117% and 177%, respectively, from 2010-2013.

Scott Scheffield, CEO of Pioneer Natural Resources, recently made the news when he stated that he believes U.S. production could not only beat our old record, but could double from last year's levels to 14 million bpd.

Why would the CEO of a major U.S. oil company make such grand claims? This article will explain the reasons for Mr. Sheffield's optimism regarding U.S. oil's continued renaissance and the ramifications for international energy markets and the U.S. economy. 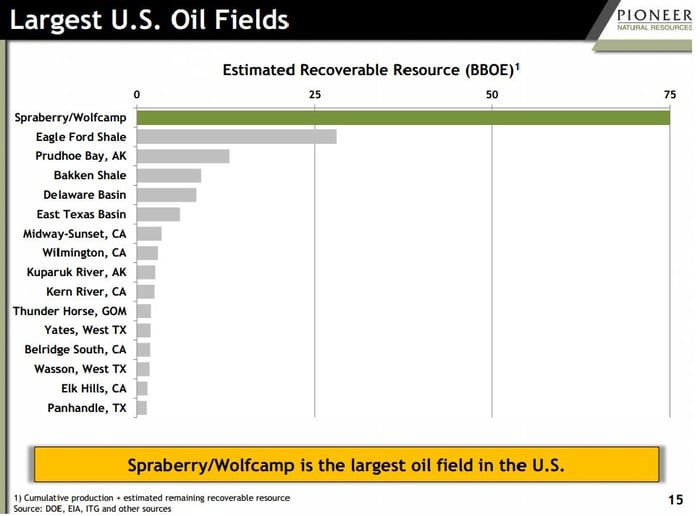 Three catalysts for continued production growth
While the recent success of U.S. oil production and its large potential is impressive enough, there are three factors that could cause production to continue to climb much higher and longer than the EIA or even Mr. Sheffield are expecting.

The first of these is the fact that estimates of technically recoverable oil are likely to increase dramatically in the years to come. For example, in the EIA's 2011 world shale and tight oil report, the organization estimated that the world had 32 billion barrels of technically recoverable shale/tight oil reserves. By 2013, those estimates had increased nearly 11-fold to 345 billion barrels. Given the fact that the EIA estimates 3.357 trillion barrels of shale oil resources exist in the world, even today's lofty estimates are likely only scratching the surface of what future technology can accomplish.

Which brings me to the second cause for optimism, technological innovation. Steven Mueller, CEO of Southwestern Energy (one of the largest gas producers in America), recently expressed confidence that energy companies will be able to greatly increase energy production out of "all of Midland and West Texas... this is an area ripe for some huge increases."

The key to this increased production is improvements in technology such as better hydraulic fracturing, horizontal drilling, and enhanced oil recovery methods. This last technique specifically refers to CO2 injection into oil wells, which can increase shale oil recovery rates from as low as 2%-3% to 15.1%, and simultaneously help fight climate change.

While 15% recovery rates may not sound impressive, consider this: For each 1% increase in global oil recovery rates, the world gains up to an additional 88 billion barrels of economically recoverable reserves. That's enough oil to supply the world for nearly three years.

The third oil production growth catalyst is economics. The EIA expects the long-term price of oil to increase to $141/barrel from today's $104/barrel by 2040. While that 36% increase may appear steep, it only represents a 1.2% annual increase in oil prices, which is less than the current rate of inflation of 2.1%.

Slowly rising oil prices will mean oil companies can continue to increase spending on new technology and production expansion projects -- they already spend $650 billion/year -- which is likely to keep U.S. economically recoverable reserves estimates rising, right along with our production and our economy.

Jobs and global security
According to analyst firm IHS, $890 billion in new energy investment through 2026 could create as many as 1.1 million new, high-paying jobs, and increase the economic growth rate by 0.75% per year.

Besides obvious economic benefits, increasing U.S. oil production could be a boon to geopolitical stability. For example, right now, civil wars and unrest in Iraq, Syria, and Libya, and sanctions against Iran, mean that 4% of global oil supplies are off the market. The threat of oil sanctions against Russia means that number could, in a particularly dire scenario, quadruple to 16%.

A doubling of U.S. oil production would greatly help America and its allies reduce their energy dependence on hostile regimes, many who wish to undermine us or outright do us harm.

America's oil boom has been nothing short of spectacular, but there are many reasons to believe the best is yet to come. Surging U.S. oil supplies may never make the U.S. energy independent, but it can marginalize the importance of politically unstable tinder boxes like the Middle East and provide a major boost to the American economy.