It's been an incredible three years for Celgene (NASDAQ:CELG), as evidenced by its better-than-tripling in share price and noticeable top-line and bottom-line growth. 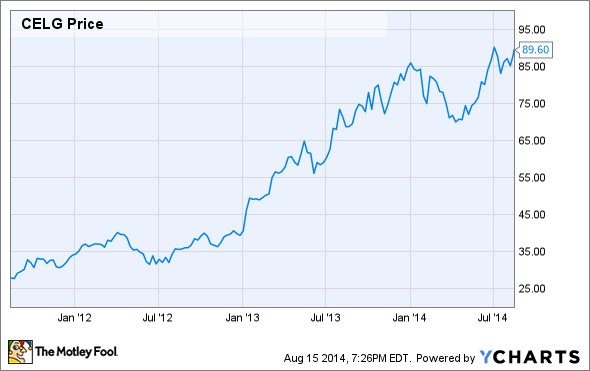 We saw this growth carry over into its recently reported second-quarter results, wherein it delivered sales of $1.85 billion, up 18% from the year-ago quarter, while adjusted profit jumped to $748 million, a rise of 15% from last year's comparable period. As CEO Bob Hugin noted, "Strong second quarter operating and financial results demonstrate the significant momentum of our portfolio and support raising our 2014 guidance."

But, like most earnings reports, Celgene's just hints at the real growth drivers behind its business. So let's have a deeper look at the three big catalysts that could cause Celgene's stock to head higher.

Before we do so, I should warn readers that even if a bullish thesis might look perfect on paper, there's no guarantee of success. Competition, external factors beyond Celgene's control, unsuccessful drug launches, and a number of other factors could easily send Celgene's stock lower. So keep the idea that the stock market is a two-way street in your head as you read this optimistic analysis of Celgene stock.

Perhaps the biggest catalyst for Celgene, and the most apparent reason its share price could head higher, is the potential for the company to expand drugs already approved by the Food and Drug Administration to additional indications.

If you recall, Celgene announced in January that it anticipates $13 billion to $14 billion in revenue and adjusted earnings of $7.50 per share by 2017 (adjusted for its recent split), and that it expects to get to these figures primarily through organic growth. By comparison, for fiscal 2014 Celgene expects to report revenue of at least $7.6 billion and adjusted EPS of $3.60-$3.65. In other words, in just three years and change Celgene's top and bottom lines could nearly double!

Specifically, I would point to Revlimid, Abraxane, and the recently approved Otezla as the three drugs whose label expansion could most help Celgene meet its lofty guidance.

Revlimid is already on pace to top $5 billion in annual sales either this year or next year. It's been a staple for treating various types of blood-borne cancers for years, and has a real opportunity to grow sales substantially by expanding into a number of first-line indications, including newly diagnosed multiple myeloma, first-line follicular lymphoma, and first-line diffuse large B-cell lymphoma (ABC-subtype).

Cancer drug Abraxane could be in line for a significant expansion of its approved indications. With Abraxane already approved to treat metastatic breast cancer, as well as first-line advanced pancreatic cancer and first-line non-small cell lung cancer, Celgene is rapidly moving to expand its indications, including for first-line triple negative breast cancer.

Finally, Otezla's potential in the inflammation market -- first with its recently approved psoriatic arthritis indication, and potentially with psoriasis and rheumatoid arthritis, which are currently under review by the FDA and in phase 2 studies, respectively -- could add some pep to Celgene's step.

Make no mistake about it; Celgene wants to grow from within. But the company isn't turning a blind eye to intriguing external growth opportunities, either.

A recent Celgene presentation lists more than two dozen external collaborative partnerships, which could result in a number of new therapies being discovered that may lead to big gains in Celgene's stock.

One such collaboration which we've discussed previously is a partnership with OncoMed Pharmaceuticals. Announced in December, OncoMed received $155 million in upfront cash, a $22.5 million equity investment from Celgene, and could be privy to more than $3 billion in development and regulatory milestones based on the performance of six collaborative experimental compounds.

OncoMed is attempting to develop drugs which target cancer stem cells, the perceived origin of cancer metastases, in order to attack cancer at its source rather than simply trying to control cell replication. Because this represents a new pathway to attacking cancer, it could put Celgene in prime position to benefit if OncoMed's therapies (at least the ones Celgene is partnering with) succeed in clinical studies.

Another promising collaboration comes from Agios Pharmaceuticals and experimental compound AG-221, which targets IDH2-mutant positive hematologic malignancies. Agios already received $130 million upfront, but with good reason: though still early in studies, AG-221 delivered an objective response in more than half of all evaluable patients and demonstrated a complete response, with durations lasting between one to four months, in six of 25 evaluable patients.

Celgene may appear to be forking over a lot of upfront cash to get licensing rights to these compounds, but if they prove as effective in late-stage studies as they've appeared in preclinical and phase 1 trials (admittedly a big if), then Celgene's investments will be more than repaid over the long run.

Successfully launching new therapies is another big area of potential for Celgene. We know Revlimid and Abraxane are two cornerstone drugs that are paramount to the success of Celgene. And with strong brand names and (hopefully) new indications coming online, these well-known drugs could have substantial further ramping.

Otezla, which was only approved by the FDA in March to treat psoriatic arthritis, is perhaps less well-known. Even though Otezla is expected to become a big part of Celgene's portfolio -- consensus annual peak sales estimates are $1.2 billion, according to EvaluatePharma -- it's a relatively unproven therapy that Celgene will have to work toward getting insurers and physicians to latch onto. Through the first 15 weeks Otezla has impressed, but its continued maturation provides yet another opportunity for Celgene to demonstrate how its cohesive management team can introduce a new product and exceed Wall Street and investors' expectations. But thinking even longer term, there are also the variety of other drugs from partnerships (as mentioned above) and internal sourcing that Celgene will be hopefully ushering to market over the next several years. If management does a good job of commercialization, the company's growth ramp could continue.

Celgene clearly has a lot for growth-seeking investors in the biotech sector to like, including a deep pipeline with plenty of expanded label opportunities, as well as more than two dozen key collaborations. Based on management's estimated growth trajectory at the midpoint, Celgene is on pace to grow its top line by 78% between 2014 and 2017 despite trading at less than 19 times forward earnings. That's a very attractive proposition, and one that should have investors digging more deeply into the story behind this company.