Healthcare conglomerate Johnson & Johnson (NYSE:JNJ) might be a $280-plus billion dollar company, but it's certainly not growing like one as evidenced by the company's robust growth reported in the second quarter.

For the quarter, Johnson & Johnson delivered impressive revenue growth of 9.1% year-over-year. Though J&J's operations are well-diversified across a number of segments, including pharmaceuticals, medical devices and diagnostics, and its consumer products division, it was the company's pharmaceutical segment and new drug launches that provided the bulk of the boost. As CEO Alex Gorsky noted in J&J's earnings release, "Our strong second-quarter results reflect the continued success of our new product launches and the progress we have made in achieving our near-term priorities."

But, could Johnson & Johnson stock head even higher? 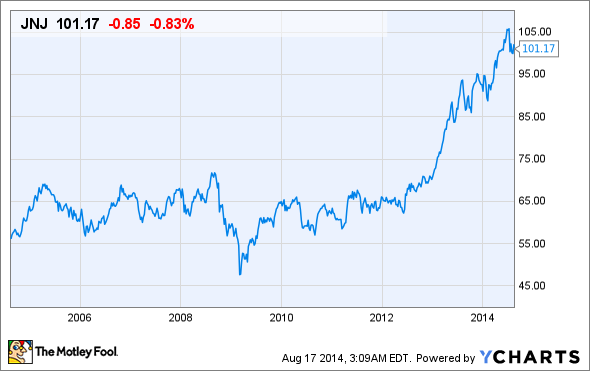 I'd suggest the idea is quite plausible, but you won't find the catalysts responsible for such a move by scratching the surface of its earnings report. Instead, we have to dig deeper and look at the big picture growth drivers which have the potential to push J&J's stock higher.

However, before we dig into three major catalysts that could cause Johnson & Johnson's stock to rise, I'd be remiss if I didn't remind you that just because I'm offering a bullish thesis on investing in J&J today doesn't mean that its share price will rise. External factors beyond the company's control, unknown factors such as clinical trial results, and a bevy of other events could just as easily send J&J lower. So as you read on, keep the two-sided nature of the stock market in mind.

As I mentioned previously, while all of Johnson & Johnson's segments offer an opportunity for growth, it's the company's branded drug portfolio that has been driving the upside lately. The reason is that branded-drug margins often exceed 70%, 80%, and in some cases even 90%, allowing the innovating company to reap the rewards of its development process. In contrast, medical devices and diagnostic equipment can often times be commoditized, thus leading to lower margins, while a highly competitive consumer products environment certainly leads to smaller margins. When it comes to drug launches since 2009 there simply isn't a large pharmaceutical company that's done it better than Johnson & Johnson. Within the past five years it's brought 14 new drugs to market with cumulative total sales over that time period of $12.47 billion. By comparison, that's more than Novartis and Gilead Sciences, the No.'s 2 and 3 on the list, combined!

These promising new drug candidates include blood cancer drug Imbruvica, which is licensed from Pharmacyclics, as well as anti-clotting drug Xarelto.

Xarelto, which was developed by Bayer but is licensed to J&J in the United States, was first approved in 2011 to prevent stroke in people with abnormal heart rhythms, but has since seen its label and sales totals expand. Within the U.S. sales for Xarelto rose 91% year-over-year to $361 million in Q2. But, if there is a monster drug lurking in J&J's portfolio it's Imbruvica. Imbruvica has already been approved to treat mantle cell lymphoma and chronic lymphocytic leukemia, the most common type of blood cancer in adults, within the past year. Its overall response rate in both indications was phenomenal (earning it the breakthrough designation from the FDA), with Imbruvica-treated patients demonstrating a 78% reduction in risk of disease progression or death in CLL trials, and 66% of Imbruvica-treated MCL patients seeing their cancer shrink or disappear after treatment.  Current annual peak sales estimates for Imbruvica range from $4 billion to $9 billion (though keep in mind the profits are shared with Pharmacyclics), implying it could be a driving force of J&J's portfolio for years to come.

Another reason to be excited about Johnson & Johnson stock is the probable long-term boost it may receive from the implementation of the Affordable Care Act.

If you recall, the Affordable Care Act, which is commonly referred to as Obamacare, helped more than 8 million people enroll health exchanges. For J&J the passage of the Affordable Care Act means offers the possibility that a greater number of insured people, whether through the expansion of Medicaid or merely the purchase of insurance on a marketplace or private platform, will visit their doctor for preventative care. Being able to catch disease and disorder progression early could lead to better quality care for the patient – and a boost in pharmaceutical, medical device, and diagnostic sales for Johnson & Johnson.

Thus far we haven't seen an ACA boost as noted in Johnson and Johnson's conference call. The primary reason is that hospitals, insurers, and even consumers have been cautious with their spending in lieu of the rollout. As time progresses and both consumers and healthcare service providers become accustomed to its changes, I would anticipate the willingness to spend on all ends will shoot higher.

Not to mention, these sweeping healthcare changes come at a time when baby boomers are beginning to retire. This generation of retirees was already set to provide a sizable boost to the device and diagnostic segment. The passage of the ACA should only further enhance this effect.

Finally, consider the positive effects that new drug launches, increasing existing drug sales, the Affordable Care Act, and its stable consumer products division will have on its cash flow and its ability to boost shareholder incentives.

When speaking of Dividend Aristocrats -- those companies which have increased their annual dividend payout for a minimum of 25 straight years -- Johnson & Johnson sits at nearly the top of the list. In April J&J announced a 6% increase to its annual payout, marking the 52nd consecutive year it's boosted its payout. There are few stocks which can claim such a long streak of putting shareholders first as J&J. 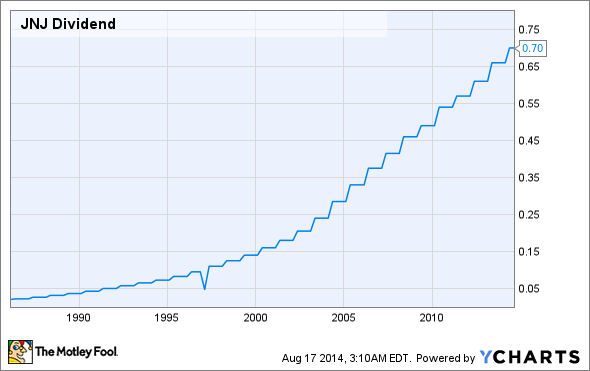 Similarly, Johnson and Johnson, like many big pharma players, has been repurchasing its own shares in an effort to reduce its outstanding share count and boost its EPS to make its stock appear cheaper. Last month the company announced that its board had approved a repurchase plan of up to $5 billion in its common stock, roughly equating to a little less than 2% of its outstanding shares. That may not sound like a lot, but combined with the $7.9 billion it's dishing out in dividends to shareholders each year it puts the company's shareholder-first philosophy in focus.

As both a stabilizing force and a lure for new investors these shareholder incentives seem poised to grow over time, and I believe that more income investors will keep considering J&J for their portfolios -- thereby helping the stock grow.

Who says you can't teach an old dog new tricks? With a number of key drug launches, the stability of existing drugs and consumer product sales, a potential boost in its device and diagnostic division tied to the ACA, and a long history of increasing shareholder incentives, it would appear to me that Johnson & Johnson is finding its sweet spot once again. If these factors continue to align as expected it's quite possible the stock could head even higher.