Las Vegas Sands (NYSE:LVS) has been one of the top-performing stocks in the stock market over the past five years. But with that performance comes high expectations from investors.

We recently saw what the impact of even one data point can be, when Macau said gaming revenue fell 3.6% in July and Las Vegas Sands' stock dropped. Long term, here are the three factors that could send the stock lower.

1. Is Macau's massive VIP Growth Over?

Gaming revenue growth in Macau has driven Las Vegas Sands and other gaming stocks over the past decade, but there's now concern that the days of enormous growth are over. June and July showed declines in gaming revenue year over year, mainly because of a slowdown in VIP play, which was 62% of the market in the first half of 2014. A decline of any kind has been a rarity since the market was opened up to Las Vegas Sands in 2004.

There are valid explanations for the decline, like the World Cup, which kept gamblers from making trips to Macau. But another explanation is a crackdown on corruption in China. Macau has long been seen as a way to launder money out of China, and VIP players have pulled back as the Chinese government began looking into corruption more closely. Long term, I don't think this will stop Macau's growth -- but you can see below that it has made a dent in gaming revenue recently. 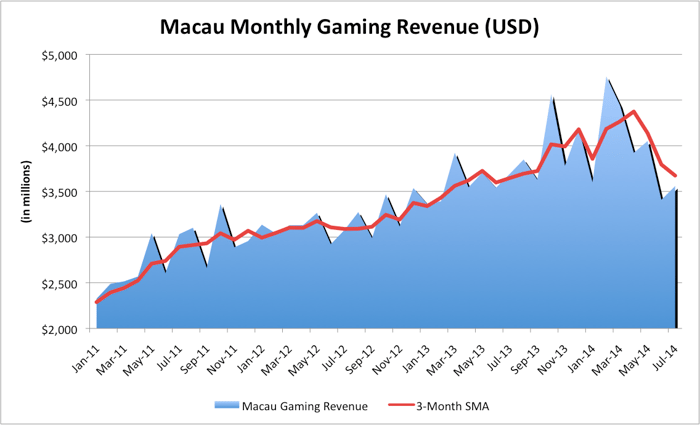 If a corruption crackdown, visa limitations, or even a bad economy impact Macau's gaming revenue negatively, Las Vegas Sands' stock could fall. It would affect other gaming stocks as well, but as the market leader Las Vegas Sands has a lot to lose. Macau accounts for 63.6% of its EBITDA, and the region is growing fastest of the regions it operates in, at 40.2% in the past year alone. 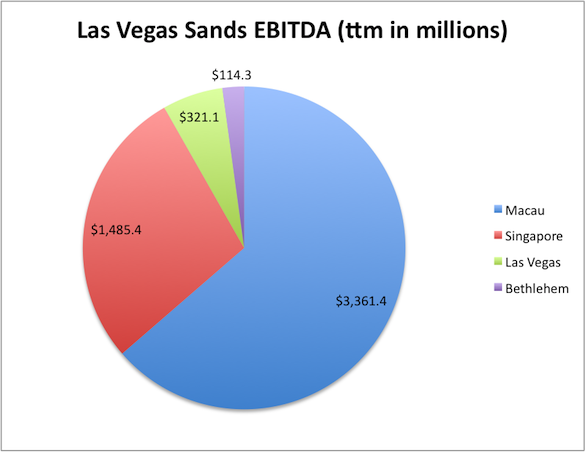 The decline in VIP play, which was 16% sequentially from Q1 to Q2 2014, won't have as direct an impact on Las Vegas Sands as on its competitors because Sands focuses on the mass market on Cotai, but competition for mass market players will increase if VIP play slows. That's the risk for Las Vegas Sands, because with a limited amount of gaming dollars to go around, companies will aggressively adjust to market conditions to win business. So, any slowdown in Macau is a risk to Las Vegas Sands.

One of the strange developments over the past few years has been the performance of Marina Bay Sands in Singapore. The resort is typically one of Las Vegas Sands' most profitable, but results have swung wildly as both play and luck have become volatile. For example, the second quarter saw VIP play drop 27.3%, and mass market play fall 4.9% -- but EBITDA for the resort rose 17.6% as luck swung in the house's favor.

For more information on how VIP and mass market play levels interact with luck, you can find a detailed analysis here, but a casino basically wants VIP play and mass market play to increase over time. On an earnings release, these are measured by "rolling chips" for VIPs, who borrow money and get rolling chips they have to play at the table, and "table game drop", which measures money turned into chips at tables. As long as the volume of play increases, casinos can withstand the volatility in luck because they'll win a predictable amount of each bet over a long period of time.

What investors should be concerned about are gaming trends in Singapore, particularly the decline in VIP play, which could be affected by similar challenges as in Macau. Also, gaming competition is increasing across Asia, and the Singapore government is making it harder for locals to gamble. If gaming revenue drops over the coming years, it would be a big hit to Las Vegas Sands.

The risks I've pointed out above are magnified by the fact that Las Vegas Sands' stock is fairly highly valued right now. The company's enterprise value, which is market cap plus net debt, is now 11.8 times EBITDA, an industry metric for cash flow. That's a high valuation, and I'd like to see that number fall to around eight to 10, especially considering the slow growth Macau is currently seeing. If the eight-to-10 multiple is reached, the stock could fall 17% to 36% even if EBITDA stays flat. That's significant downside from valuation alone.

When you combine operational risk with a high valuation, it can lead to a rapidly falling stock price. Of course, Las Vegas Sands could exceed expectations if Macau returns to growth and Singapore gaming picks up. Investors just need to keep an eye on the trends in Las Vegas Sands' markets, because conditions could change quickly in the highly competitive gaming market.