Berkshire Hathaway (NYSE:BRK.A)(NYSE:BRK.B) doesn't have a conference call where investors can sit and listen to what Warren Buffett and his management team think about the last three months, but a dive into the latest SEC filing reveals five critical things investors need to know.

There may be no elephants, but one business has been actively buying
Many -- including myself -- have wondered what big business, which Buffett affectionately refers to as an "elephant," will be the next big acquisition by Berkshire. And as the days go by, it seems one possible place may be the energy sector through the newly named Berkshire Hathaway Energy (BHE).

What makes me say that? Consider these two quotes:

AltaLink is an electricity transmission business in Canada, and NV Energy is an electric company serving more than 1.2 million customers in Nevada.

With all that in mind, it's becoming clearer Buffett thinks the energy sector is full of opportunities to expand Berkshire's bottom-line profits.

Much has been said about GEICO, but the undeniable fact is the first six months of 2014 has marked another incredible start from GEICO. As you can see, its premiums earned -- the revenue it brings in -- is up more than 40% since 2010: 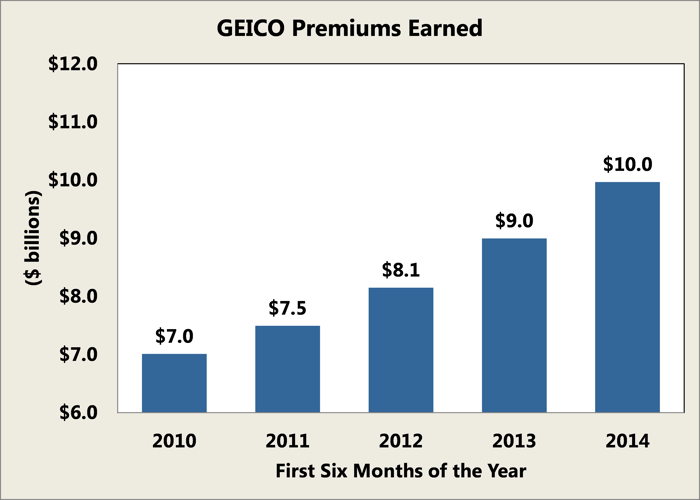 And not only are its premiums earned up 11% over last year, but its losses are down, and so too are its everyday expenses. As a result, through the first six months of the year, GEICO's profits are up 24%, to stand at nearly $750 million.

All of this is to say, GEICO has clearly continued its impressive run.

Diversity isn't everything; it's the only thing
Unsurprisingly, the Service segment of Berkshire Hathaway has had a solid first half of the year, with its profits rising nearly 14% to stand at $605 million. But one thing that must be seen about this business is the wide range of companies that actually make it up:

Our service businesses include NetJets, the world's leading provider of fractional ownership programs for general aviation aircraft and FlightSafety, a provider of high technology training to operators of aircraft. Among the other businesses included in this group are: TTI, a leading electronic components distributor; Business Wire, a leading distributor of corporate news, multimedia and regulatory filings; Dairy Queen, which licenses and services a system of over 6,300 stores that offer prepared dairy treats and food; Buffalo News and the BH Media Group ("BH Media"), which includes the Omaha World-Herald, as well as 29 other daily newspapers and numerous other publications; and businesses that provide management and other services to insurance companies.

I have long applauded the diverse array of businesses of Berkshire Hathaway for the purposes of investors, and this doesn't just come from the broader segments that make it up -- insurance, railroad, utilities, energy, manufacturing, service, retailing, finance, and financial products -- but the businesses within the businesses!

There is perhaps no clearer example of the diversity of Berkshire Hathaway than its Service segment.

Things haven't been great for one business
When discussing the operations of Burlington Northern Santa Fe, Berkshire's railroad, the filing noted:

During the second quarter of 2014, our volumes increased but service levels continued to be well below our internal standards, as well as those expected by our customers. As a result, we continued to experience operating inefficiencies. We are working diligently to promptly address these service issues.

In the business spanning 28 states, the total revenue was up by $576 million, or 5% through the first six months of the year, but thanks to heightened expenses across the board, its net earnings fell by $42 million. It is never encouraging to see gains in revenue be outpaced by expenses.

Although the release notes it is actively working to "expand capacity," in an effort to "improve and maintain service levels," and six difficult months shouldn't be discouraging to investors, the fact remains that BNSF represents nearly 25% of the operating business income at Berkshire, so monitoring its results are undeniably important.

Berkshire is getting bigger and bigger
The highlights of the Manufacturing business of Berkshire, which brought in more than $18 billion in top-line revenue, added an interesting sentence:

All of this is to say, Marmon is no longer shown as an individual business, but instead part of the broader manufacturing operations of Berkshire.

While the exact reason for this isn't noted, it's fascinating to consider that Berkshire feels it isn't essential to disclose the business that brought in more than $3.5 billion in revenue through the first six months of last year.

The results of Marmon are later discussed, but the fact remains, it's seemingly no longer considered to be an essential cog in the Berkshire wheel. This likely isn't the result of its failures, but instead Berkshire's success, as Marmon's size isn't considered "material" to the core results.

We may know Berkshire Hathaway is an enormous company, but instances like this reveal exactly how large it truly is.

The Foolish bottom line
Although investors may not have calls to listen in on or earnings presentations to review at Berkshire, there are undoubtedly important things to learn from the SEC filings it produces. And while Buffett may not have said it himself, 2014 undoubtedly look like it is off to a solid start for Berkshire Hathaway.