On Aug. 6, Transocean (NYSE:RIG) reported earnings that initially appeared very promising with soaring earnings, plummeting tax rates, and higher operating cash flows. However, further analysis shows that Transocean is still a long way off from where it needs to be to complete its turnaround.

Drilling into the numbers
The greatly reduced taxes were due to greater rig idling in high-tax jurisdictions as seen by utilization rate; the rate was suppressed due to Transocean's aging fleet, which is mostly composed of fourth generation rigs. This is compared to younger competitors such as Seadrill (NYSE:SDRL) and Pacific Drilling (NYSE:PACD), whose fleets consist of mostly sixth and seventh generation fleets. 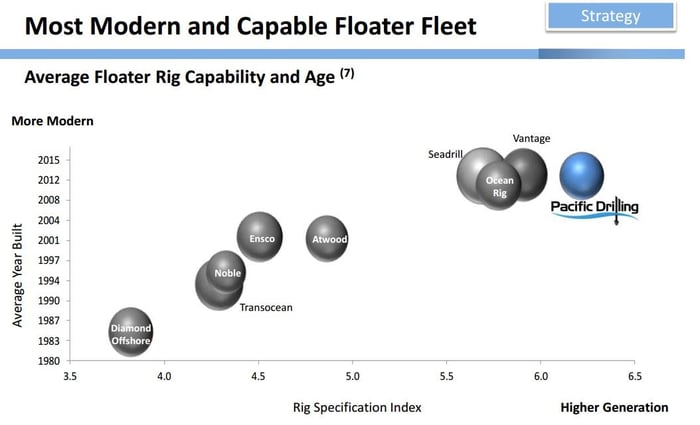 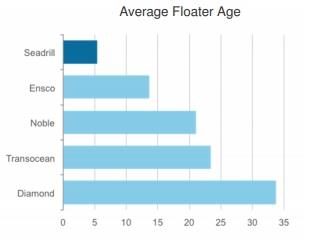 Older rigs, being less technologically advanced and with less modern safety equipment, have far lower utilization rates than more modern rigs. This trend is likely to strengthen since the 2010 Deepwater Horizon oil spill in the Gulf of Mexico in which Transocean settled on a $1.4 billion fine with the Department of Justice for its role in the disaster. 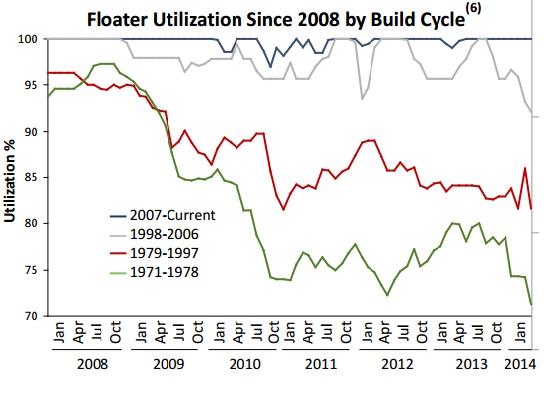 On a related note, the reason Transocean's operating cash flows soared this quarter compared to last is the absence of a $472 million payment made last quarter as part of the above settlement. Similarly, the decrease in capital expenditures compared to last quarter was due to timing of payments for the company's 14 new builds, which are badly needed to modernize the fleet.
Concerns going forward
The 14% decline in Transocean's backlog in the last 18 months is primarily due to the fact that Transocean is facing a major contract expiration cliff. According to the July fleet status report, Transocean has 34 rigs with contracts that expire in 2014, along with three rigs that are idled and eight that are cold-stacked (long-term storage). In 2015 an additional 39 rigs go off contract. 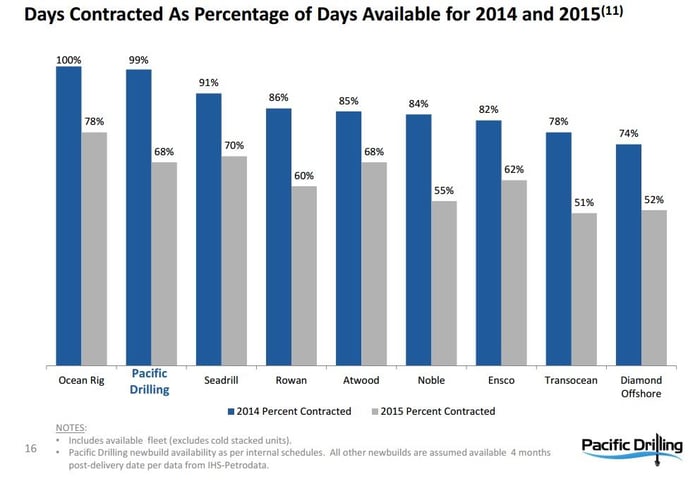 The end result is that Transocean is facing the worst contract cliff in its industry, with just 51% of available rigs contracted through 2015 and at a time when the market for older offshore rigs is rapidly deteriorating. In fact, Deutsche Bank recently downgraded Transocean for these reasons:

...further deterioration in the offshore drilling market as relatively flat demand is met with a relentless surge of new supply. More problematic is the increasing likelihood that a huge chunk of the existing fleet will ultimately become impaired and/ or obsolete...Over 70% of RIG's midwater fleet will come off contract by the end of 2015 in what we expect will be a very soft market for older, midwater assets and thus project weak utilization.

What to watch in the future
There are five key factors investors should closely monitor with Transocean over the next few quarters.
First, is the recently raised dividend, which now yields 7.7%. For a company undergoing such a large and expensive capital investment program and facing a 70% contract cliff, this dividend might prove unsustainable.
Second is new contracts, specifically the duration and day rates. Transocean has been able to obtain contracts for seven of its nine new build UDW drill ships for an average 8.7 year duration and $553,000 per day. However, its enormous fleet of aging, and possibly soon to be obsolete, rigs could weigh on utilization rates going forward -- which is the third key metric to watch.
Fourth and fifth are Transocean's creative financing solutions, specifically its recently announced Caledonia plans and IPOed MLP Transocean Partners.
Caledonia is Transocean's plan to carve out eight North Sea rigs into a separate company and sell them in the second half of the year. The only problem with this plan is that the average age of these rigs is 34 years, meaning that the main benefit from this deal may not be financial but rather simply an elimination of obsolete rigs.
Finally, Transocean Partners, which Transocean owns 70% of, may prove a good financing tool moving forward. Future drop downs of UDW rigs could alleviate cash flow problems, finance future new builds, and secure the dividend.