A dive into the latest results from Discover Financial Services (NYSE:DFS) shows investors that while it delivered record earnings in the second quarter of this year, it could be poised for even greater success into the future.

Powerful results
In the second quarter, Discover announced its earnings per share stood at $1.35, which represented a 13% gain over the $1.20 posted in the second quarter of last year and marked a record quarter for the firm. It also topped the $1.31 expected results from analysts.

Its strong growth resulted from a number of factors, including a sizable 11% gain in its net interest income as well as a 3% reduction in its expenses. However these gains were somewhat offset by the fact its provision for loan losses -- what the company expects to lose on loans -- rose by more than 50% to stand at $360 million.

"Our record earnings per share this quarter reflect outstanding fundamental performance in our Direct Banking segment in terms of loan growth and credit performance," added Discover's chairman and CEO David Nelms, in the earnings announcement. "Our continued focus on gaining wallet share with existing customers and acquiring new accounts with Discover IT drove strong card receivables and sales growth of 6%."

But digging into the details reveals three things investors can learn from the most recent quarter that should provide optimism for the future.

The losses aren't nearly as bad as they seem
If you're anything like me, the fact its provision for loan losses skyrocketed was undeniably a bit troubling. But as the company noted in its presentation on its earnings, this was the result of a "modest reserve build," in the most recent quarter "versus a reserve release," in the second quarter of last year.

Yet putting some numbers to it, in the second quarter of last year, Discover reduced its loan loss reserves in total by $78 million, whereas in the most recent quarter, it grew them by $23 million. This accounting move in turn boosted its profit in the second quarter of last year, but on a comparative basis, made the most recent quarter seem worse than it actually was.

Plus, its reserve rate, which is its total allowance for loan losses over its loans, has actually fallen from 2.72% to 2.56%.

All of this is to say, at first glance, it may seem like its credit quality is deteriorating, but it is actually improving.

NIM is improving
One of the most foundational measures of profit for any bank, or any business within a bank, is its net interest margin. This is the difference between what it collects on loans versus what it pays out on bonds, deposits, and other forms of borrowing.

Discover has seen this number rise over the last year, whereas peer Bank of America (NYSE:BAC) has seen its continue to fall: 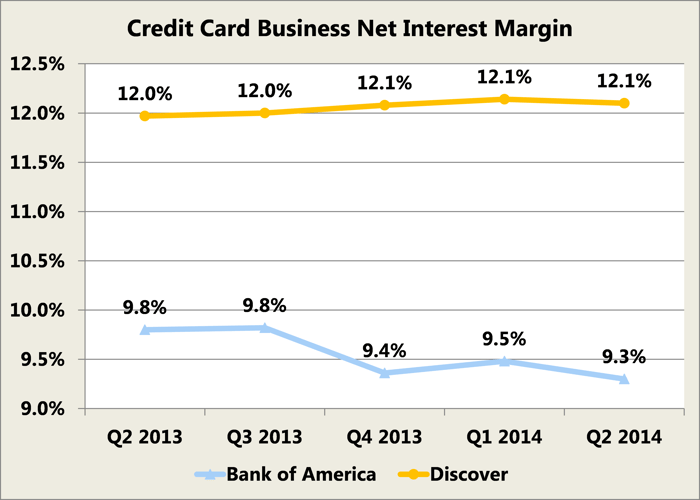 Not only does it consistently earn at a higher rate than Bank of America's credit card business, but it has also kept its margins incredibly stable over the last year.

In fact, for the bank as a whole, Discover watched its net interest margin expand from 9.4% to 9.8%. This is all while banks in total saw their NIM on loans fall by 0.1 percentage point year over year.

The reality that Discover could buck the negative industry trends and outpace its peers in the expansion of its margins is undoubtedly an encouraging result.

Other loans skyrocketing
The final bit of good news from Discover came from the fact its personal loans have grown by a staggering 26% over the last year to stand at $4.6 billion. While this segment represents just a small fraction of what Discover is as a whole -- it has more than $65 billion of total loans -- this growth is a promising sign that its expansion into the lending arena outside of just credit cards is going incredibly well.

It's too early to tell exactly what this could mean for Discover as a whole, but it could add nearly $1 billion in loans without operating a single branch, which could mean its future is incredibly bright.

The Foolish bottom line
One quarter's result almost never represents a reason to buy a stake in a company, and Discover's latest quarter is no exception to that rule. Yet the company delivered impressive results, and the expansion of its profits plus the growth of its business are encouraging signs that point to a bright future.