The lazy days of late summer feel like the ideal time to let things slide until the last minute. But for travelers who want some R&R over Labor Day weekend, waiting to book flights and hotels comes with a price. Travel booking site Expedia, (NASDAQ:EXPE) expects a "considerable increase" in Labor Day travel over last year -- and 2013 was the busiest Labor Day since the 2008 recession, according to AAA.

All of this is great news for hotels, car rental companies, and airlines, but not so great for those of us who haven't already booked our trips. If you're still pulling together your travel plans, here's what you need to know.

Airfares are up, and flights are filling up fast anyway

Travelocity says fares have risen more than 6% this year, and Expedia says demand for Labor Day weekend flights is up 20% over last year. Forget about scoring cheap getaway deals to popular Labor Day destinations like Las Vegas, Chicago, and New York. For example, Southwest Airlines roundtrip Austin-Las Vegas fares for Labor Day weekend are running more than $900 for a Friday evening departure and Monday evening return--on the flights that aren't already sold out.

If you can add a day to your getaway, you can make a substantial dent in the cost of your airfare. For example, that Southwest roundtrip fare comes in more than $200 cheaper with the return flight on the Tuesday after Labor Day.

Gas prices are down, for now

AAA says fuel costs have been dropping this summer and are lower overall than last year. And according to Expedia, car rental rates are actually a bit lower this Labor Day than last year despite rising demand. Motorists can expect a bump in gas prices right before Labor Day weekend, but if your vacation destination is close enough to drive, you're in luck when it comes to fuel and rental costs. 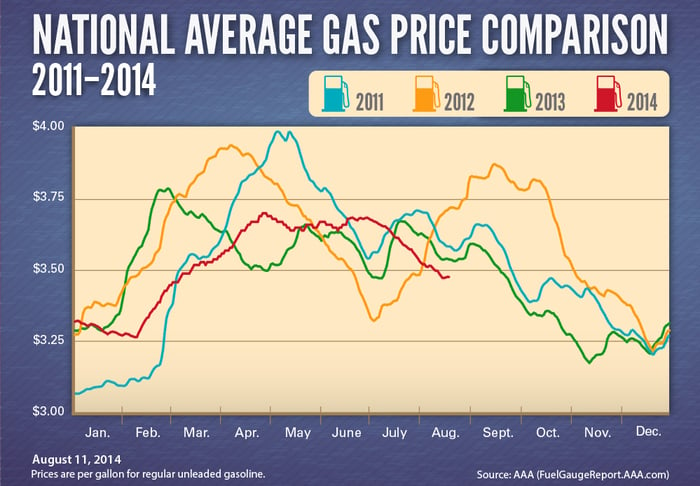 Traffic will almost certainly be another story. Last year, an estimated 29 million drivers hit the highway over Labor Day weekend, most of them leaving Friday and returning on Monday. And of course more motorists are expected to get out of town this year. If you find yourself gridlocked, you can entertain yourself or teach the kids about civic participation by pinging your elected officials with the I'm Stuck app.

Room rates are up

However you get to your Labor Day destination, you'll almost certainly pay more than last year for your hotel stay. Expedia says hotel room demand is up 30% for this year's holiday, and rising rates have pushed the average cost of a night's stay to more than $180. Expedia and Travelocity both recommend booking flights and hotels together for better deals.

The hottest deals are (mostly) in hot locations

For late-planning travelers who don't mind heat, humidity, or both, Expedia's list of the 8 best bargain destinations is worth a look. Palm Springs, Austin, and New Orleans all make the list, as do the Atlantic coastal cities of Virginia Beach; Washington, DC; Charleston, South Carolina; and Ocean City, Maryland.

Travelocity recommends Orlando, another famously warm and muggy spot, for smaller crowds and shorter lines at the city's theme parks, thanks to the fact that many kids are already back in class for the new school year.

Not all the bargain destinations require a handheld fan and a sun hat. Denver is the only mountain-country destination on Expedia's good-deal list, and Travelocity senior editor Courtney Scott recommends ski destinations like Vail for upscale lodging and outdoor activities.

The travel industry's recovery from the recession has been outpacing the economy as a whole, and the rise in demand for flights, cars, and hotel rooms is a positive sign, despite the extra cost to last-minute travelers. It's also a wake-up call to travelers who've gotten used to snapping up last-minute deals -- lazy days of summer or not, it's time to start planning ahead again.