Please ensure Javascript is enabled for purposes of website accessibility
Log In Help Join The Motley Fool
Free Article Join Over 1 Million Premium Members And Get More In-Depth Stock Guidance and Research
By Chris Neiger - Aug 19, 2014 at 11:00AM

BlackBerry's Passport is yet another signal that the company's future lies in the hands of its bread and butter users.

It's time to get down to business. Source: BlackBerry.

Let's look past the Passport's square shape for a moment. Sure, it's the most noticeable feature on BlackBerry's (BB 7.08%) newest device, but it's more important to focus on why the device takes this shape.

The company's CEO, John Chen, is in the middle of turning around the company, and for BlackBerry that means refocusing on enterprise customers -- and the Passport is the physical representation of that strategy.

Why Blackberry needs to be different
It's easy to think the Passport's boxy design is just to differentiate itself from the masses of iPhones and Android phones on the market. The device features a 4.5-inch square screen with a 1,400 x 1,400 pixel display, and a recent partnership with Amazon.com ensures a ton of Android apps will run on the device.

But at the heart of the Passport is BlackBerry's attempt to lure back its core customer base, which has always been the enterprise sector. The display size offers a wider view of documents and the large physical Qwerty keyboard allows for easy typing. Even the Passport's name evokes a business persona. And that's a good thing. Chen has said that 80% of the company's mobile subscribers are business users.

But BlackBerry's faced headwinds in the enterprise market lately, as Apple's (AAPL 2.45%) made some huge gains in the business world. A recent report from Good Technology showed the iPhone far outpaces enterprise sector activations in the second quarter compared to Android and Microsoft's Windows Phone. 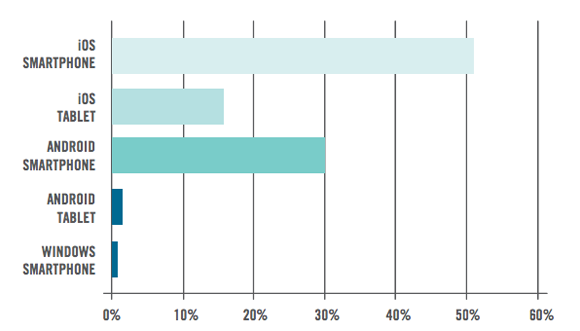 It's worth noting that BlackBerry was excluded from the data because Good Technology doesn't have access to net enterprise activations on BB10 devices through its services.

On top of Apple's gains, the company's latest partnership with IBM should help push its enterprise mobile sales even higher, leaving BlackBerry even further behind.

Vision and execution
BlackBerry knows one of its only plays in the mobile handset space is to double down on enterprise. That's one of the reasons why it purchased the German-based voice and data encryption company, Secusmart, last month. The company brings mobile and landline security to business and governments and it could help BlackBerry set itself apart from Andorid and iPhone in the sector.

Chen's management seems to be turning around some aspects of the company though, even if just a little. Adjusted operating expenses decreased 57% year over year, helping BlackBerry post a profit of $23 million in its 2015 fiscal first quarter.

But much of BlackBerry's cost-cutting measures are complete, and now it's time to boost sales -- in Q1 revenue fell 69%, to $966 million. Hardware sales, including handsets, will be a big part of this. In the most recent quarter, hardware sales made up 39% of the company's revenue.

Though the Passport could prove to be a smart move in winning back enterprise users, or at least holding on to current ones, we have to be realistic about BlackBerry's current position.

Just last week IDC released its latest smartphone vendor data, and BlackBerry's struggling even more than before. In Q2 2013, the company had 2.8% worldwide smartphone market share. But in Q2 2014 that fell to just 0.5%.

The company can't continue to experience drops like this in the worldwide market, battle Apple in the enterprise sector, and still have a fighting chance in selling lots of mobile handsets. So while the Passport shows BlackBerry is committed to its future with business users, we'll have to wait until the device launches next month to see if the feeling's mutual.