American International Group's (NYSE:AIG) story is one that pre-financial crisis investors would prefer forget. The company practically committed suicide by insuring risky mortgages, then survived on a federal bailout.

However, since repaying the government and relisting as a public company under soon-to-depart CEO Bob Benmosche, AIG has transformed itself, growing stronger by becoming smaller.

At the current price, AIG shares could have further room to run. Here are three reasons why AIG stock might rise:

1. It's getting back to the core business of insurance
AIG has reshaped itself by selling off its noncore businesses. In 2010, it sold American Life Insurance Co. to MetLife (NYSE:MET) In 2012, it ditched $2 billion in AIA Group (OTC:AAIG.F) stock. And this year, AIG divested its aircraft leasing arm, International Lease Finance Corp., or ILFC, to rival AerCap Holdings (NYSE:AER).

These moves have helped AIG refocus on what it can do best: underwrite profitable property and casualty, life, and mortgage insurance.

Selling ILFC was particularly noteworthy. The deal allowed AIG to move volatile aircraft leases off its balance sheet, collect more than $3 billion in cash, and walk away with a 46% stake in the acquirer. Now AIG stands to profit to the tune of $97.6 million for every $1 increase in AerCap shares without carrying any of the leases on its own balance sheet -- not bad!

But it gets better. Benmosche said he "expect[s] to improve our credit ratings," partially due to the credit agencies' improved opinion on the "new" AIG, which no longer carries billions in aircraft leases on the side. Only one noncore business -- the direct investment book -- remains, but it should wind down naturally by the end of the decade.

2. Shares are backed by a boatload of book value
At roughly $54, AIG stock trades at a nearly 30% discount to its last-reported book value of $75.71 per share. A reversion to book value gives the shares 40% upside.

So how does AIG get back to book value? The simple answer is by generating a 10% (or better) return on equity once again.

AIG's management has targeted a 10% ROE as an intermediate goal. So far, the company has struggled to meet investor expectations. Low interest rates have dampened investment returns on its float. Meanwhile, a competitive pricing environment for insurers leaves AIG to underwrite at prices nearing breakeven (this quarter, AIG noted that pricing growth in its commercial lines had stalled). Still, the company's combined ratio sat at 98.8% in its property and casualty division on a calendar-year basis. 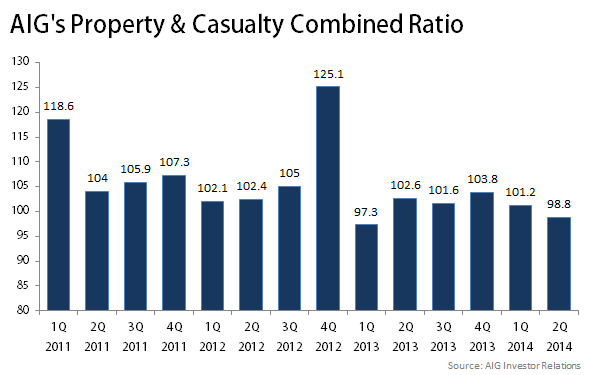 Continued improvement in the core P&C business could be the sole driver pushing AIG back to the days of consistent double-digit ROEs. It won't be easy, but investors should take solace in the fact that the P&C division's former president, Peter Hancock, will take the helm as CEO on Sept. 1. Improving the P&C business should remain a top focus.

3. Buybacks should sustain book value growth
Perhaps the biggest driver for the stock will come from continued repurchases. In the last year, AIG has signed off on roughly $4 billion in share buybacks, snapping up shares quickly after announcing its intentions. That policy will likely continue -- and possibly accelerate -- now that the company has sold ILFC and has ample capital to repurchase shares below book.

Share repurchases at current prices make sense. Rather than deploy capital into breakeven insurance policies, AIG can effectively buy $75 of book value for $54 on the open market. Book value per share grows with each share purchased, and in doing so, AIG removes the temptation of writing unprofitable lines.

Consider repurchases as a defense against slow and steady improvements in its core business. Though AIG may continue to fall flat against its goal of a 10% return on shareholder equity, repurchasing stock at a discount allows book value per share to grow, even if operating improvements are slow to develop.