It's not official but the online video leader appears close to launching its long-rumored paid-streaming service.

Google's (GOOG -0.49%) (GOOGL -0.55%) YouTube brand has been a dominant force in online video and has become a major player in the music industry by functioning as essentially a modern version of MTV. Pretty much every music video ever made is available on the service for free, and now the company appears ready to leverage that content to launch a subscription music service.

The new offering, called YouTube Music Key, has been rumored for months. Google won't confirm its existence (though YouTube's CEO has talked about it in the past), but the blog Android Police posted a number of screenshots earlier this week showing how it would work. YTMK would, the pictures suggest, cost $9.99 a month and it would include access to the site's 20-million-song catalog, roughly the same size as that of soon-to-be competitors Spotify and Rdio. YTMK would also offer playlists and a collection of material the pictures of the app refer to as "concerts, covers, and remixes."

The move may make sense for YouTube but it puts the company in a crowded space where the established leaders Spotify and Pandora Media (P) actually lose more money with each new subscriber they add. The streaming music market also includes Amazon (AMZN -1.08%), which has its limited but free for Amazon Prime members service Amazon Prime Music, and Apple (AAPL -0.91%), which offers the free iTunes Radio as well as recent acquisition Beats Music, a paid service which sells for $9.99 a month.

The YTMK app will allow users to play music on their mobile phones, according to the screenshots, "with or without video, in the background, or with your screen off" -- all things that the single-tasking YouTube apps could not previously do. Subscribers will also be able to play music via "YouTube Mix," which works similarly to radio stations on other streaming services.

YouTube has become a major player in the music industry and it has the leverage to make deals for unique content, along with its deep catalog, but whether customers want yet another paid music service is a huge question.

Why is YouTube doing this?
YouTube CEO Susan Wojcicki has only held her job since February, but she made it very clear in an interview earlier this month with Re/Code that monetizing beyond traditional ads is important to her. That's an interesting perspective for an executive whose previous position was serving as senior vice president of advertising for Google.

Music is a really important part of the YouTube experience. Subscription allows us to make that experience richer in a bunch of different ways. Right now, YouTube is ad-supported, and if you look at most media, you'll see that it's ad-supported and subscription-based: Newspapers, magazines, cable TV. So there are places where subscription makes sense, because you're able to offer things to some users that you otherwise just couldn't offer.

Those comments beg the question, what exactly will YTMK offer that customers can't find on other music services? YouTube has access to a ton of music -- including a huge number of emerging artists, an area where Pandora and Spotify have struggled, but it's unlikely that a lot of people are going to pony up $9.99 a month to hear bands and singers they don't know. Special concerts and bonus content also seem like a weak draw. YTMK will reportedly let people watch YouTube's music content without ads. That might lure in some of the brand's heaviest existing users, but most people won't pay $9.99 a month just to not watch an ad every now and then.

YTMK is something YouTube can deliver and its position of strength with the music labels should give it access to some unique content, but getting customers to not only sign up but switch from one of the many competing services makes its prospects highly doubtful.

Why do Pandora and Spotify struggle?
The challenge for anyone entering the streaming music market is actually making money. Amazon is not looking to turn a profit on Prime Music -- the goal of the service is to keep customers paying for the Prime delivery service -- but for everyone else, the goal is driving revenue. Spotify and Pandora may be industry leaders, but they have not figured out how to build their businesses into profitability.

As Pandora  and Spotify have grown in popularity they actually lose more money. Both companies significantly raised their revenue in 2013 while also growing their losses, as detailed on the chart below. 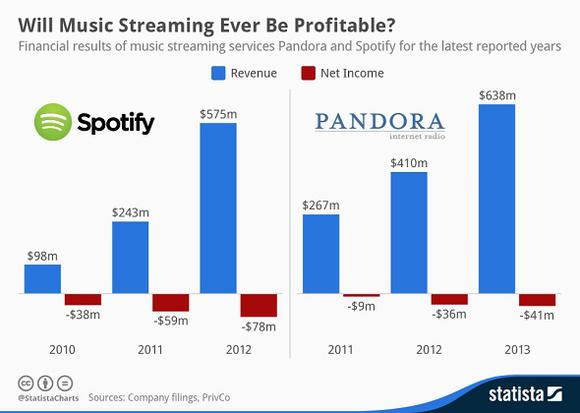 More people are signed up, more money is coming in, and losses keep growing. It's not a question of scale. Pandora and Spotify can't grow their way into making money.

A report published by Generator Research last year concluded that the streaming business in its current state was "inherently unprofitable" and that "no current music subscription service -- including marquee brands like Pandora, Spotify, and Rhapsody -- can ever be profitable, even if they execute perfectly."

The numbers back that up and it certainly makes you wonder why YouTube would enter a space where the top players lose money.

Is YouTube making a mistake?
YTMK seems like a very challenging play because it will be hard to get people to sign up and because if they do, that may lead to higher losses. YouTube, however, does have some advantages Spotify, Pandora, and the others (aside from Apple) don't. The company already has a huge infrastructure that supports over a billion users a month in a very profitable ad-supported business. Adding a subscription service on top of that is much less costly than building and maintaining one solely to support a paid streaming service.

YouTube also has leverage with the major music labels that Spotify and Pandora do not. While neither company shares the details of its deals with record labels, Spotify CEO Daniel Ek once said that his company paid 70% of its income back to the music industry. That's a very thin margin to operate on and leaves little room for profit.

YouTube, like Apple, might be able to negotiate better deals, but with artists already complaining about their piece of the pie, the label agreements won't be that much better.

With YTMK YouTube is entering a crowded space where customer acquisition is likely to be difficult and the upside appears to be minimal at best. That seems like a poor choice for a new CEO and an odd way to grow YouTube.