Please ensure Javascript is enabled for purposes of website accessibility
Log In Help Join The Motley Fool
Free Article Join Over 1 Million Premium Members And Get More In-Depth Stock Guidance and Research
By Brian Stoffel - Aug 23, 2014 at 10:00AM

Thinking of having a baby? You'd better be ready to fork over a quarter-million dollars.

At least, that's what a recent USDA report says about the costs of raising a child. Specifically, if you're a middle-income, two-parent family, the average cost to raise a child born in 2013 will reach $245,340. 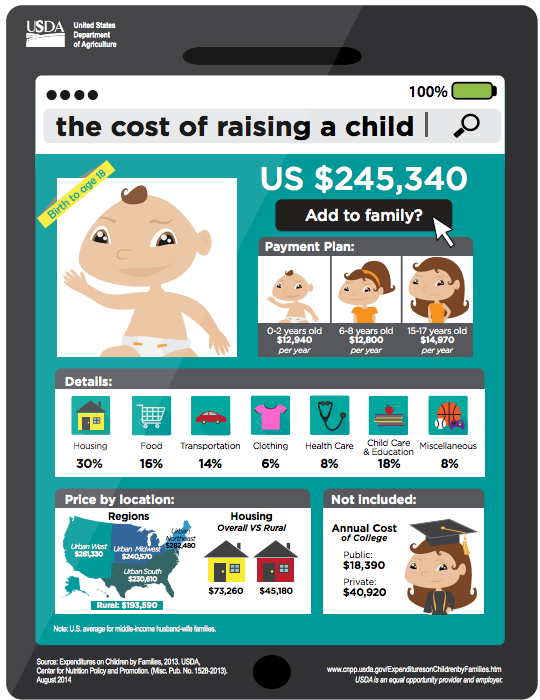 Being a first-time father myself, I couldn't help but gulp when I saw the figure. But, as with many things, the devil is in the details. Read on to learn three key factors that go into calculating this number that you'll miss if you only read the headline.

A portion of your mortgage principle is included in the price
It stands to reason that as your family gets larger, you'll need more space for all of them to live in (relative) harmony. Intuitively, however, I don't think many people think of their mortgage as part of "the costs to raise a child."

The USDA, however, includes that in their considerations. I actually don't have a problem with that. Housing is by far one of the largest expenses we'll ever have in our lives, and having children will mean spending more on housing.

But if you've compartmentalized your mortgage -- as well as utilities and furniture -- into a distinct category separate from child rearing, then you can safely shave 30% off of the "costs to raise a child." This would bring overall costs to around $171,700. 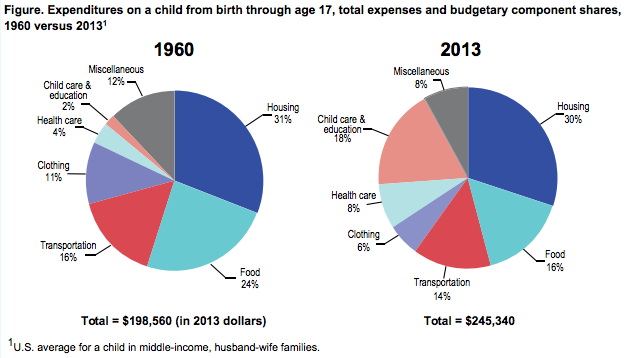 In fact, the rise in this one category accounts for over 85% of the growth in the costs to raise a child between 1960 and 2013.

Have things really changed that much?

In some ways, they have, but there's been a significant change in methodology as well. Back in 1960, if a family spent nothing on child care or education -- presumably with a parent staying home and kids attending public school -- they were included in the calculation.

Today, that's not the case. As the USDA mentions: "To be more applicable to families, this update included only those families with [child care/education] expense[s]." That's an important omission, because "About half of all households reported no expenditure [for child care/education]." For middle-income, two-parent families, 55% of those surveyed in 2013 did not report this expenditure.

Again, I have no problem with this method -- especially because the report goes into great detail explaining how numbers were reached, and because it's always prudent to overestimate costs.

That being said, if all respondents were included, the average costs of raising a child would be $24,300 lower. And if you are a family that doesn't have this expense at all, you could cut the full $44,200.

Overall, those families that don't count "housing" as part of child rearing and don't spend money on child care or education might be rejoicing: Their overall costs have dipped down to $127,500.

College costs not included
As the USDA makes clear in its infograph above, the cost of college is not included in this figure. When the annual costs of public school run $18,390 per year -- and private schools clock in at $40,920 -- that can be considered a major omission.

Of course, there are lots of ways to cut the costs of college. Fellow Fool Morgan Housel has a great plan you can read about here. Basically, he encourages students to go to community college and live at home for the first two years, and then transfer to a state school to get their bachelor's degree -- working the whole way through. This would make overall costs significantly lower.

Overall, it's important to know that while the USDA's numbers are great for spotting societal trends, they can't be blindly applied to every situation. The study is a great starting point for considering all of the costs of raising a child. But in the end, there's a lot of wiggle room for families worried about such sky-high price tags.