Heaping portions are the hallmark of seemingly every Italian restaurant. Photo source: SXC.hu.

What's not to like about Italian food? Heaping bowls of pasta, hearty sauces, zesty cheeses -- it's ultimately good comfort food to sate your appetite, which likely explains why Italian restaurants remain a popular dining experience today.

Yet it can also be overdone. Burying a dish in sauce or hiding its flavor under a mountain of cheese is a culinary high crime.

A real spaghetti western
So to separate the top chefs from the greasy-spoon cooks, the folks at Market Force Information surveyed the opinions of 6,100 consumers in the U.S. and Canada on their favorite full-service Italian restaurant, rating the biggest chains on food quality, atmosphere, friendly service, value, variety, and kid-friendliness.

So which Italian eatery gets it right?

As the Olive Garden tag line said, "When you're here, you're family," and all the chains surveyed bunched up together when it came to friendly service, suggesting to the researchers there was little differentiation between the chains in that aspect.

But when you go out to eat, it's what you put in your mouth that counts most, and that's what separated the best from the rest here. Two restaurants tied on their food quality, forcing the researchers to use their respective ambiance to declare an overall winner. Good food, good surroundings: Sounds like a recipe for success.

So knowing those were the determining factors for which restaurant made the cut, what's your best guess for the top full-service Italian restaurant?

Bigger doesn't mean better
If Olive Garden was your first choice, don't worry: As the largest Italian restaurant chain (837 restaurants in the U.S. and Canada), the Darden Restaurants (NYSE:DRI) concept is often the first introduction consumers have to a big Italian restaurant with mass appeal. But it actually placed fourth out of the list of five restaurants considered, beating out only East Side Mario's, a privately held Canadian chain of over 100 restaurants, which excelled when it came to value and being kid-friendly, but received low marks when it came to food quality.

Those two were separated by a relatively broad margin from the top three chains, which clustered at the top of the rankings. Filling in the second- and third-place spots were Bloomin' Brands' (NASDAQ:BLMN) Carrabba's Italian Grill and Ignite Restaurant Group's (NASDAQ: IRG) Romano's Macaroni Grill, respectively.

Carrabba's, which tied with the leader in food quality, also stood out for the variety found in its menu. Romano's, on the other hand, simply placed well across the board without standing out in any one category.

So, did you guess Maggiano's Little Italy as the best full-service Italian restaurant?

Big things come in small packages
The Brinker International (NYSE:EAT) chain is actually the smallest one of the bunch, with just 46 restaurants as of the end of June, but it packs a big punch with its food quality and atmosphere, which tries to transport its guests back to a classic, 1940s-style Italian-American restaurant in New York's Little Italy. 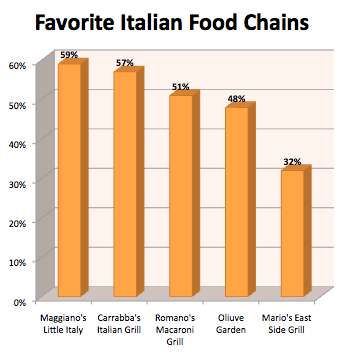 Although Brinker doesn't break out the margins Maggiano's contributes, it's clear the Italian eatery is a big driver of profit despite its small size.

Compared to its other chain, Chili's, which generated average revenue per meal of almost $14 per person, including alcoholic beverages, Maggiano's nearly doubled that with nearly $26.72 per person, while nearly tripling the average annual sales volume per restaurant with $8.81 million in revenue (Chili's generated just $3 million per restaurant).

That's a spicy meatball!
Although there's an Italian restaurant for every palate and every pocketbook, according to the market watchers at Statista, the number of people visiting Italian restaurants for dinner in any 30-day period has actually been on a fairly steady decline for the past few years, falling from 48.3 million in autumn 2009 down to 39.3 million in spring 2013.

That's borne out by the lack of growth currently being witnessed at some of the biggest full-service Italian eateries, almost all of which have seen steady declines in same-restaurant sales over the past year or more. Just during the first two quarters of 2014, three of the four top names have witnessed a drop in comps, and they can no longer blame it on the weather. 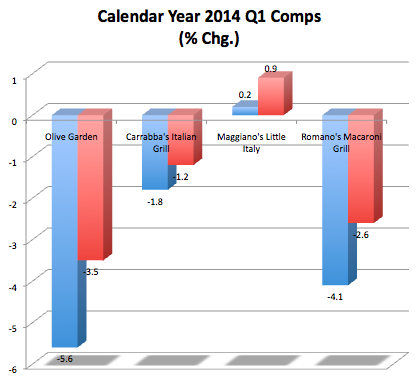 Most diners aren't pulling up a seat to the Italian restaurant table. Data: SEC filings.

Considering the survey results on patrons' favorite chains, it's perhaps not so surprising that Maggiano's is the only one recording gains. In fact, it's turned in 18 straight quarters of comps growth. But the dwindling number of diners visiting Italian restaurants doesn't bode well for Darden, which is making its Olive Garden chain the cornerstone of its turnaround strategy.

Having sold off its Red Lobster seafood restaurant last month, Darden believes it will be Olive Garden that will become a growth concept again, but looking at those comps numbers above, it's not surprising that Darden's activist investors wanted it sold off with Red Lobster, too.

The restaurant industry as a whole is facing a tough economic environment, and casual-dining chains are also feeling the pinch. Yet even as diners slowly swear off Italian food, perhaps on broader health concerns that all that pasta only serves to pack on the pounds, Brinker International continues to serve up growth with this little slice of Italy.

Believe It or Not, This Is The Most Popular Italian Restaurant Chain @themotleyfool #stocks $EAT $BLMN $DRI Next Article
Current