The investment thesis for Chevron is just about the same as for every other integrated oil and gas company: Oil and gas are commodities we need on a daily basis, and these companies all produce loads of the stuff. If you are investing in this space, which one of these very similar companies should you choose? To help you decide whether Chevron should be your choice, let's look at how it stacks up against its peers when it comes to operations and stock valuation.

Chevron's case that it's the best of the bunch

Describing why Chevron should be considered the best investment in the integrated oil and gas space can be summed up in one phrase: It's the oil, stupid!

Even given the billions of dollars of assets dedicated to refining, pipelines, and retail gas stations, earnings for these behemoth energy companies are almost exclusively driven by the production side of the business. Furthermore, it's a bit of a no-brainer that oil is more valuable on the open market than natural gas. Sure, there are some regional price disparities, and lots of gas is sold at an oil-indexed price, but the average return on a barrel of oil is considerably higher than that for an equivalent amount of natural gas.

Consider this: Of all the integrated oil and gas players out there, Chevron has the highest percentage of oil production and the greatest amount of earnings related to oil production.

Chevron's standing has a trickle-down effect on all of the company's financials. On a per barrel of oil equivalent basis, Chevron has the best price realizations, 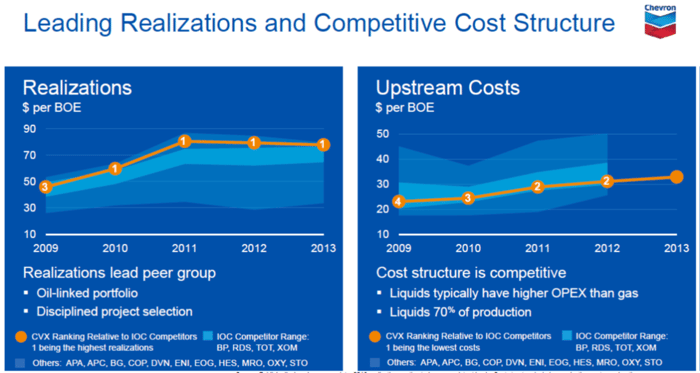 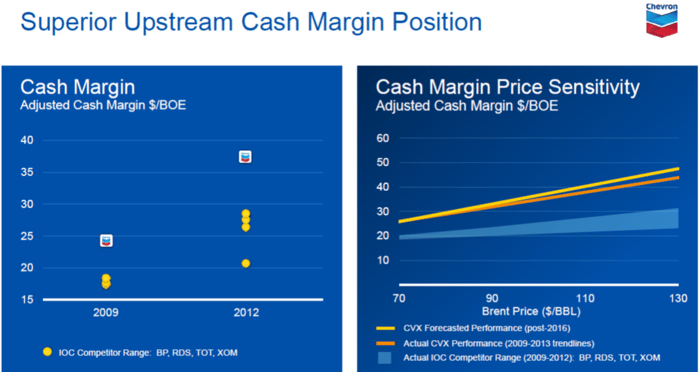 and the best earnings and return on capital employed for its upstream operations. 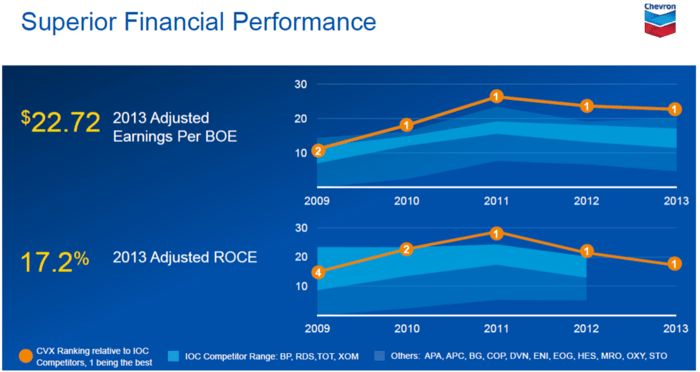 Another aspect that might make Chevron look appealing today is its large quiver of projects that should increase production over the next couple years. This is a stark contrast to BP and Royal Dutch Shell, which are both divesting some of their less attractive assets to achieve higher per-barrel profitability before they start to grow production again. Over 40% of Chevron's employed capital is considered pre-productive because it is tied up in assets not yet producing. As these large-investment projects come online over the next couple years Chevron should see some significant jumps in production and earnings.

While there is plenty of room for integrated oil and gas companies to grow in coming years, this remains a cyclical business that is extremely sensitive to swings in oil and gas prices. For companies with production numbers as large as Chevron, a $1 change in the price for Brent crude -- the international benchmark -- can mean hundreds of millions of dollars in earnings and cash flow. This relationship with commodity prices means integrated oil and gas players trade at a pretty significant discount to the broader market. Although the Robert Shiller P/E ratio for the S&P 500 stands at about 26, the Shiller P/E for the energy sector is at a much lower 15.9.

This is important to keep in mind when looking at Chevron, because its valuation -- along with the valuation of every integrated oil and gas player -- is at a very significant discount to the broader market.

So are Chevron and the others trading at a huge discount even to the broader energy sector, and is everyone undervaluing these companies? Based on Chevron's historical valuation, probably not. Comparing Chevron's current valuation with its average valuation over the past 10 years, it's now a little more expensive, but not really enough to write home about.

The argument could be made that a slight premium is in place because of the large amount of production slated to come online in the next couple years. But it's up to you as the investor to decide if that it is worth the little extra valuation.

Big oil companies such as Chevron are not for day traders or for the faint of heart who will sell shares at the first whiff of declining oil prices. If you want to own shares of Chevron, be ready for the long haul and have the temperament to resist making rash decisions in the event of oil price swings. One reason Chevron is such a compelling investment is that it has a dividend yield of 3.4% and is getting in the habit of routinely buying back stock to juice per-share returns. You can use that to your advantage by sitting on the stock for many years and directly reinvesting the dividends. That is one large reason why the company's stock has more than doubled the S&P 500 over the past decade on a total return basis. 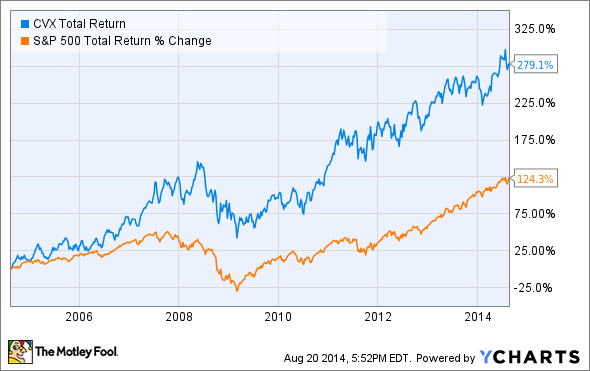 Remember, though, that Chevron's shares are trading at a small premium to its historical average, so this very moment may not be the most opportune time to buy the stock. However, it's up to each investor individually to decide whether the increase in production is worth the premium. Personally, I will probably not buy shares in the foreseeable future, but I do have some cash reserves built up in the event that Wall Street does something stupid.