After months of speculation that Google's (NASDAQ:GOOG)(NASDAQ:GOOGL) YouTube division was preparing to acquire Twitch, the video game streaming site has now been sold -- except to Amazon.com (NASDAQ:AMZN).

Amazon is paying $970 million, which is the approximate amount that Google was rumored to be considering. The Wall Street Journal confirms that Google was indeed in talks to acquire Twitch, but that negotiations "cooled" recently.

The idea of Google acquiring Twitch made perfect sense, given how incredibly engaged Twitch users are (the average user watched nearly 2 hours per day in 2013) and the lucrative implications that would have had on Google's advertising business.

Why would Twitch want Amazon?
So why did Twitch decide to sell to Amazon? CEO Emmett Shear says that it's because Amazon believes in the Twitch community and shares the same long-term vision. At the same time, Twitch will maintain operational independence.

Streaming high-definition video live to users all over the world is very capital intensive since it requires a lot of backend infrastructure to do the heavy lifting. Late last year, Twitch raised $20 million in funding, which was predominantly spent on infrastructure expansion. Getting sold to a larger company with deep pockets that also happens to be the dominant Infrastructure-as-a-Service vendor makes plenty of sense.

Why would Amazon want Twitch?
Compared to competing offerings like Apple TV and Roku, Amazon needs something to set its Fire TV set-top box apart. One point of differentiation with Fire TV is support for mobile gaming.

Amazon sells a first-party controller for an extra $40, while Amazon's game-making subsidiary Amazon Game Studios even released its first title, Sev Zero, at the same time as Fire TV as an exclusive. Since Amazon's ecosystem is just a forked version of Android, Fire TV was able to hit the ground running with an existing library of games available. It's conceivable that Amazon may eventually integrate Twitch's streaming technology into Fire TV, although there could be some possible hardware limitations.

Twitch is primarily an ad-supported business (it also offers an ad-free version with extra perks for a $9 per month subscription fee), which at first doesn't appear to be a natural fit with Amazon's core e-commerce business, but ...

There's an ad for that
It just so happens that Amazon has been reportedly building a new ad network. Just last week, The Wall Street Journal detailed Amazon's ambitions for a new ad placement platform called Amazon Sponsored Links. The new network would be similar to Google AdWords, which targets specific keywords within search queries to drive relevance. Google currently serves up the majority of the ads displayed on Amazon's site.

Amazon does already have a small side business selling ads. Advertising services are included in the company's "other" revenue. This segment has been marching higher for many quarters, although most of this growth is coming from its Amazon Web Services division, which is also included in "other" revenue. 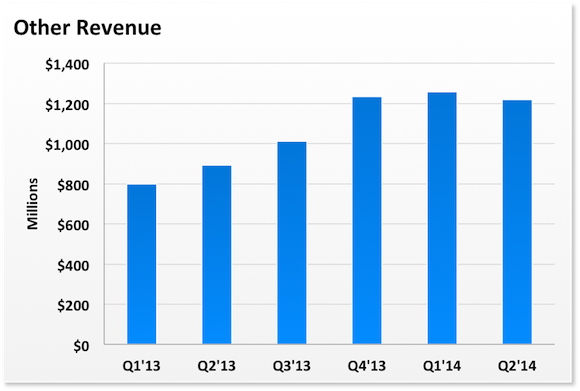 Third-party researcher eMarket estimates that Amazon will sell $1 billion worth of ads in 2014, before factoring in any implications of the Twitch acquisition. That would be just about 1% of the $91 billion in revenue that analysts expect Amazon to bring in this year. That total in ad sales may not compare to Google's ad business, but Amazon still generates more ad revenue than companies like Twitter and LinkedIn.

Amazon has a unique perspective on the purchasing habits of its 250 million active users, one that data-centric ad giants like Google and Facebook would have trouble replicating. Google may dominate search ads while Facebook remains the leader in social ads, but Amazon has an opportunity to delivery highly relevant e-commerce ads since it has unparalleled purchasing data on its users.

In February, Amazon partnered with video ad platform FreeWheel in order to grow its video ad business in numerous ways. A month later, Comcast acquired FreeWheel for $360 million. Clearly, Amazon has a multi-faceted strategy for growing its ad business, and Twitch is just the latest development.

Foolish bottom line
Advertising is also a much more profitable business than selling every imaginable physical item known to man. Google's 24.9% operating margin is quite a bit higher than Amazon's 0.75% operating margin. Amazon is notorious for funneling profits from mature businesses to finance expansion into new markets. To the extent that Amazon can grow its overall advertising business, the profits can help pave the way for new products and services.

Just three years young, Twitch was supposedly profitable in 2012, but not in 2013 as it invested heavily in a new headquarters in San Francisco while growing its ad sales team. But Amazon can potentially realize synergies from the acquisition since it already has expansive cloud infrastructure in place. Twitch could become a very valuable component of Amazon's broader advertising strategy.