Apple's (NASDAQ:AAPL) mythical jumbo iPad may soon see the light of day. Rumors of a 12.9-inch iPad had surfaced late last year, for possible inclusion in the company's fall product cycle in the latter half of 2014. Then, a reputable analyst with a good track record issued a research note that the device likely wouldn't be launched in 2014.

Now, Bloomberg reports that Apple is indeed gearing up for a launch, entering mass production in the first quarter of 2015. Here's why investors should get excited. 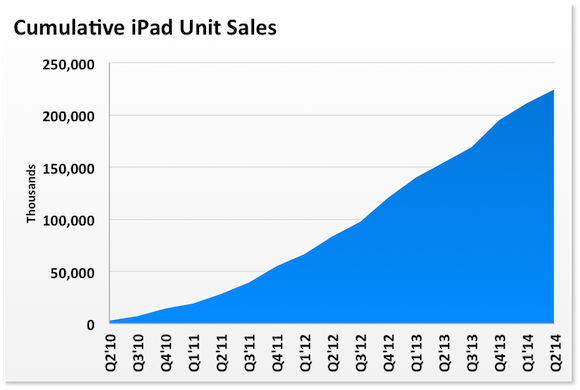 While iPad unit sales, as well as global tablet volumes, have decelerated in recent quarters, the long-term outlook for tablets remains healthy. Regarding the current state of the tablet market, Tim Cook recently told Walt Mossberg, "I'd call what's going on recently a speed bump, and I've seen that in every category."

More specifically, a 12.9-inch iPad would likely do remarkably well in the enterprise market. One of the biggest criticisms for tablets as a product category is that it's hard to be productive on them. Offering a larger model would enable greater productivity, particularly if...

The iPad Pro's killer feature
In May, reports suggested that Apple was working on a new split-screen multitasking feature in iOS 8, which is one of the competitive advantages that Microsoft Surface enjoys. The rumored feature was supposedly only intended for the larger 9.7-inch model, most likely because it may be less usable on a 7.9-inch iPad Mini display.

If Apple reserved split-screen multitasking to the 12.9-inch iPad Pro, it could be the killer feature for the enterprise.

Big Blue will have a big impact
This is also where the IBM partnership comes into play. Big Blue will help beef up Apple's native mobile enterprise application library, as well as distribution through its global sales force, which has inroads with countless enterprise customers. Here's Tim Cook on the last conference call [emphasis added]:

We're very bullish about the future of the tablet market, and we're confident that we can continue to bring significant innovation to this category through hardware, software, and services. We think our partnership with IBM, providing a new generation of mobile enterprise applications, designed with iPad's legendary ease-of-use and backed by IBM's cloud services and data analytics will be one such catalyst for future iPad growth.

On the same call, Cook noted that tablet penetration within the enterprise market is relatively low, at 20%, compared to PCs. He believes that Apple can help get that figure to 60% in the foreseeable future. The iPad Pro combined with the IBM partnership could do wonders for enterprise tablet penetration.

Financial implications of the iPad Pro
When the iPad Mini launched in 2012, it was a double-edged sword financially. The effective move downmarket expanded Apple's addressable market and presented new revenue opportunities, but at the cost of lower profitability.

Immediately after launch, then-CFO Peter Oppenheimer confirmed, "The iPad mini gross margin is significantly below the corporate average." That contributed to the margin headwind that Apple faced in early 2013, as iPad Mini sales ramped up. Additionally, since the iPad Mini starts at lower price points, iPad average selling price declined as a natural result. 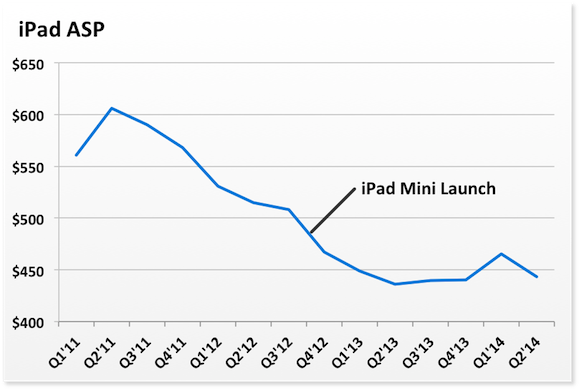 An iPad Pro would inevitably be priced higher than the iPad Air and fetch higher gross margins, which could help boost iPad average selling price (ASP) and profitability. The overall iPad product mix in terms of units would likely remain skewed toward the consumer-oriented Air and Mini, but the addition of the Pro could help mitigate the current downward trajectory.

The jury's still out on large tablets
After testing out Samsung's 12.2-inch tablets at CES 2014 earlier this year, I was quite skeptical about such large form factors, irrespective of original equipment manufacturer (OEM). Questions remain; but the important distinction is that any tablet this large is not positioned as primarily a consumer offering.

It may still be too early to call, but large tablets do offer much more potential in the enterprise, which is exactly what Apple would be going for.