Every quarter, large money-managers have to disclose what they've bought and sold via "13F" filings. While Fools don't always follow what the big money does, we can often glean an idea or two by tracing their footsteps.

Legendary investor George Soros, founder of Soros Fund Management, has a net worth of more than $25 billion and has been investing for more than 50 years. While today he may be best known for social and political activism, his investing reputation is largely tied to his $10 billion short bet against the Bank of England -- and essentially the British Pound -- back in 1992. This massive short was one of the driving forces behind the "black Wednesday" currency crisis that cost the U.K. Treasury more than 3 billion pounds in losses -- and netted Soros more than $1 billion in profit in just a few days.

The value of Soros Fund Management's stock holdings -- as reported on quarterly 13F filings -- increased by $3 billion to more than $13 billion in the quarter ended June 30. The fund's biggest moves included additions to its positions in elite tech companies Facebook Inc (NASDAQ:FB) and Apple (NASDAQ:AAPL). While blindly copying the trades of a hedge fund isn't a smart way to invest, it doesn't hurt to take a look at what the "smart money" is doing. Let's take a closer look at Soros Fund Management's big bets on Apple and Facebook.

Tech in transition
Many of the largest names in technology have become increasingly entrenched in our personal and professional lives over the past decade. This is being driven by two huge trends: Social networks and mobile computing. Facebook and Apple are, respectively, the two strongest players in these growing segments. Even businesses are using social networks to create spaces for employees to interact, and mobile technologies like smartphones and tablets -- especially when combined with cloud applications -- are becoming more capable business devices.

Apple's growth has certainly slowed over the past couple of years. However, management has begun using the company's massive cash generating ability to buy back stock and pay a dividend. Since the beginning of 2013, Apple has repurchased almost 9% of its outstanding shares -- that's $51 billion in repurchases -- and paid out $23 billion in dividends. The company still plans to return another $56 billion to shareholders over the next six quarters. Simply put, CEO Tim Cook and company are making a solid effort to grow per-share value, even as Apple remains the dominant name in mobile computing.

Meanwhile, Facebook's increasing user base -- already well over 1 billion regular users -- is having an enormous impact on its bottom line, with net income clocking in at almost $2.4 billion over the past year. A growing share of that income is coming from mobile advertising as users shift to handheld devices, where Apple remains a dominant supplier.

Where Soros fits in
It's important to understand that the information in these quarterly filings is quite limited. It can sometimes help us identify trends, but be careful not to look too deeply and create patterns that might not be there -- or might not be relevant to you. For example, here's a look at Soros Fund Management's Apple and Facebook holdings over the past six quarters: 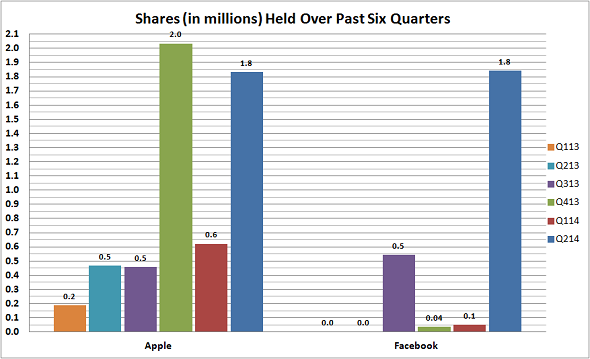 We have no way of knowing for sure why Soros' fund traded in and out of these stocks, sometimes drastically changing its positions from quarter to quarter. A 13F reports reveals only one thing: The fund's holdings at the end of the quarter. We don't know how many times the fund traded in a particular stock, how much it paid for shares, or anything else that would help us determine what the fund considers a fair value. By the time the 13F is released -- as much as six weeks after the reported period -- the fund may not even still hold those positions.

The point? For a fund like Soros', with a history of active trading, the 13F is best used as a source of ideas, rather than "must follow" trades.

Your portfolio should be a reflection of your goals and time frame
Soros has been one of the top investors of the past 50 years, and that makes his fund a popular target for investors looking for ideas, but don't fall into the trap of trading just because a hedge fund did.

What matters is whether Facebook and Apple belong in your portfolio. If you're looking for dominant, top-tier companies that have strong competitive advantages and rock-solid financials, there are worse places to invest. If you're willing to invest in them for the long term, these two companies deserve a long, hard look.