Through a series of quotas, tariffs, and programs that guarantee loans to producers, the U.S. has protected its sugar industry from the vagaries of free trade since 1789. Today, those programs have resulted in U.S. sugar prices being 20% higher than the world average. Now the government wants you to pay even more.

The Commerce Department has determined that sugar imported from Mexico is enjoying benefits from government subsidy that are hurting U.S. producers, so it plans to slap tariffs on the sweetener that could be as high as 17%, according to sources Reuters talked to.

One lump or two?
Over the years, because of protectionist government policies, U.S. sugar prices have on average far exceeded the world's. And though the gap narrowed in 2013, which undoubtedly upset producers, over the first seven months of this year the gap has widened substantially once more. Mind you, a few years back, when sugar prices were soaring, there was no similar complaint from the industry about the "volatility" they were enjoying. 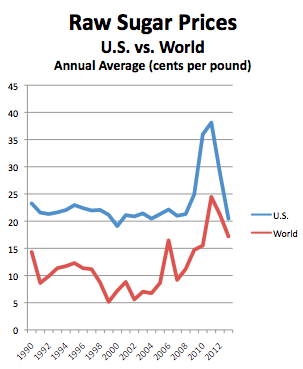 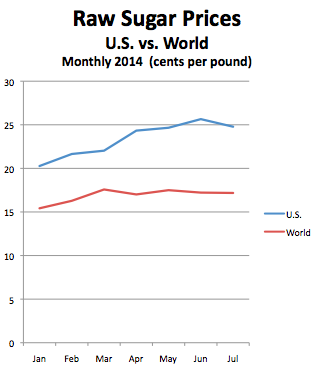 Alexander & Baldwin (NYSE:ALEX), whose Hawaiian Commercial & Sugar produced over 190,000 tons of sugar in 2013, saw its second-quarter revenues tumble 31.5% from the year-ago period because of lower prices. Operating margins plunged from 19.1% in 2013 to just 1.3% this year.

Losing our sweet tooth
Yet as the chart below shows, even as we've been paying more for sugar at the checkout, consumption from all sources of sweeteners is falling. Our sweet tooth peaked in 1999 and has been declining ever since. 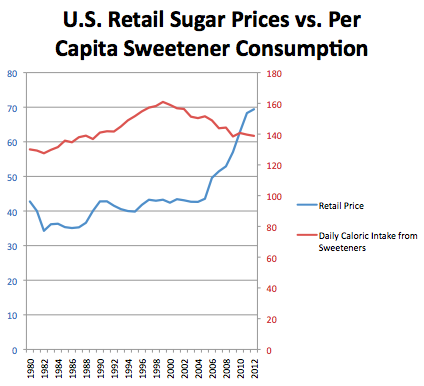 Sweeteners are taking up a smaller portion of our diet, but we continue to pay more. Data: USDA. Sweeteners include sugar, both raw and refined, high-fructose corn syrup, glucose, dextrose, syrup, and honey.

What the sugar producers are asking then is that consumers pay even more because we're eating less. While subsidized Mexican sugar may indeed be part of the problem, it's a law of economics that falling demand will also cause prices to drop, but after several hundred years of being coddled, producers have apparently forgotten that Economics 101 lesson. They're complaining even though the loan guarantees, quotas, and tariffs ensure they won't receive any less than around $0.21 per pound.

Further, the sugar being imported into the U.S. is largely estandar sugar, or a raw, less refined product that's not really available in the U.S. It's not easy to make price comparisons between the two products, so to say Mexican imports are the cause of falling prices here may be a specious argument to make.

A spoonful of sugar isn't helping the medicine go down
Slapping new tariffs on sugar will have far-reaching effects. Everyone from snack food and candy makers to cereal companies and soda jerks will feel the pinch.

Chocolate maker Hershey (NYSE:HSY), which saw a 290-basis-point increase in profit margins in last year's second quarter as a result of lower commodity costs, now says the situation is reversing and rising costs forced it to raise its prices to protect margins. It's expecting them to continue rising this year and is forecasting adjusted gross margins that will be lower than they were in 2013.

Worse, according to Commerce Department data from 2006, for every job in the sugar industry saved, three in the candy business are lost.

Flat like day-old soda
It's also a cost that Coca-Cola (NYSE:KO) and PepsiCo (NYSE:PEP) really can't afford to pay right now. Soda consumption is already on the decline and raising prices to meet the higher costs won't endear them any more to consumers.

Diet Coke volumes have been in freefall for the past decade as concerns over artificial sweeteners like aspartame and high fructose corn syrup created a backlash and sent sales tumbling. Pepsi, as well, was caught up in the vortex, and its diet beverage sales have witnessed similarly distressing declines. 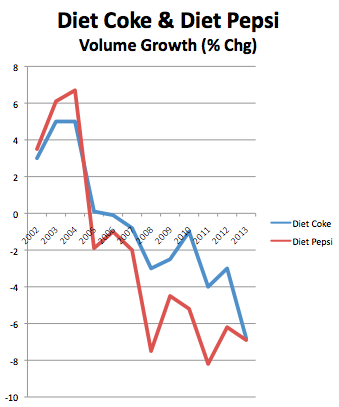 Coke has been trying to find alternatives to the artificial sweeteners and just recently introduced into the U.S. a stevia-based soda, Coca-Cola Life, that offers a blend of real sugar and the plant-based sweetener. However, when it infused its Vitaminwater with stevia, drinkers revolted over the changed taste profile and Coke quickly dropped it. Consumers could recoil just as fast with the lower-calorie soda, but having to raise prices just as its trying to introduce the product likely wouldn't set well.

Pepsi also markets a stevia-sweetened soda in Australia, Pepsi Next, and Dr Pepper Snapple Group (NYSE:DPS) is similarly exploring the sweetener as an alternative for its Core 4 TEN line of beverages made with aspartame, high-fructose corn syrup, and acesulfame potassium that's never caught on.

Not such a sweet deal
Mexico is aware of the friction its exports have caused and last year its soft-drink industry voluntarily bought up 400,000 metric tons of sugar. That hasn't stopped the Commerce Department from ruling Mexico was dumping sugar onto the market and taking under consideration the possibility of new tariffs. It's possible it won't go through with the measure, and the rising disparity between domestic sugar prices and those on the world market should stay its hand.

For too long we've condoned the transfer of wealth from consumers to corporations. Margins at food and beverage makers will be compressed, jobs will be lost, and consumers will feel its effects in their wallets. The time has come to extract America's sweet tooth.