Despite Sherwin-Williams (NYSE:SHW) having to wipe the canvas clean several times during the year, it has still painted a picture of growth that has sent the stock up by nearly 20% so far in 2014. A diverse geographic palette, a continuously improving housing market, and an ability to contain costs even as raw materials expenses increase suggest the company will continue to paint the town red.

Getting off on the wrong foot
Sherwin-Williams entered 2014 having just learned it and several other paint manufacturers would be liable for more than $1 billion in damages for lead-based paint they sold decades ago. Even though the paint was legal to sell at the time, a California judge creatively applied public nuisance laws to a situation that would normally be covered by product liability claims, forcing Sherwin-Williams, NL Industries, and ConAgra -- which once owned Beatrice that had once owned W.P. Fuller -- to fix up homes and apartments that their landlords had neglected. Not surprisingly, the paint makers have appealed the decision.

Following a brief spurt in the first half of January, Sherwin-Williams' stock tumbled 10% from its then-historic high as the company headed into its end-of-year earnings report. Investors shouldn't have been so worried.

Paint by numbers
Increased paint sales volume at its paint stores unit in the second quarter, along with a number of acquisitions, led to a 17.6% jump in sales from the year-ago period, while net sales in its consumer division rose 6.6%. The U.S. housing market has been by no means robust, but after the depths of the financial crisis in 2008 and 2009, it has staged an occasionally wobbly comeback, driving demand for coatings from both professionals and consumers.

It wasn't much different in the second quarter as the domestic building and remodeling markets continued to grow. Nonresidential buildings are expected to play an increasingly important role in driving future paint and coating demand. The paint stores division, which is comprised primarily of the U.S. and Canadian markets, accounted for 62% of net sales and 71% of segment profit in Q2. 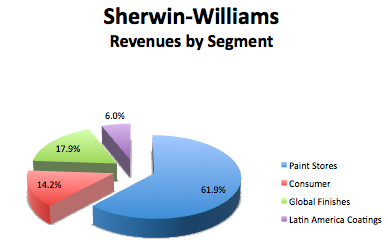 When things start to go south
We already knew that Sherwin-Williams' growth plans south of the border were in trouble: Mexico's competition regulators had previously rejected the $2.3 billion takeover of Consorcio Comex, fearing it would become too big and too powerful and would crowd out the smaller paint and coatings operators in the country. However, regulators' decision in April to fully reject the plan still came as something of a surprise.
Comex has 3,300 paint stores, making it second in size only to Sherwin-Williams' 3,900 locations. The combination would have given it as much as a 58% share of the Mexican paint market, or more than 10 times the share of its nearest competitor. Despite Sherwin-Williams' willingness to divest certain assets to make the takeover more palatable to regulators, it remained a hurdle too high and led to PPG Industries (NYSE:PPG) announcing in July that it would make a bid for the Mexican paint maker.
PPG might not get any better MPG
Although some analysts think PPG might run into anti-competition concerns as well, the coatings rival's footprint in the region is much smaller than Sherwin-Williams', where the merger was expected to boost its Latin America division sales from 5% to 11% of total company sales.
That could be a blessing in disguise for Sherwin-Williams. The Latin American markets remain in a funk; even as the Comex union was seen as a means of expanding its business in the region, the segment remains a drag on performance as growth has turned into contraction. 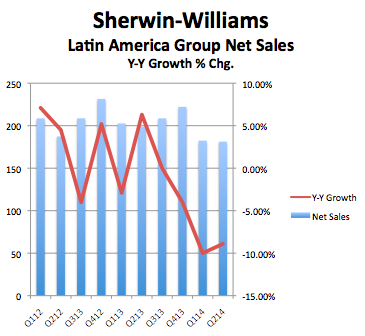 Much of the headwind is related to currency exchange. While paint volumes have been soft in Latin America, this past quarter currency fluctuations actually decreased net sales by 11.3% and by almost 14% over the first six months of the year. If PPG is successful in acquiring Comex, it may more fully feel these effects as well.

Like white on rice
Similarly, raw materials costs for items such as titanium dioxide could be a concern if they start to rise again. Following a year in which TiO2 manufacturers saw prices peel back some 10% to 20% from the record highs they reached, manufacturers have threatened to raise prices again this year. Although Sherwin-Williams has been largely able to pass past price increases along to customers, consumers could balk at continuously paying up making further increases harder to implement.

While titanium oxide costs are just as much of a concern for Benjamin Moore, PPG, and Valspar as they are for Sherwin-Williams, the latter at least is seeing more pressure these days from the likes of high-density polyethylene, which is driving up the cost of plastic packaging. Other rising costs include crude oil, natural gas, propylene, ethylene, and tinplate, but these raw materials are not of a material size just yet and so shouldn't provide any drag.

Same old, same old
In short, 2014 has been no different really for Sherwin-Williams than what the past few years have produced. The paint maker has consistently increased revenue, raised its dividend, bought back more stock, and ultimately returned value to shareholders despite numerous challenges. 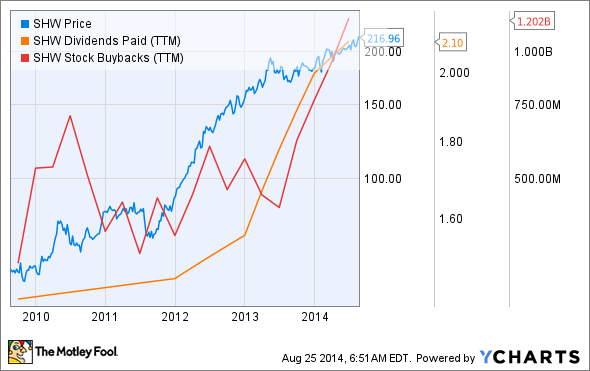 This year has similarly been in line with how the coatings specialist has been viewed by the market for some time, and it looks like it will continue to perform just as well in the future.