Ford Motor Company's gains in China have been nothing short of impressive, but will it be a short-lived success?

Any competitive person will tell you that one of the most frustrating things in the world is giving your opponent a head start. That's exactly what Ford Motor Company (F -2.09%) did in the world's largest automotive market, China. General Motors has taken a decisive sales lead in the region.

Fortunately for Ford investors, the folks at the Blue Oval have taken its late market entry in stride and have witnessed vehicle sales surge over the last two years. The questions are: Will this surge continue? And can Ford compete with GM for the title of China's best-selling foreign automaker? 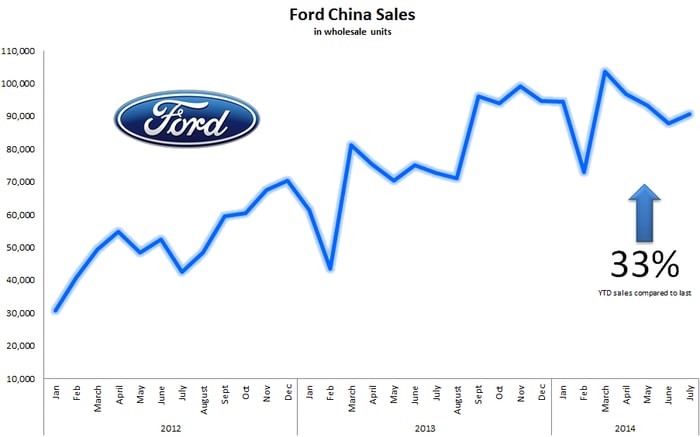 Just last month, Ford posted year-over-year sales gains of 25% in China. Perhaps even more impressive than that is that last month's gain checked in as Ford's second-worst monthly performance in 2014. When your worst two monthly sales gains check in at 17% and 25%, business is good.

So, with Ford's year-to-date sales improving 33% over the same time frame last year, are sales peaking or gearing up to move higher?

The road ahead
While the automotive industry can throw automakers a curve ball at any time, all indications are that Ford's sales in China will continue to move higher in the years ahead. There are two reasons for this.

First, Ford has yet to unleash its entire vehicle lineup in the region, which will easily, and incrementally, boost the automaker's sales figures over the next couple of years. The folks at the Blue Oval know what works in China, and the Fiesta and Focus remain perennial best-sellers in the country in their respective segments. Ford's Mondeo, known as the Fusion here in America, is continuing to gain traction with consumers and could rise to be the automaker's next big hit.

In addition to the Mondeo, there are wild cards such as the 2015 Mustang, which will debut soon in China. In all, Ford intends to roll out 15 new vehicles in China by the end of next year to accelerate its sales pace. Management has placed its bet and remains confident in the road ahead as Ford currently has three additional plants under construction in the region to complement the seven it already has.

Second, in addition to Ford's organic growth, China's exploding market and growing middle class will unleash plenty of first-time buyers in the near- and mid-term. In 2013, China sold nearly 22 million vehicles, which outpaced the second-largest market, the United States, by roughly 6 million vehicles. While the United States is expected to extend its sales lead over other markets, it won't keep up with vehicle sales growth in China. Consider that by the end of the decade, vehicle sales in China are expected to reach 30 million, which would be nearly equal to the expected sales in the United States and Europe combined.

Can Ford overtake GM in China?
All indications are that Ford's sales in China will continue moving higher, with double-digit increases in the years ahead, but can it make up for a late market entry and catch rival GM? Of course it can -- but don't count on it anytime soon. 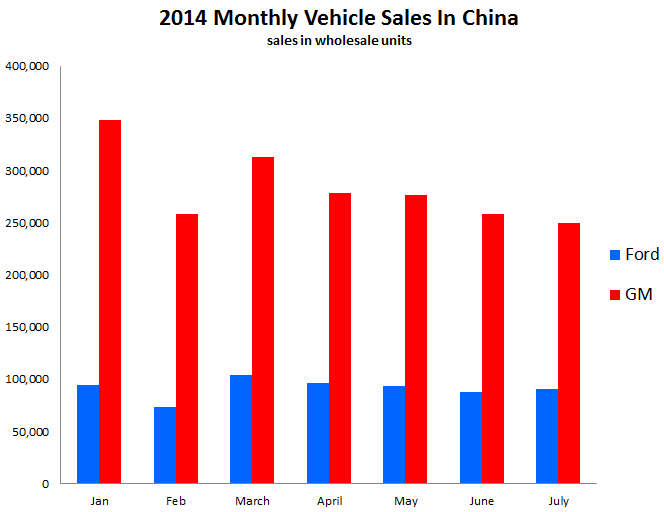 Investors can expect Ford to continue narrowing the sales gap with GM, but overtaking or even matching GM would be an extremely difficult task that will likely take closer to a decade, or longer, to achieve. Here's the kicker, though: Investors don't need Ford's sales in China to match GM's for it to be a success. Ford is aiming to quintuple its revenue generated from its Asia-Pacific region -- of which China is by far the biggest market -- by 2020, and accomplishing that will be a massive success and would deliver a large positive impact on Ford's financial performance.

Yes, the automotive industry can throw investors and automakers a curve ball at any time, but it seems almost certain that Ford's sales in China are just getting started, and that's a great thing for Ford investors.