More than a century ago, John D. Rockefeller shaped the oil and gas industry into what we know it as today. His vision was the concept of the integrated oil and gas company. Instead of focusing on just one aspect of the business, such as production or refining, he built an empire that did all of these things, and made a fortune along the way. By having operational control of every step in the oil and gas process -- production, transportation, refining, and retail -- Standard Oil provided an incredible amount of pricing and cost control. The original Standard Oil was divided up into several smaller parts, but it laid the groundwork for how the biggest names in oil and gas operate today.

The household name oil companies that we all know like ExxonMobil and Chevron were all built on John Rockefeller's model: vertical integration. The problem is, though, that these companies are not vertically integrated anymore, and that drastically changes the way we need to think about them as investments. Let's take a look at why we should stop calling these companies integrated and how that impacts your investment thesis.

The reason that oil and gas companies got the label "integrated" and not "diversified" is because, at one time, their operations across the entire value chain were built to take one barrel of oil from the source all the way to the end consumer by filling their gas tank at the pump or selling you chemicals derived from oil and gas. In theory, this business model gives the company greater control. Since it doesn't need to farm out transportation costs to a pipeline company, or sell it to a refiner only to buy it back to use in retail locations, it could lower its costs and maximize the value of that barrel of oil by selling it as its refined products.

If we look at the assets held by Big Oil companies today, on the surface, it looks as though they are still integrated oil and gas companies. They all generate revenue from the production, transportation, refining, and retail sales of oil and gas. However, calling them integrated businesses is like saying you have an apple pie when all you have is a bushel of apples and a couple cups of flour and sugar. These companies are more like a random collection of assets in different facets of the oil and gas industry, and for the most part, they rarely complement each other to add value to the company.

Quite possibly the most egregious example of this is BP's Whiting refinery in Indiana. It recently completed a $4 billion upgrade at the facility to modernize it as well as add a 102,000 barrel per day hydrocracker unit. These upgrades not only increased capacity, but they also completely changed the type of oil the facility processes. Now, Whiting is geared to run 80% heavy/sour crudes, which is the type of oil produced from Canadian oil sands. These crudes are generally less expensive, and refineries that can run this type of crude in the U.S. can reduce their feedstock costs.

As a stand-alone investment, it makes a lot of sense for BP. It should lower feedstock costs and increase margins and cash flow for the business. If we look through the lens of a vertically integrated company, though, it doesn't make as much sense. Why? Because BP doesn't produce any oil from Canadian oil sands. In fact, it only produced 1,000 barrels of oil per day total from Canada in 2013. Granted, the company does have a non-operating interest in a few oil sands projects, but the projected output from these projects isn't even enough to provide this new refinery with half of its heavy oil capacity, and they aren't likely to all come online until beyond 2020.

This isn't the only example, either. Take a look at Chevron's American operations. In the fiscal year 2013, Chevron produced 657,000 barrels per day of crude oil in the U.S. At the same time, its U.S. refineries processed an average of 774,000 barrels per day. Thinking of the company as an integrated company, then, a majority of the oil supplying its refineries would be sourced from the U.S. and supplemented with oil from elsewhere. The reality of the situation is very different. 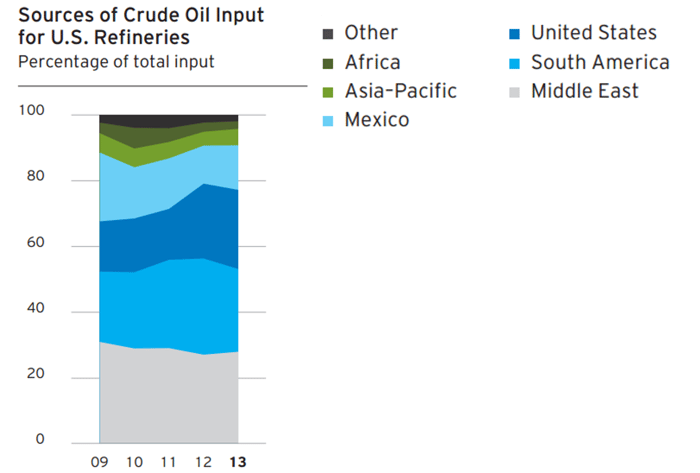 In fact, total U.S.-sourced crude for Chevron refineries was just barely more than 20% of total throughput -- around 150,000 barrels per day. A majority of the oil for these facilities came from Mexico -- where Chevron has no operations -- and the Middle East -- where Chevron only generates 87,000 barrels per day. What this means is that the company is routinely selling its American produced oil to other refineries in the region, while sourcing crudes for its own refineries from elsewhere.

The integrated oil and gas space is littered with examples like this. They all have assets in every facet of the value chain, but very rarely work in ways that complement each other. To be fair, part of the reason these assets have become detached is because the geography of oil production has shifted immensely since when these refineries were first built, and you can't exactly close up shop and move these multibillion-dollar investments every 5-10 years to follow production.

With a conglomerate of not necessarily correlated business segments, some investors might ask why integrated majors don't separate themselves into completely business altogether? There are two arguments that support this idea. The first one is that all Big Oil companies generate a disproportionate amount of their earnings from oil and gas production, and the results from other sectors are pretty much ancillary.

The second reason this seems attractive is that it has been done before with some success; both Marathon Oil and ConocoPhillips spun off their refining and retail segments into separate entities a few years ago. By liberating the downstream businesses, it allowed them to make investments more strategic for the downstream side of the business, provide a decent dividend for its shareholders, and buy back loads of shares with excess cash. 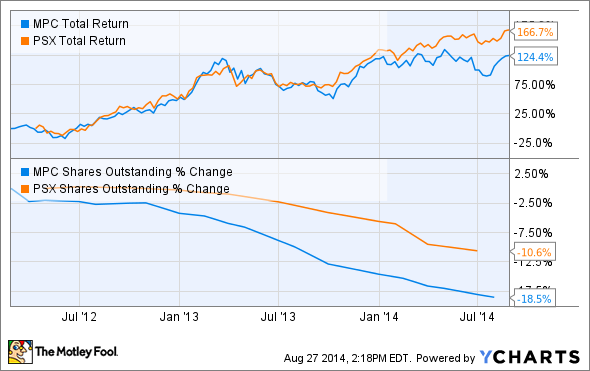 Does this mean you should stay away from Big Oil? Not necessarily. One argument against divesting these assets is that it provides some diversity within a single investment. Basically, you have separate entities operating under one roof that act in opposition to each other. For example, the production side will benefit immensely when oil prices are high, but those same high oil prices will likely cut into the profitability of refining and chemicals operations because feedstock costs are increasing. And the opposite happens when oil prices are low.

The overall impact of this dynamic means that as oil prices slump, Big Oil companies will not be as drastically affected as companies that deal exclusively with the production side of the business. However, during times of rising oil prices, Big Oil players will not reap the benefits as much.

As the years have passed, the benefits of vertical integration have slowly eroded at these companies to the point that they really can't be called integrated anymore. Instead of fighting this change, some companies are actually embracing. BP recently announced that it is spinning off its Lower 48 exploration and production business into its own entity that will be wholly owned by BP. This move, as well as its 19.75% interest in Russian company Rosneft, are turning BP into more of a holding company.

It's hard to say that this is what integrated oil and gas companies will become in the future, but it's not a bad idea. After all, John Rockefeller made way more money after Standard Oil was broken up into multiple parts than when it was a single entity. Based on the current portfolios for Big Oil, though, they certainly don't pass the "integrated" test anymore.