Worries over a potential breach of customers' credit card data have taken some of the steam out of Home Depot's (NYSE:HD) big stock rally. After hitting a new high of $94, shares fell below $90 this week. 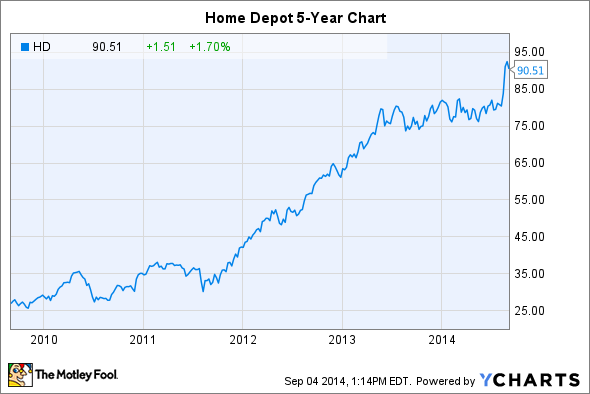 Investors who have been on the fence about buying this fast-growing retailer might want to consider a pullback like this as an opportunity to take a fresh look. Beyond it getting (slightly) cheaper lately, there are other good reasons to like Home Depot's stock here.

Industry-thumping sales growth
For one, the retailer is posting outstanding growth. Sales at existing locations rose by a scorching 6% in the second quarter, which is the busiest time of the year for home improvement shops. The gain came on top of an 11% jump over the same period last year. And as usual, Home Depot's performance was solidly ahead of competitor Lowe's (NYSE:LOW), which posted 4% comps in the second quarter.

Taking a broader look at revenue, you can see that Home Depot has staged a huge rebound over the last five years, with trailing 12-month sales up 22% since 2009. 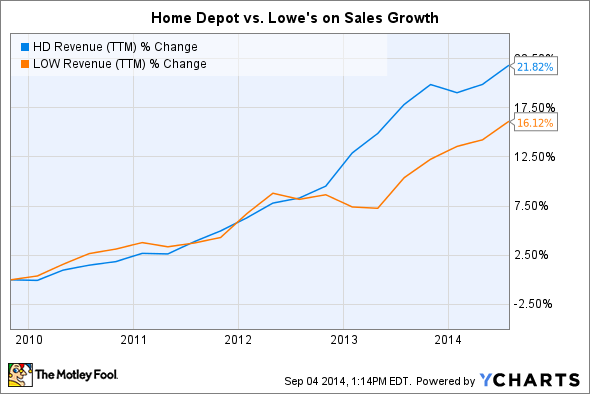 Sure, the housing market has cooled off this year. But with home prices still climbing and renovations on the upswing, Home Depot should continue to benefit from broad improvements in the economy.

Improving profitability
Meanwhile, profit has been growing at a much faster pace than revenue. Earnings were up 22% last quarter, which is about par for the course for Home Depot these days. The retailer posted a 25% jump in per-share profit in 2013 and expects to earn $4.50 this year, which would make for a 20% improvement over the prior year.

A major factor in that spiking profit growth has been the rising efficiency of the business, which shows up in its return on invested capital, or ROIC. That figure hit 22% last quarter, almost triple the return that Home Depot managed at the lowest point of the housing crisis. 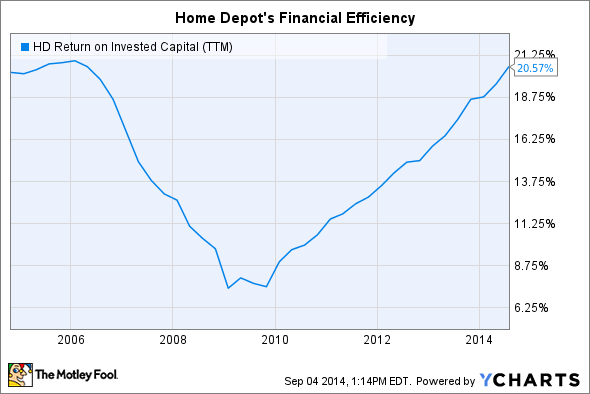 Management's long-term goals involve expanding ROIC to 27% by next year. And considering its success so far, the executive team is likely to hit that target and keep Home Depot's profit machine chugging along.

More cash for shareholders
All of those sales and profit gains are translating into a huge amount of cash flow that Home Depot can reinvest into the business or distribute to shareholders. Over the past six months, in fact, the company generated $3.5 billion in operating cash. Since Home Depot isn't expanding its store base, it can prioritize returning much of that bounty to shareholders in the form of dividends and stock repurchases.

And the company has been doing just that. It spent $3.5 billion so far this year on share buybacks, helping push its outstanding share count lower. Home Depot also shelled out over $1 billion on dividend payments. Still, that amounts to less than half of the retailer's earnings, which suggests that a significant dividend hike shouldn't be too far off.

Foolish wrap up
At about 20 times the $4.50 per share that Home Depot will likely earn this year according to consensus earnings estimates, the stock isn't particularly cheap. But investors are getting some high-quality earning power for that price, in addition to the likelihood of a growing pile of cash returns from dividends and share buybacks.