Investors in pharmaceutical giant Merck (NYSE:MRK) have to be liking what they've witnessed in recent years as Merck's stock has vaulted to its highest levels since prior to the Great Recession. However, back Merck's chart out to a 15-year view and things aren't nearly as pretty. Although Merck's healthy dividend payouts have been a boon to investors, its share price has actually moved lower on a nominal basis, as you can see below. 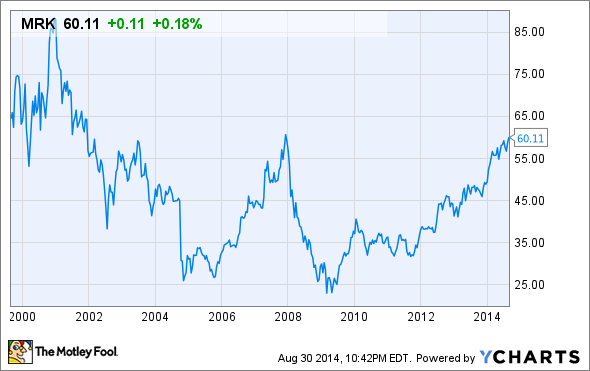 The big question we need to ask ourselves is whether or not Merck can continue to head higher from its current level, or if the stock has hit its ceiling. Today, I'll attempt to answer this question.

Before I do, however, a quick word on the dynamic nature of the stock market. Keep in mind that there are two sides to every trade, and that just because I present a positive or negative view of Merck doesn't mean that my prediction will necessarily be correct. You should formulate your own opinion and, if you choose to invest in Merck, make decisions based on your unique investing needs. That's something to keep in mind as you read on.

Merck by the numbers
Here are a few important financial metrics you need to know about Merck and its peers:

Although all four of these companies are in essentially the same boat when it comes to dealing with the patent cliff, some discernable differences do emerge between them upon closer inspection.

In terms of projected growth rate Merck stands atop the pack with a five-year compounded growth expectation of 4%. On the other hand, Merck's gross margins are toward the lower end of the aforementioned group, behind GlaxoSmithKline and Pfizer. For both AstraZeneca and Merck, the culprit appears to be higher expenses tied to merger and acquisition activity, as well as the negative effect of generic drugs on their branded products.

In terms of forward P/E ratio, Merck tends to sit toward the middle of the pack with Pfizer looking like the cheapest of the four. Keep in mind, though, that all four of these companies are either facing the loss of exclusivity on blockbuster drugs in their pipeline, or they're currently suffering from the effects of those losses, so their projected P/E ratios could actually head higher depending on how quickly revenue gets eaten away.

Finally, GlaxoSmithKline and AstraZeneca offer the best dividends out of these four big pharmaceutical stocks. One key difference that should be noted, both Glaxo and AstraZeneca are headquartered in the U.K. which has a markedly lower corporate tax rate than Pfizer or Merck deal with in the U.S. Being able to keep more of their profits, Glaxo and AstraZeneca have an easier time returning more to shareholders.

Is Merck a buy?
Now that we've taken a closer look at how Merck stacks up next to its peers when it comes to surface-reaching financial metrics, let's return to the original question proposed at the beginning: Is Merck a buy, right here, right now?

My answer to this question is "No," but I'll admit that I could see myself changing my mind based on a couple of factors. Allow me to explain.

The primary allure of Merck at this very moment is the potential of pembrolizumab, or pembro. Pembro is part of a new class of drugs known as anti-PD-1 inhibitors which work by blocking PD-ligands from binding with PD-1 receptors. By breaking up this interaction it's believed that T-cells in a patients' immune system will be able to more easily detect cancer cells and cause their destruction.

It's certainly hard to argue against its success with pembro awaiting an FDA decision as a treatment for advanced melanoma after delivering an overall survival at the one year mark of 81%. With pembro also being tested in around 30 other indications, in both monotherapy and combo settings, it's possible its cancer-fighting success will transfer over to other cancer types beyond melanoma. I'm of the opinion that if Merck does head higher, it will be because of pembro's success.

But, I'm also a realist and I find it a tough pill to swallow that a solitary drug, even one with blockbuster potential, can send its shares ever higher.

At the forefront of my concerns are ongoing patent losses which will likely negate almost every step forward Merck takes with other areas of its pipeline. Over the past two years both Singulair (previously a $5 billion per year asthma drug) and Temodar have been exposed to generic competition, while cholesterol drugs Zetia and Vytorin, which will bring in about $4.5 billion this year, are set to lose their protection from generic competition in 2016 and 2017, respectively. For Merck it's not a case of two steps forward, one step back -- it's two steps forward, two steps back.

Merck's acquisition of Idenix Pharmaceuticals in order to beef up its hepatitis C offerings also didn't hit home with me personally. Although Idenix's nucleotide compounds have shown promise in previous studies, Idenix also has a questionable development history that includes three drugs being shelved due to safety issues just since 2010. I could certainly understand Merck wanting to explore different avenues to bring its own combo, MK-5172 and MK-8742, to market given that initial estimates place the hepatitis C market potential at $20 billion! However, the $3.85 billion price paid for Idenix has all the potential to be a bad deal considering its aforementioned pipeline development snafus.

Finally, Merck is also seeing increased competition for a number of key drugs. Type 2 diabetes drugs Januvia and Janumet, for instance, are DPP-4 inhibitors that have been a prescription staple for physicians since shortly after their approval by the Food and Drug Administration. However, newer therapies, such as Johnson & Johnson's Invokana and AstraZeneca's Farxiga could give DPP-4 inhibitors like Jaunvia/Janumet a run for their money. These two new type 2 diabetes therapies are SGLT2 inhibitors, and rather than working through the liver and pancreas they block glucose absorption in the kidneys and allow patients to remove excess glucose through their urine. More importantly, SGLT2 inhibitors were also shown to cause weight loss in patients as a welcome side effect. DPP-4 inhibitors, in contrast, are weight-neutral. I fully expect SGLT2 inhibitors to continue to push DPP-4's for market share in the second-line treatment indication thanks to this pleasant side effect and their fairly equal success in HbA1c reduction.

As I said, I could very easily like Merck stock here if pembro succeeds in multiple additional indications and its Idenix buyout works in its favor, but there seem to be far too many questions than answers at the moment.